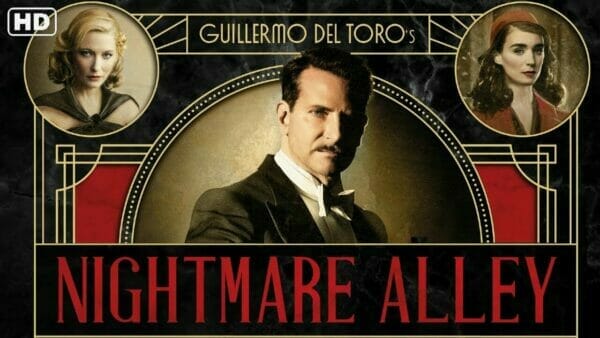 Nightmare Alley (2021 Movie) is a 2021 American neo-noir psychological thriller film directed by Guillermo del Toro from a screenplay by del Toro and Kim Morgan, based on the 1946 novel of the same name by William Lindsay Gresham. The film features an ensemble cast including Bradley Cooper, Cate Blanchett, Toni Collette, Willem Dafoe, Richard Jenkins, Rooney Mara, Ron Perlman, Mary Steenburgen, and David Strathairn. It is the second feature film adaptation of Gresham’s novel, following the 1947 version. The film focuses on Stan Carlisle (Cooper), an ambitious carny, who hooks up with a corrupt psychiatrist, Dr. Lilith Ritter (Blanchett), who proves to be as dangerous as he is.

It was named one of the top ten films of 2021 by the National Board of Review and American Film Institute. It also received eight nominations at the 27th Critics’ Choice Awards including Best Picture and Best Director for Del Toro.

The Rise and Fall of Stanton Carlisle. Nightmare Alley 2021 Review