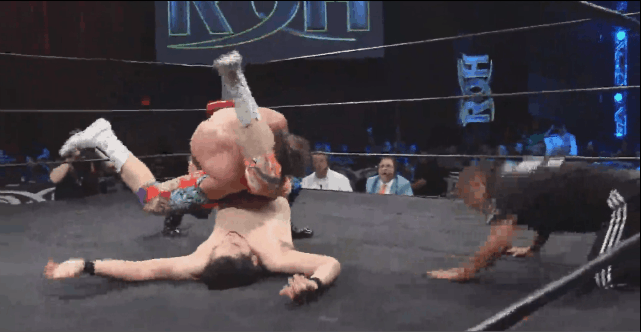 Boy, you wanna talk about a total clash of personalities. Pre-match, Yano throws the remaining water from his water bottle onto Silas. Yano then begs off from Silas as the bell rings. We get tons of the usual Yano stuff, and the crowd just eats it all up. We get the same deal where he doesn’t know how to untie the turnbuckle pad because they’re different then what they got in Japan. He succeeds in freeing one, and levels Silas with it.

Yano decides it’s time to wrestle for a hot minute, but then decides it’s hair pulling time. Toru Yano goes for the low-blow, but Silas blocks it, and hits him with a cutter for a near fall. Yano uses the exposed turnbuckle, and gets a near fall. He follows it up with low blow while he distracts the referee, which gets him another near fall. Silas finally has enough, and uses both of those tactics in succession to get himself the win! This was one of the better Yano matches I’ve seen recently truth be told. **

Post-match, Silas attacks Yano some more, but The Briscoes make the save!

Christopher Daniels get some promo time where he talks about Ladder War. He says he’s always prided himself on being the smartest man in the ring, and in wrestling. Daniels goes on to talk about he lives for winning championships. He says he’s an awful father, an awful husband, and the only thing he’s ever been good at is pro wrestling. Daniels says he’s going to do everything it takes to hold onto the thing he loves most in this world. He promises The Addiction’s reign will last forever. What a freakin’ promo! 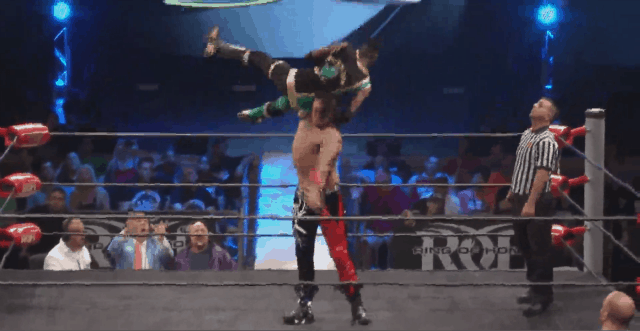 We get some highlights from Damian’s attack a couple of weeks ago on RoH TV. Sullivan joins the commentary table. The match plays a completely secondary role to what’s happening at the commentary table. Sullivan calls Corino “Mukon”. Corino wants to know why Sullivan continues to choose BJ over him. Sullivan tells Corino he’s always been a child, he couldn’t keep his mouth shut, and he wanted his own way. He couldn’t accept evil. Corino says Sullivan made him leave his wife and child, and it still wasn’t enough for Sullivan to favor him over Whitmer.

Sullivan calls Martinez “the reincarnation of the Purple Haze”, who is something born of the darkness. Corino pleads with Sullivan to tell us why. After Damian finishes Cheeseburger off, Whitmer climbs into the ring, and assaults him with the Golden Spike. Will Ferrera runs in to make the save, but fails. Sullivan tells Corino to get in there, and show him what’s he got. Meanwhile, I continue to stay both intrigued and confused. SQUASH

A String of Promos!

Adam Cole gets some more promo time to hype up the main event tonight as he teams with Hangman Page to take on Hiroshi Tanahashi and Michael Elgin in the main event.

We come back from commercial with Corino holding the Golden Spike that Whitmer used on him back at Death Before Dishonor. Corino wonders if they want him to meet them in “the desert”. Corino says he will, and lets out a sinister laugh. Whitmer’s promo post-match is shown, as he tortures Corino with the fact that he was gifted with “the reincarnation of the haze”, that he’s being given spiritual guidance by Sullivan, and that if Corino just gives in, it might be both his and everyone’s salvation. What’s happening anymore guys?

Time to rundown the All-Star Extravaganza Card! Bobby Fish, Jay Lethal, and Adam Cole get some promo time during the rundown.

~Ladder War VI for the RoH World Tag Team Titles: The Addiction defend against The Young Bucks and The Motor City Machine Guns

~Not Mentioned: Dragon Lee vs. Kamaitachi, and Hangman Page vs. Kyle O’Reilly 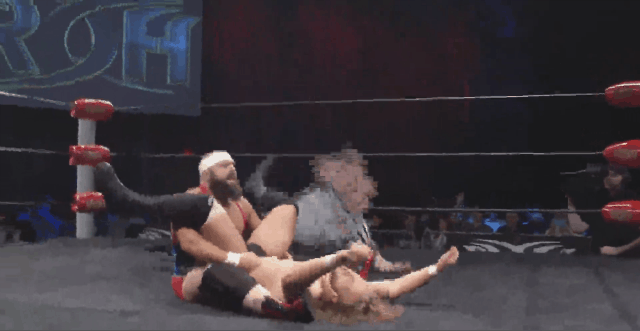 Kyle O’Reilly joins the commentary table for this one. Corino on commentary is dynamite here. He’s using all of the personal stuff that’s happened to him, and putting it on Kyle’s feud with Cole. Corino clearly isn’t okay guys. Tanahashi & Elgin were having their way with Adam Page, before The Bullet Club start taking some shortcuts. Cole and Page work over Tanahashi for a while, with Cole gloriously mocking Tanahashi the whole way. Tanahashi finally makes the hot tag off of a neckbreaker, and Elgin starts running both the Adams the heck over. Page turns it all around with a big DDT as we head to commercial.

We come back with Cole’s destroyer attempt, but Elgin moves out of the way! Corner german suplex! Here comes Tanahashi, who dishes some mockery Cole’s way. After a striking exchange, Tanahashi nails the slingblade, and both men tag out! Elgin absolutely destroys Page with a lariat, and a powerbomb for a near fall. Page almost steals one with the slingshot clothesline! Elgin has had enough, and nails a string of moves that you know Page isn’t going to kick out of. Wonderful tag team match with some great tension built by the commentary team for what’s going on with O’Reilly & Cole. *** and ¼ *

Overall Rating: 6 out of 10 Perfectly fine go-home show for Ring of Honor this week. I think your enjoyment will depend on how into the “EVIL” storyline, but the main event and Daniel’s promo are both worth your time. I’m personally looking forward to All Star Extravaganza, and I hope everybody else is too.