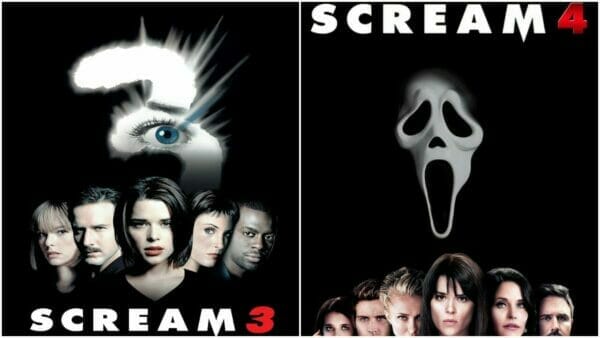 With Scream 5 (2022 Paramount) in theaters this week we’re looking back at the Scream movie franchise! On this episode they discuss Scream 3 and Scream 4!

Scream is an American meta slasher media franchise based on four films, with a fifth slated for release in 2022. The franchise includes a television series, merchandise, and games. The film series was written by Kevin Williamson, with the first four films directed by Wes Craven. The series stars Neve Campbell, Courteney Cox, and David Arquette, and grossed over $608 million in worldwide box-office receipts. Campbell, Cox, and Arquette have appeared in all four films to date, as has Roger L. Jackson, who voices the various Ghostface killers. All will appear in the fifth film. The supporting film cast usually changes with each installment, with a few exceptions: co-stars Jamie Kennedy and Liev Schreiber featured in each of the first three films and Marley Shelton appeared in the fourth film and will also return in the fifth film.