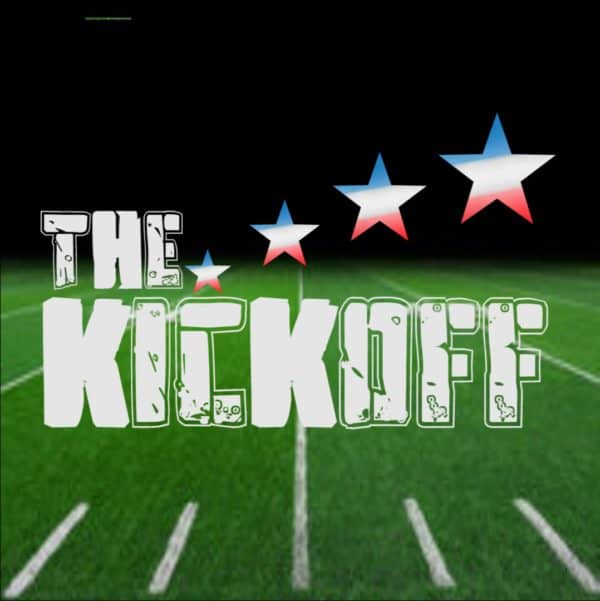 On this special episode of The Kickoff, Sean Garmer slides into the host chair for an under the weather Harry Broadhurst (we hope he gets well soon,) along with the regulars Erik Watkins, Jason Teasley, and Brandon Biskobing to preview the 2019 National Football League Season.

The guys discuss big stories like the retirement of Andrew Luck, the starring role of Jacoby Brisset, JaDeveon Clowney and Laremy Tunsil going to new teams, along with giving predictions for each of the eight divisions, wildcard picks, and Super Bowl picks too. Although it is a long show, it is certainly one you don’t want to miss with the NFL season less than a week away.

Ladies and gentlemen welcome to The Kickoff with Harry Broadhurst, Erik Watkins, Jayson Teasley, Brandon Biskobing, and producer Sean Garmer. This is not your traditional football show. Rather than breaking down every single game, we give you all the must-know information in a debate-style. While encouraging each other to speak their minds. Whether right, wrong or just plain crazy.

Jason Teasley, the man, the myth, the legend, in his own mind. A lifelong New York Giants fan, Fantasy football junkie and the residential evil ginger that brings his insights and opinions whether warranted or not.

This lifelong Jacksonville Jaguars fan started out with watching games and staying up late for Sunday and Monday night. It spread to college, and eventually just about every single sport in the book. By the time he graduated from college, all his friends and family thought Erik would be better off as a sportswriter. Perhaps a journalist, or a commentator than anything to do with math (boy were they right). So, after wandering around with a degree and looking for a job, he started a blog. The blog turned into some freelance work. After that, work led him right here talking about the game that he loves.

A longtime lover of all things New York, including the New York Yankees and New York Giants, Brandon graduated Seton Hall University and went into broadcasting. Since then, he’s then been in the booth for all sorts of different sports. The crew is always glad he can take the time to spout off his opinions and knowledge about the game of football each week on The Kickoff.

Sean studied Journalism at the University of North Texas and was born in Arkansas. Thus his favorite college team is the Arkansas Razorbacks. However, all of his professional football loves come from the Dallas-Fort Worth area, where he spent 20 years of his life. So, that means he is a huge Dallas Cowboys fan. An avid fan of watching football game film, learning about the history of the NFL, and just an all-around lover of the game. Most of his professional writing comes from spending years covering soccer in various forms, but he’s also covered football, wrestling, and video games as well.