I generally like solitaire-derivative games.  My favorite is still Regency Solitaire, just because of the novelty but I’ve played half a dozen of these types of games and most of them fit into the same mold.  Ancient Enemy fits in nicely as well but there is one hitch that is rather annoying. 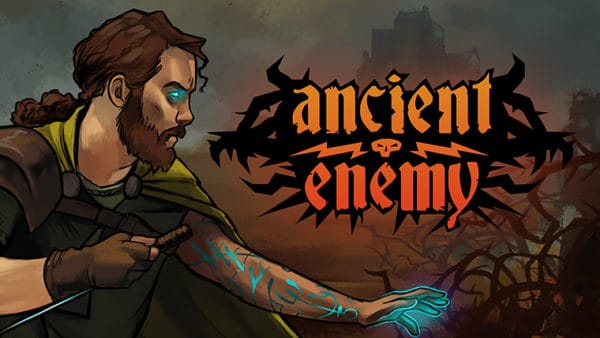 Ancient Enemy starts you off as the nameless Mage. He has awoken from a mystical sleep to find his homeland torn asunder from evil forces. He goes on a quest to vanquish said evil and to try and restore the land to what it once was. The mage does this by battling foes with solitaire, as all fights are eventually settled in this manner.

As a pure Solitaire game, Ancient Enemy is perfectly fine. It uses a 0-9 deck (no face cards), and you can move either up or down the numbers. So, if a 6 is played, you can either place a 5 or a 7, then go from there. Not having face cards takes a bit getting used to, as it does make it simpler. However, that’s not entirely a bad thing. You have the card in action as well as your draw pile.  The round ends when you clear all the cards from the board, you vanquish the enemy you are battling or your draw pile is empty.

You have three primary abilities that you get fairly early on in the game.  First is Shuffle, which takes all the cards on the board and scrambles their values.  This ability is best used for when there are a lot of cards in play, to maximize your chances of getting a playable card.  Second is Change, which lets you target a card on the board that can change into a beneficial card for you.  So, if you have a 3 on the play side, you can change a random card to either become a 2 or a 4 to be played on your 3.

Lastly, there is Eliminate, which you can use to just drop a card from the playfield.  While it might seem this is worse than the change mechanic, it does have its uses. Change is great but you usually have a 50/50 shot of the change extending your combo, or keeping the string along.  With eliminate, you always know what is going to happen.  Later on, you gain way more abilities but these are the basic ones.

There are some other mechanics in the game to keep aware of, some are typical for the genre, some aren’t.  Mechanics that are commonplace are the Undo function (undoing the last card laid down). It even has the cards shake to let you know you missed out on playing a card and keeping the combo going. You have a limited number of undoes, but you can get more with items.  Also, there is the idea that certain cards need to be double-eliminated. Those cards have a banner across them. So you need to get rid of it once, which cuts the banner. Then, you need to match it again, to fully get rid of it. Some gates also need to be unlocked, either by playing a number of certain colored cards or with keys.  There are also wild cards that you can earn.  This is all par for the course of these games.

The Reset is a far more interesting mechanic.  You can restart your hand (from the main menu), which completely restarts the match, like in many of these games. However, the new thing is an in-game Reset. Although, this only occurs during actual fights. When you use it, your combo (if you had one) stops, your ability cards aren’t recharged. But the board instantly fills again with new cards in the original design of the level. You may ask “wait, why is this useful?”  Well, it is actually extremely useful against some of the more powerful enemies you fight. Say there’s an enemy with 40 health, I can usually knock out 20 of its health on the first turn. However, the problem is trying to quickly knock out the other 20 health. By the second turn, most of the cards on the board are probably gone. But, if you use the Reset, all the cards come back and you can continue to pound the enemy again.

In Ancient Enemy, there are two main modes of play, Puzzle, and Battle. Puzzle mode hands just involve you eliminating all the cards on the board.  You’ll have a certain amount of deck cards to go through and once you’ve exhausted them, the round is over. You can use your abilities, wild cards and undo’s in this round but the battle abilities aren’t used at all. This mode is generally a lot less stressful than the battle mode. Well, at least until you only have 2 or 3 cards left to play but there are 5 or more on the table.  This mode is also much more Solitaire-like in nature.

The battle mode is more complex, hence why it has its own section. You and the enemy trade turns back and forth dealing damage to one another. In addition to the regular stuff above, there also instant-cards. They either deal damage or boost your defense, color-coordinated abilities, and inventory.  You also have a limited health pool too. This is because you do not recover health between battles (aside from a few things below), so keeping abreast of your health is a big concern in these battles.

In addition to the spells, you also have three consumables that you carry into battle. Consumables can be used at any time, for either offensive or defensive uses but they have a limited number of overall uses.  Once expended, the card is lost.

I said above that you gain more abilities and these come way more into play during battles than the puzzle stuff. For example, you can get an ability that turns any one card into a wild card for you. There’s also a change the color of card’s ability, remove random cards on the playfield ability, etc.  These are the active-style abilities. There are also passive ones that can add an extra undo, let you start combos earlier, let you see playable cards face up, etc. You gain new abilities sometimes during the game but often you buy them with Power which is the currency you get from battles and completing puzzles.

Finally, as far as battles are concerned is the skill tree. After every chapter completed you gain one skill point to spend in the skill tree. This is a series of interlocking circles that branch out the deeper you go. Skills are permanent upgrades and range from recovering your health, increasing your chance of counterattacking, increasing your combo start, and so on.

As a solitaire game Versus an overall game

The real crux of this review is rating Ancient Enemy as a solitaire game or an overall game.  As a solitaire game, it would rank decently high. I’m not the biggest fan of the card art, but the presentation itself is fine, the card mechanics are decent, and you can definitely play how you want to, especially in battles.  The problem is reviewing it as an overall game.

I think Regency Solitaire really burst onto the scene because of the novelty of it all. It was basically a Jane Austin novel mixed with solitaire but didn’t take itself too seriously. It had really good characters, smart writing, and told a story that got the player invested in it.

However, Shadowhand didn’t do this. It did have a story, but the whimsical nature of the world (which was a prequel to Regency Solitare) was gone, and instead, it was kind of a self-serious story with forgettable characters.

Ancient Enemy goes even further in the Shadowhand direction and suffers greatly for it. I did not get invested into the Mage’s story at all because, honestly, nothing happens. He just narrates to himself, every so often, about how the world is a nightmare and he is a dour asshole about it all.

Think of the movie Waterworld, which oddly has some parallels here. The Mariner, (played by Kevin Costner) starts the movie off not caring about anything except for his ship. But over the course of almost three hours (using the Ulysses Cut), he bonds with Helen and Enola and wants to keep them safe from Deacon (played by Dennis Hopper).

Do you know what Waterworld had? Characters! And An actual story! Also, there’s a villain with a personality or, hell, even presence in the narrative as well. What would Waterworld have been like if it was just three hours of Costner either laying around on his boat or fighting nameless guys on other boats, while occasionally narrating to himself about how lonely he is?

All of the story stuff truly pains me. For one, I’m friends with the main developer. I even beta tested the game during its difficulty-tuning phase and I’m in the credits for the game too. Plus, the writer of it, Jim Rossignol has written some really funny stuff for Rock Paper Shotgun in the past. It’s just incredibly perplexing to me that this game goes even further in the direction of basically not having a story.

Even sadder is that the story almost does its damnedest to not make you care so it drags a lot of the fun out of the at times challenging battles.

Overall, I did enjoy my time with Ancient Enemy. As a pure solitaire game, it doesn’t reinvent the wheel but still offers enough small changes and has just enough difficulty that never borders on frustrating. However, the same cannot be said for the actual story, which almost completely misses the point. Generally, these types of games are supposed to be light and quaint. The story is almost the complete opposite of that and it makes the game a bit of a slog to get through.