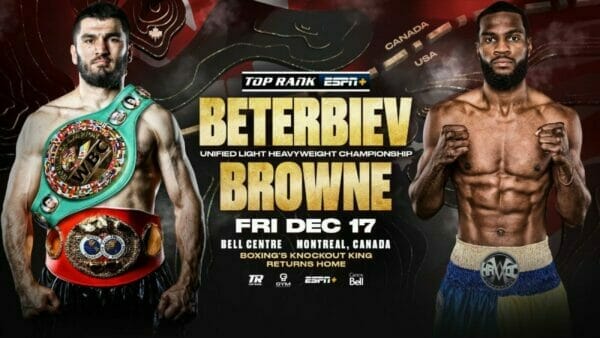 Artur Beterbiev vs Marcus Browne battle for the Unified WBC and IBF Light Heavyweight Championship at the Bell Centre in Montreal, Canada!

Beterbiev (16-0, 16 KOs) last fought in Canada in December 2016, a first-round stoppage over Isidro Ranoni Prieto. He won the vacant IBF world title in his next fight, which he defended three times before unifying titles with a devastating 10th-round stoppage over longtime WBC king Oleksandr Gvozdyk. After a nearly 18-month absence, Beterbiev returned in March with a 10th-round TKO over Adam Deines in Moscow. Browne (24-1, 16 KOs), a 30-year-old native of Staten Island, New York, won an interim world title in January 2019 with a unanimous decision win over two-weight world champion Badou Jack. After dropping a technical decision to Jean Pascal in August 2019, Browne returned to his winning ways April 20 with a shutout decision over Denis Grachev.