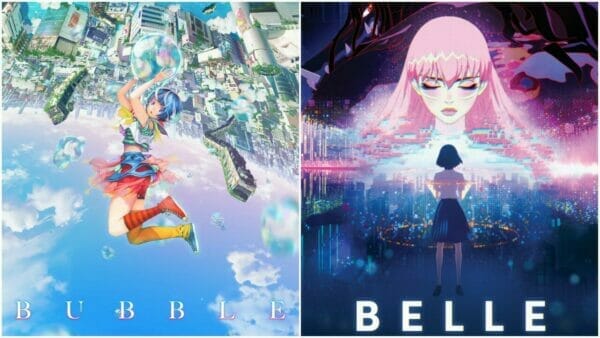 Bubble (Japanese: バブル, Hepburn: Baburu) (2022) is a Japanese post-apocalyptic animated film produced by Wit Studio. It is directed by Tetsurō Araki and written by Gen Urobuchi. It features character designs by Takeshi Obata and music composed by Hiroyuki Sawano. The film had early screenings at the Berlin International Film Festival on February 10, 2022. It was followed by its worldwide release on Netflix on April 28, 2022, before it will be released theatrically in Japan in May. A manga adaptation of the film by Erubo Hijihara debuted in Shōnen Jump+ on April 22, 2022.

Belle (竜とそばかすの姫, Ryū to Sobakasu no Hime, literally “The Dragon and the Freckled Princess”) is a 2021 Japanese animated science fantasy film written and directed by Mamoru Hosoda and produced by Studio Chizu. The story is inspired by the 1756 French fairy tale Beauty and the Beast by Jeanne-Marie Leprince de Beaumont, with Hosoda taking cues from the 1991 Disney animated movie.

Check out more of our Anime reviews.