SMG Studios have done it. After its announcement at PAX East 2016, Death Squared has been anticipated by many Puzzle game players. Finally giving you a new “Portalesque” experience. This game follows a few little cubes that have you use a lot of hand-eye coordination, thinking, and patience. 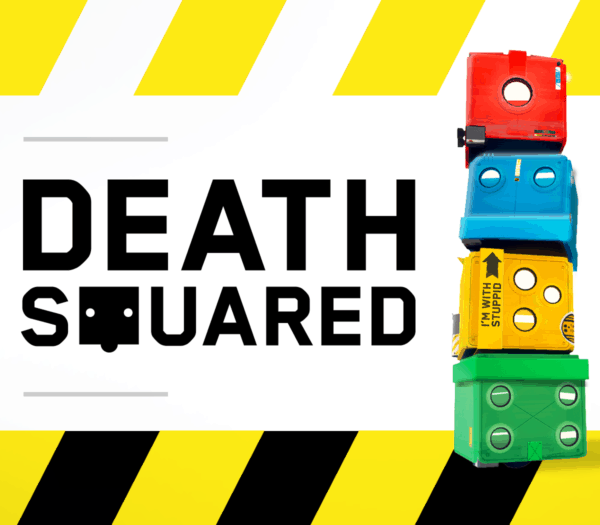 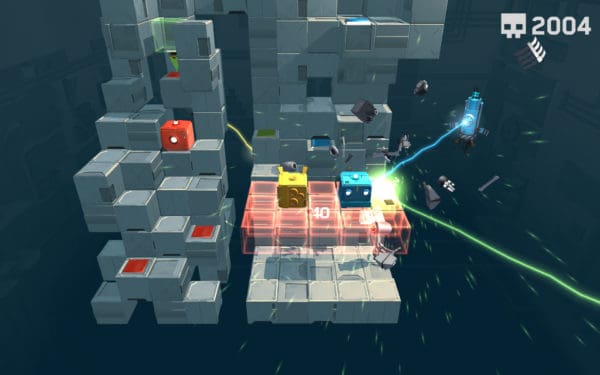 While playing, you’ll get a lot of dialogue similar to GLaDOS from the Portal series. Plus, background talk reminiscent of The Magic Circle. These “chats” between the AI, “Iris”, and the AI Tester Level 1, David Valenzuela, really have nothing to do with the actual gameplay. But they do give background information and lore on your purpose. While also dropping hints on what you are supposed to be doing. Other than the previously mentioned hints, the game just throws you into the fray. Your main objective is to get these sweet little cubes to the circles by any means necessary. 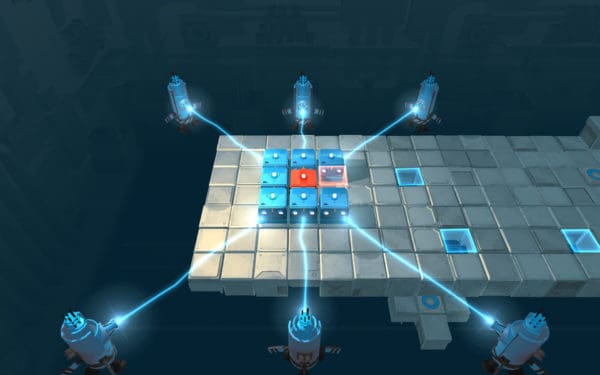 You can either use WASD and Arrow keys, or a gamepad to move about. Mainly, your job is to find a way around, through, and over obstacles. Sometimes, doing that causes even more obstacles to appear. Death Squared plays similarly to an online game many may played in their younger years known as Bloxorz. Well, that’s until you go into multiplayer and it takes a turn towards Gang Beasts. Some obstacles are also blocks that move when one Cube moves, pushing the other cube over the side. While at other times, it can also send the cube flying off the screen. Winning is based on having the least amount of deaths. You know, like golf. 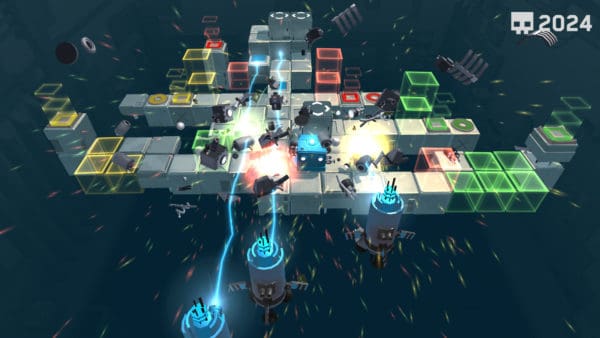 The graphics and level builds have a unique feel. Known as their color Red and Blue, the game allows you to customize your first two cubes with basic and fun designs. The levels themselves are platforms above a void. Each with unique gaps, spikes, lasers, and a few other hidden surprises. The artists went all out, giving it a simple art design, but still holding the complexity of a first generation robotic era. 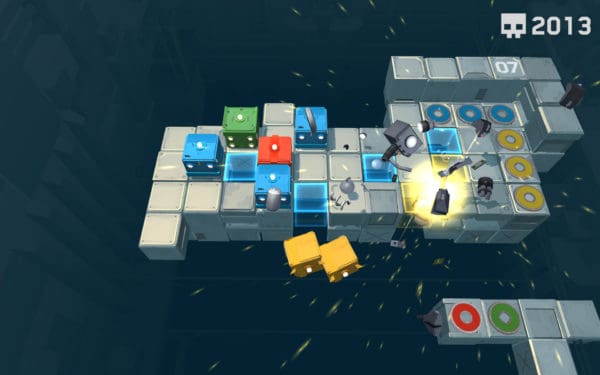 At first, the controls seemed a bit weird. Even though I am a WASD player myself, the use of both hands made things a little more complex. Though this gives great potential for multiplayer, if you have someone to share a keyboard with that is. If you attempt to play as a single player, be very wary of which hands you use, or get a controller. The game uses Permadeath, so one little move and your Cube goes toppling over the side. Thus, starting you right at the beginning. For a while, it was no big deal restarting. However, as you get deeper into the levels, they become more complex, making a restart detrimental to your progress.

I do not have any experience with a controller, being only a PC gamer. Sadly, a controller is required for online multiplayer. Mostly, multiplayer is similar to the main game, just more cubes, obstacles, and raging. While the controls can be a hassle, there’s another major factor to consider: gravity. Though it seems like a silly problem, Newton’s law applies to this game in an amazing and challenging way. Once in motion, your Cube is in motion. So, once you release the key, there is still a bit of sliding that occurs. Similar to a car attempting to come to an immediate halt. This little extra motion can cause disaster on the board, so be careful. Whether you’re too close to the edge, or that Cube’s movement causes a trap to spring, I will admit it’s frustrating to die because of the extra motion. However, having the realism in the game is pretty cool.

It has a high rage rate

Overall Thoughts: 9.5 Out of 10 I enjoyed my time with Death Squared. If you are looking for a fun, yet, challenging multiplayer game, this is one to seek out. Especially if you want to play with a sibling or best friend. It also brings a great challenge for puzzle players with its scoring system. It gives you something to go back and try to beat, making you want to replay the game to get an even better score. I highly recommend this game to any Puzzle game enthusiasts out there.

About The Author: Jacob Buchanan