Canadian development team Cococucumber showcased their title Echo Generation at various Xbox events throughout 2020. Each time a little more was unraveled about the game’s battle system, its voxel graphics, and 1990’s retro charm. The game quickly developed a groundswell of support, making it one of the more anticipated indies out there. After beating Echo Generation there is certainly a lot to like about it such as its adoration for Sci-Fi which permeates the entire adventure. Unfortunately, there are also some major gameplay components that could make it unbearable for those accustomed to more modern accouterments. 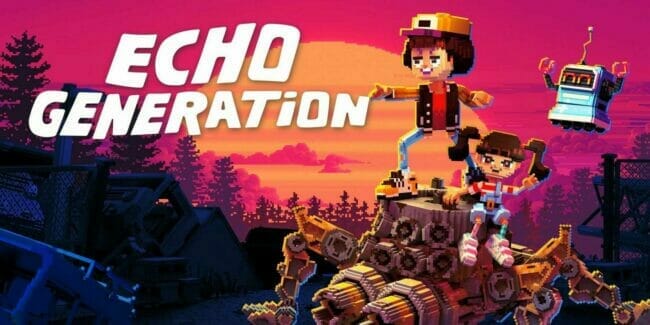 It All Started in a Small Town

Set in the summer of 1993, Echo Generation sees the main character awake from their nightly slumber excited about the alien movie being made with friends. There’s even an early script available inside the Desktop computer for you to read as well. Once you select said character’s appearance and give them a name, you’ll make your first trek out into Maple Town at the behest of your little sister who wants a decorative item for her room. In search of this illustrious traffic cone, it doesn’t take long to figure out that Maple Town is a bit of a weird place. You’d expect to see a raccoon by a trash can, but certainly not a talking one that then does lighting fast cartwheels in battle. Thankfully, the unusual waits until you’re able to pick up your sister to form the core two-person party. However, after that, all bets are off and the strange oddities will appear one right after the other in this extra-terrestrial adventure.

Echo Generation borrows a central conceit from Stranger Things using children to slowly unravel mysteries hidden inside Maple Town, while also having a bigger overarching story surrounding the disappearance of your character’s father. Solving one piece of the puzzle may directly or many times indirectly lead to the discovery of something else happening in a different area of the town. Some events are entirely tied up completely, but then others lead back to the major plot point. Using the main character’s love for Sci-Fi and Horror, there are a plethora of ode’s and influences spread throughout that will surely make fans of these genres smile. Some of them are overt mentions, while others are more secret discoveries. Considering that many of the vehicles used to tell this story become rather cumbersome, having an interesting narrative heavily enticed me to trudge through it.

Exploration is the instrument of detection in Echo Generation. There is this great sense of freedom in how the game pushes you to find everything by just searching. You, your little sister, and a third changeable pet companion are truly on this adventure where the only thing holding you back is how proficient you are at locating hidden objects. Let me be upfront though, the narrative advancement in Echo Generation is much more like a 90’s style point-and-click game than say a Zelda adventure title. So, while you move around freely as you would in a Zelda game, outside of battle, the major gameplay aspect is actually more akin to say a Grim Fandango or Secret of Monkey Island. You see, Echo Generation is fueled by a long string of fetch quests that involve extensive traversal and observation. And much like those aforementioned inspirations, there is no hint system or fast travel system to aid you in completing an objective.

I know this gets thrown around a lot nowadays, but Echo Generation is the perfect Xbox Game Pass game because your tolerance level for copious amounts of head-scratching and backtracking are going to be put the test here. No doubt there will be a moment where you wonder “where in the world is this freaking item” as you’ve searched every conceivable area. And while there are some natural shortcuts you can find, running through the same handful of locales numerous times searching for this “one thing” is probably going to wear thin. Sure, you could easily pull up a guide and alleviate much of the headache, but doing so may also make the other major component of Echo Generation harder to understand as well.

The battle system in Echo Generation follows the flow of a turn-based RPG, but with a twist. Each attack has a gimmick attached to it that determines the amount of damage dealt. For example, the Ground Pound asks that you press A as fast as possible within a time limit to fill up a meter. Hitting the very top lands a critical hit and the highest amount of damage. Not doing so hits about half as hard. However, the gimmick also extends itself to the defensive position as well. Enemies will give you a small window to press a button and lessen the damage of their attacks. If you miss or time it wrong the attack will do its full allotment of damage. This back and forth standoff continues until one of you is defeated.

Special skills are found inside various comic books littered throughout the town. Some are given to you by NPC’s for completing certain objectives, while others are obtained by defeating bosses, purchasing them, or finding them. Each skill requires points to use in battle and these skill points are shared between your party of three. As is the case in almost every RPG, gain enough experience and you’ll level up. However, in Echo Generation, one does not just simply level up. You must also decide in upgrading a character’s health, strength, or add to the skilled share points pile. I used a pretty balanced approach and it mostly worked out for me.

A Little Too Grindy

Every one of Echo Generation‘s key components work together to create this weird scarcity. The limited amount of enemy encounters allows for only a certain number of levels and a certain amount of money to be earned overall. Thus, you have to really think about how you want to upgrade each character. The shared skill points system essentially ensures you’ll never have enough points to get you through most fights. So it always ends up becoming a battle of attrition by the end. Due to there being no way to fully block attacks, every attack will cause you to lose health each turn. So, health items are an absolute necessity and will drain your financial resources. Oh yeah, there are certain items you have to buy to progress the story, and eventually, even regular Were-Rats and Pig Aliens do not respawn either.

There are even times I found myself essentially having to sacrifice one or multiple characters to keep the character that did the most damage alive long enough to win the battle. This is why I mentioned that using a guide to quickly find all of the necessary items is actually detrimental. The battle system is very much working cohesively with the rest of the game to make you have to put thought into every action. I can’t tell you how many times I had to use math to figure out how many hit points I have to nail in one turn to kill this monster or face my party being wiped out and starting from scratch with rebuying items I used in battle. Also, don’t try closing the game if things go south and restarting, Echo Generation‘s autosave system will catch you and you’ll lose any items you used prior to the reset. Thankfully, healing post-battle is done by simply finding the nearest house with an available bed inside of it.

I do think there are some elements to the battle system that are unnecessarily difficult that make it extremely not fun. Some bosses and even regular enemy hitboxes come and go too quickly making it almost impossible to block certain attacks. The difference between being hit by an attack that does 8 damage compared to 14 or 15 can be curtains for a character when everything is so limited. Also, since you have to maximize every turn, experimenting with the different attacks at your disposal is an exercise in frustration. Some of the gimmicks require practice to pull off, but since wasting turns would ultimately lead to certain death, I wound up just using the same handful of attacks for most of the game.

The perfect example of everything I’ve mentioned is the way Echo Generation handles the pet companions. Not only can they not access your inventory, but each one starts at Level 1 regardless of your current level. Forcing you to waste precious battles and resources on them due to the shared skill points system. The only saving grace to this is that miraculously characters still gain experience points even in death, as long as one character survives. So, you could conceivably just let them die and not waste healing items on them. But considering that one of the companions is absolutely vital to pushing the game forward, this is an incredibly annoying aspect of a game I mostly enjoyed.

Perhaps the most enchanting feature of Echo Generation is its graphical style. The Voxel look works for the characters extremely well and backgrounds and settings around them enhance that too. This is especially true of the bosses and enemies each one has a distinct look from the grotesque Sand Worm to an animatronic boxed clown. All though yes, you’ll see them a lot, the number of different areas available was impressive and how much of it there was to explore as well. I had several moments where I didn’t think that going in a certain direction would lead to anything, only to find it also was an area of investigation. Add to it the speed of the Xbox Series systems and exploration feels even more seamless as there are barely any load times at all. It is literally an instant from the end of one area to the beginning of the next.

Another thing that helped ease or perhaps add to the tension is the breadth of the musical score done by PUSHER. You’ll go from hearing relaxing bleeps and bloops as you go around town to a spooky theme when entering the Cemetery and then go inside the school only to hear something even tenser than that. The boss battle themes also have this great variety as well. From the animatronic electronic grunge to a bit of southern country when in another area. Unfortunately, the full soundtrack hasn’t been released yet, but this is certainly one should seek out once it does.

Although I certainly have my qualms, I really did enjoy my time with Echo Generation. The game isn’t short, but it also isn’t overly long either. The narrative is certainly worth it. There’s always something new thrown at you and it is especially a delight for anyone that’s a Sci-Fi fan. No doubt, the game is certainly a throwback, there’s something deeply satisfying about just exploring and finding the item you need where you least expect. However, the battle system has some neat ideas with the gimmicks, but the limitation of resources and other design decisions surrounding it really hold back Echo Generation from being a true standout title.