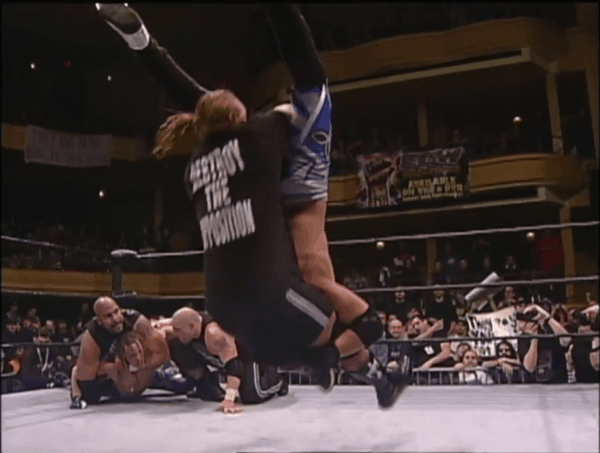 Harry: Um, it was there? Nothing match as a pre-match attack leads to a Cradle Piledriver by Lynn and a quick pin for Cyrus. I’d have been curious to see what happens with York and Matthews had ECW continued but obviously it wasn’t meant to be. I’d say Matthews did okay for himself though. (DUD)

Patrick: What a way to start. Thanks for wasting my time by using your opener to set up your main event, it seems. Baldies… I mean Cyrus win. (DUD)

The Tag Team Titles Are Up For Grabs! 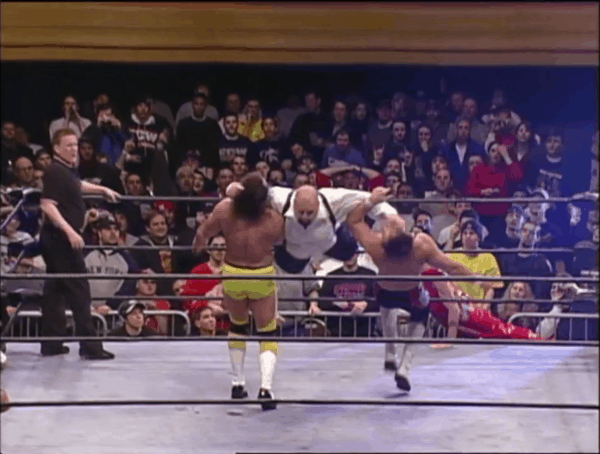 Harry: Call this a little personal bias but I quite enjoyed this one. I thought it was unfortunate that Danny and Roadkill never got the chance to do anything beyond the sporadic appearances in TNA after ECW went out of business because they were one of the best tag teams in wrestling at this point in 2001. EZ Money is another guy who I thought would be a big star in wrestling, but it was never meant to be. Julio was just kind of there though. (***)

Patrick: How the hell is the team of Doring and Roadkill so good? …chickens. The answer is always chickens. While some moments may have whiffed in the match, and Dinero may look like someone you’d spot on “To Catch a Predator”, the match is fast and easy to get through. (**)

Not So Hot Commodity 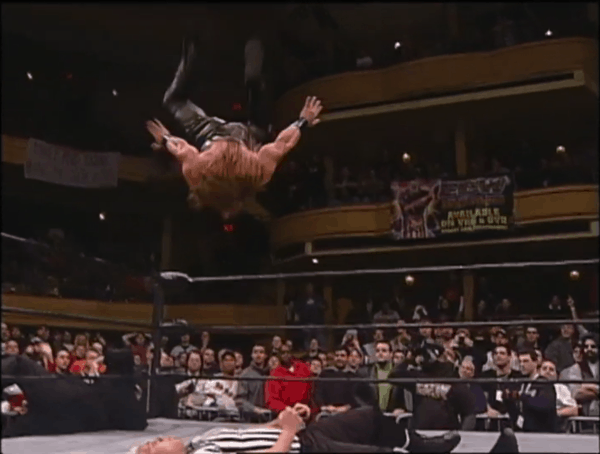 Patrick: It’s too bad Dusty wasn’t working with the company anymore…then this would’ve made sense. Chris Chetti interferes as a ref (he lost a ‘loser leaves ECW’ the month before), then Spike interferes and counts the pinfall. Match is meh overall and kinda just gives me a headache (*)

The Blood Feud Comes To An End! 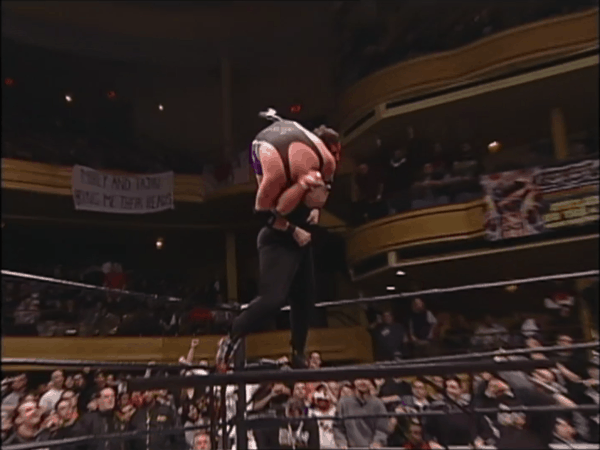 Harry: Star making performance for CW if ECW had continued. Hung toe to toe with the ‘Innovator of Violence’ and even innovated quite a bit of his own during. Dreamer himself even acknowledges as much with the post match show of respect with the handshake. (***½)

Patrick: Tommy…WINS?? A brutal match that features tables, chairs, and razor wire (I think), Anderson is someone that is good in the ring, but does not have the character to be an Anderson. Seriously, though…Tommy wins? (***)

Did Somebody Say Three Way Dance? 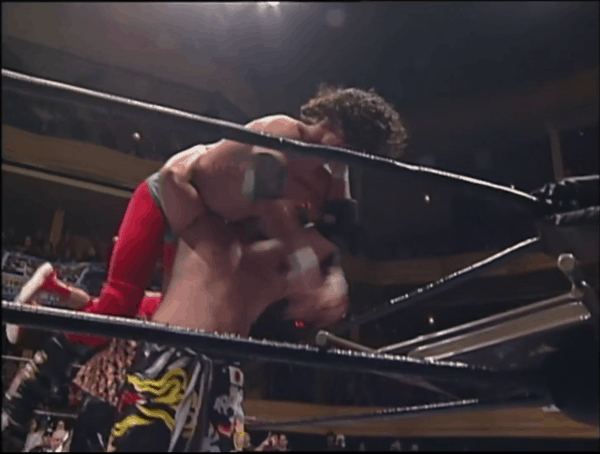 Harry: As much as I like Kid Kash and Super Crazy, I feel their presence in this match was a little unnecessary. That being said, this is a complete show stealer from all six men and during the show I believe I called Mikey and Tajiri the best tag team in wrestling period at this time. I stand by that and I’d say Guido and Tony weren’t far behind. (****)

Patrick: Ladies and gentlemen, Missy Hyatt fucks everyone. Moving on…this feels like a match with too many people in it. Hell, take out half of it, and it’d be awesome (leave Guido, Tajiri, and super crazy), Big Sal feels out of place weighing more than everyone else…combined. At least the right team won in the ‘Unholy Alliance’. (***)

Tables and Ladders and Chairs… and Canes! OH MY! 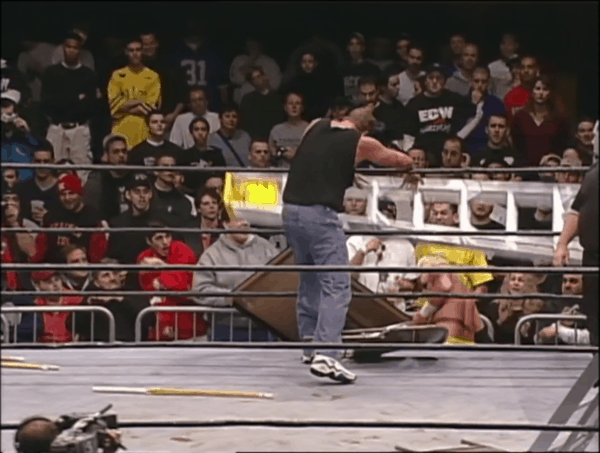 Harry: Oh boy…clusterfuck and a half here. Two of the best pure workers in ECW history involved (Corino and Credible) but this was a disaster from the opening bell. Sandman clearly in an altered state and both Credible and Corino seem off their game and the weapons involved don’t particularly seem to want to comply as well. Sandman winning the belt seems like a nice moment for the company until what happens next. (*)

Patrick: Oooooowwwwww…that’s the best way to describe this. Nothing goes right, it seems. Corino and Credible are dragged down by an obviously drunk Sandman, so obviously Sandman wins. Brutal match, but a nice ending with Sandman winning. Until… (**)

A Page One Move Out of the ECW Playbook. 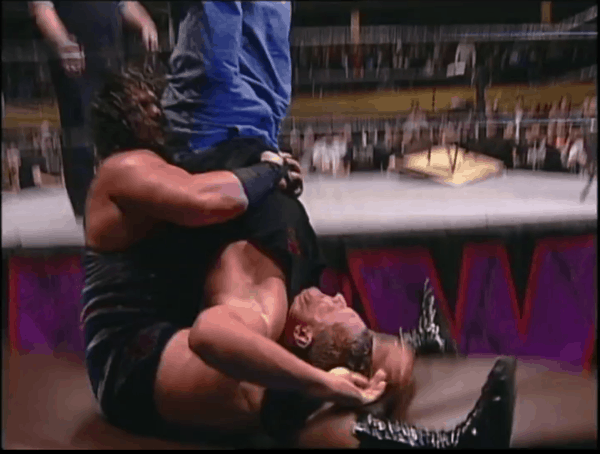 Harry: Well, you can’t say they didn’t try to make Rhino a big deal with this. Rhino first destroys all four members (and a valet) of a tag match earlier in the show that doesn’t deserve a rating and then more or less trucks his way through the multiple time ECW champion in Sandman to win the belt. It was clear what the plan with Rhino was going forward…ECW just ran out of time to get there. (½*) 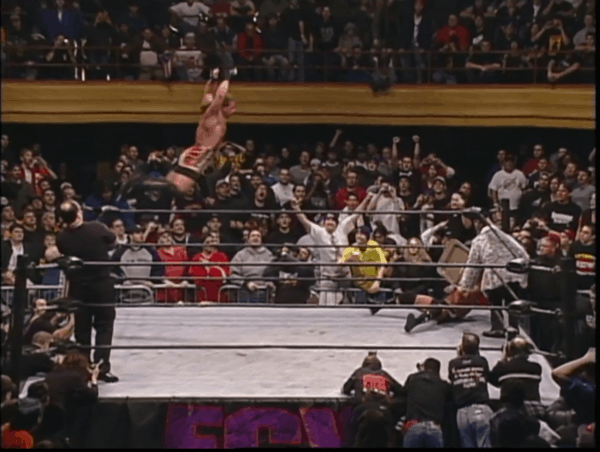 Harry: These two are responsible for one of the greatest matches in ECW history. A match that got a lot of casual fans into the company. This…is not that match. Between Lynn’s new ‘heel superstar’ and Van Dam being the ‘Stalling Machine’ that he turns into from time to time, while the action that we get is good, it’s never consistent enough to mean anything for the overall duration. Frankly, at almost twenty minutes, they would have been better served cutting a few and giving them to one of the under card matches so this is much more cohesive. Consider this a disappointment and a sad letdown for what was, albeit fittingly, the final PPV match in the original ECW’s history. (**)

Patrick: RVD vs. Jerry Lynn. Should be a classic, right? Especially in the main event. Well, not here. Not a bad match and still one of the better matches of the night, but not even in the ballpark of their previous matches. RVD wins to start setting up towards him and Rhino…too bad that never happens. Good, not great. (**½)

For the ‘Big Finish’ to find out what we gave best and worst match, our “Cash and our Trash” and the overall rating for the show as well to hear us go into more detail about the matches you see listed above, be sure you check out Episode 4 of Wrestling Unwrapped: ECW Guilty as Charged 2001 on the W2M Network.

Harry took out Von Eerie vs. Cherry Bomb, Bennett vs. Mondo, Garrett vs. San Antonio and Daivari vs. Dreamer from last review’s Top 25

Patrick took out Tatanka vs. Luger, Made In Syn vs. Yung/Taylor, Veda Scott vs. Kimberly and Mahoney vs. Striker from last review’s Top 25