Last year, the long-awaited remake of one of the most beloved Japanese role-playing games of all time began what seems to be a very long journey. Square-Enix took us through a deep dive of the events in Midgar, with a few added twists and turns to keep returning players on their toes. Finding a new meaning to the term “remake,” the door has been swung wide open to new possibilities and created hundreds of new questions to be answered. Out of all of those new questions, a year later Square-Enix decided to give us Episode Intermission, which gives us an answer to one of the questions no one was asking, what was Yuffie doing while Cloud, Tifa, and the Avalanche gang were blowing up reactors in Midgar? 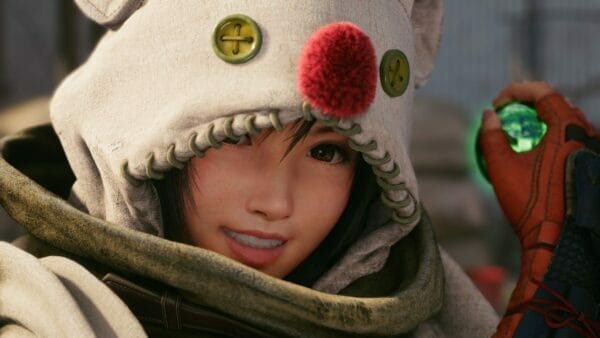 The Playstation 5 version of Final Fantasy VII Remake was announced just a few months ago, showing off the improved graphics and faster load times.  This announcement was expected and surprised no one, the thing that did surprise a lot of people, was the fact that this upgrade would include DLC in the form of Episode Intermission, featuring Yuffie. This unexpected occurrence was stunning on several levels, as Yuffie was not a part of the team during the opening Midgar section in Remake, in fact, Yuffie was an entirely skippable character in the original game. However, much like the first installment to this remake has explained, this is not your daddy’s Final Fantasy VII.

Episode Intermission follows Yuffie as she comes to Midgar looking for the Ultimate Materia. She has been given orders to meet up with a group from Avalanche and infiltrate the Shinra building to find and steal this aforementioned Materia. And although the DLC only includes two chapters, which took me a total of six hours to complete, I found it completely worth the $20 price tag.

The opening section takes place in Sector 7, home of the 7th Heaven bar and the hideout for the Avalanche group led by Barret. After fighting her way through the outskirts of the sector, a section that acts as a tutorial, Yuffie meets up with the group of Avalanche members and goes over the mission.  Sadly, though, most of this team is only used in a scene or two and I really would have liked to get to know them a bit more. At least you are given some time to explore Sector 7 while Yuffie waits for the last member of the team to arrive. Also, this area plays out as a side mission hub as well.  However, unlike the main game, there are far fewer side missions to get involved in, and luckily none of them has you chasing down cats.

Once everyone is ready, Yuffie pairs up with Sonon and they take off for the Shinra building. This is where the meat of the game takes place, and it involves a lot of fighting and very little filler. The core story conceit is that Sonon and Yuffie are attempting to find the ultimate Materia that Shinra is working on in secret. However, their plans are quickly thwarted by Scarlet, the Director of Advanced Weaponry for Shinra. Scarlet decides she wants to use Sonon and Yuffie as guinea pigs for some of the new weapons she’s created. So you spend the rest of the DLC fighting through wave after wave of enemies and boss encounters and eventually working your way back to the Materia that you seek. Don’t expect much nuance or depth here, this is exactly what I just described. Let’s be real, this is merely a DLC tease after all. At least you do get to learn where in the FFVII Remake timeline this episode takes place, but don’t worry I won’t spoil anything on that front.

Tweaks to the Combat

I should mention, there are some tweaks to the combat that take advantage of Yuffie’s fighting style. You are able to throw your shuriken and press triangle to pull yourself towards an enemy to close the gap quickly. The same shuriken can also be used as a magic projectile by pressing square instead of triangle and spamming the enemy with different magic charges. This is an important tool to learn and master as it is crucial in getting the upperhand on some of the tougher bosses. Not to mention, Yuffie and Sonon can also synchronize their attacks to create combo moves. This works great when both have an ATB charge available, creating a simultaneous double dose of massive damage. Sadly, the same cannot be said when using normal attacks. Where instead of swinging their weapons, Sonon and Yuffie start jumping around like explosive sugar rushed bunnies. The visuals of these “attacks” are probably the funniest thing in the entire DLC.

Unfortunately, unlike in the main game where you can control your entire party, you cannot do so with Sonon. Although you can issue him commands. Thankfully, Sonon plays the support character very well, he gives Yuffie potions when needed and even sacrifices himself if Yuffie’s HP hits 0. Ultimately, I liked the original game’s party control a lot more, but the decision that the developers made here is understandable. Unlike in Remake, where they are all main protagonists, Yuffie is the major star here. The entire point is to play the game only as her. Sonon is just an assist character, so putting in the effort to make him on par with Yuffie isn’t really necessary.

A Study of Yuffie

Speaking of the big star, Episode Intermission proves to be a fantastic way to dive further into the Yuffie character. She has that same high energy and dorkiness that she had in the original, but she is far less annoying this time. The upbeat energy Yuffie brings is also matched in the fast paced battles and in the amazing music as well. Overall, the DLC serves a double purpose of getting Remake only players familiar with the kid ninja and gives established fans an actual reason to care about her, which only makes her eventual appearance in the main game all that more special, whenever that actually happens.

Do You Want to Play a Game?

Before ending my review, I wanted to take a little detour to share another highlight of Episode Intermission. Anyone that’s played the original FFVII probably remembers a real-time strategy game called Fort Condor that opens up an entire side quest arc of its own outside of the main story. Well, Episode Intermission features a board game version of Fort Condor where you start out by picking which board you want to use. This also equates to how fast you want your ATB gauge to charge, how many different units you can deploy, and how much HP do you want your three towers to have. After this, focus moves onto the individual units, as each one of them has a different ATB cost and also one of three attack styles as well. The core mechanic of Fort Condor is your classic rock-paper-scissors combat, as shield is strong against sword, sword is strong against range and range is strong against shield. Some units also have added qualities, such as flying, making it tough for ground units to attack them, while others act as a unit dispensing station.

There is a lot more strategy involved in Fort Condor than I was expecting, especially when you unlock some of the harder opponents in the game. Fort Condor is very fast-paced, with each game only lasting about a few minutes thanks to the countdown clock. Whoever has taken out the most towers when the clock reaches its end is declared the winner. Well, unless you take out the middle tower, which results in automatic victory.

Due to its fast nature, the movement on the board also happens at a frenetic pace, making it quite easy to lose track of everything happening at once. Fort Condor never lets you get comfortable, as the multiple paths create a sense of angst that forces you to always keep one eye on your attacking units and another on the opponent trying to take out your towers. As a result, many of the later battles wound up in a sudden-death situation, where the next tower to fall ended the game, raising the mounting tension even further. I really hope this compact version of Fort Condor is just a tease towards a much larger version that is expanded upon in the main game going forward.

If you played Remake, playing Episode Intermission is a must.  Not only is it a fun side story to play through, but it adds even more to the new lore that is being told. Once I was done with my playthrough, I hopped online to watch all of the different theories and discussions being had with the scenes shown at the end of the game. Episode Intermission essentially fills in some of the gaps. Not only in our wait for Part 2, but in the story of Yuffie as well. Once again, no spoilers, but that ending cinematic absolutely blew my mind, and now I’m super excited to see what is yet to come in this Final Fantasy VII Remake story.