I generally enjoy a good Metroidvania game. The combat loop of “Explore a map, kill a boss, find an upgrade, then re-explore the map with said upgrade to find more bosses to kill and upgrades to get.”  It’s a genre that’s been around for 30 years and has made a big resurgence over the past decade or so.  Iconoclasts is another game in the genre made by Joakim Sandberg. Sadly, it didn’t grab my attention quite like others have. 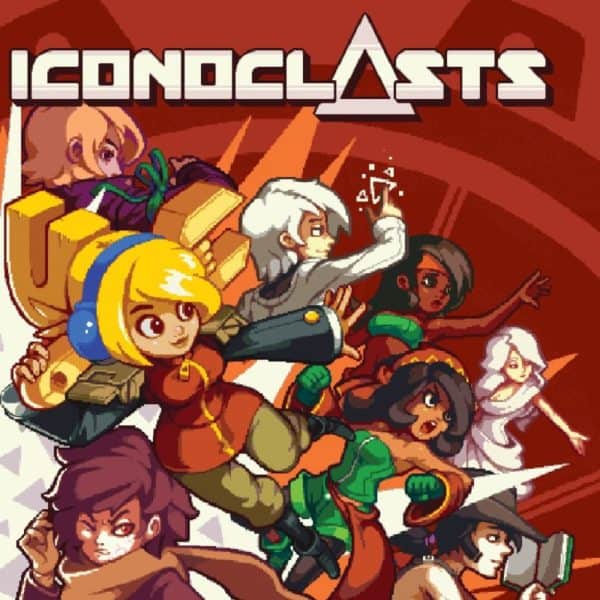 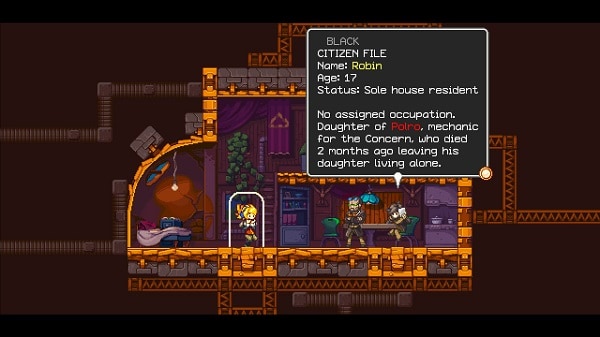 Iconoclasts places you in the role of Robin, whose father was a mechanic.  She has taken up his trade, which is a very bad idea in this world.  Mechanics are looked upon unfavorably due to a religious organization called the One Concern. They have outlawed all unregistered mechanics or the fixing of any mechanical device.  Robin soon runs afoul of them and teams up with various other people on the run from the villainous Agents, as they set about repairing the world.

The story in Iconoclasts is honestly passable, but some of the writing is a tad cumbersome.  There’s some good humor. Particularly when people SHOUT in the dialog, but a lot of the actual dialog sequences break up the flow of the game. Iconoclasts does have more story/dialog than most other platformers or Metroidvanias, but that’s not always a good thing.

Nuts and bolts gameplay of Iconoclasts is interesting but feels a tad half-baked.  You shoot your gun with X, use Y to switch between weapons, A is jump and B is used for melee attacks. You can also do a butt-stomp by jumping and holding down on the D-Pad. The left trigger is used for swapping between players, in certain spots. But this isn’t actually explained to the player, leading to some really annoying boss fights, until you figure this out. 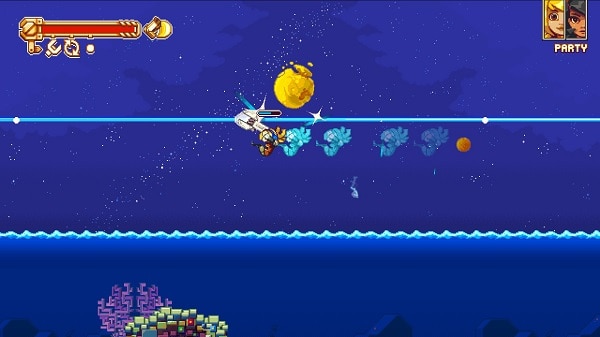 A neat thing about your attacks, both melee and ranged, is that you can charge them for different attacks.  Your main weapon is a stun gun, which has a medium-range rapid fire that is kind of weak.  However, if you charge it for a few seconds, the gun fires an extremely short-range shot, but one that is very powerful.  You can also use the charged shot to get some extra height on your jumps, by aiming down and firing to get a small mid-air boost.

Melee combat is a different beast.  You can swing your wrench for a basic attack. However, it has no real weight behind it.  If you hold the button down, the wrench spins in place for a few seconds, which feels better but is still a tad off.  This will be a reoccurring theme for the game.

Aside from melee combat, you use the wrench for tightening bolts and swinging around the environment.  Tightening bolts works as intended. But the swinging around stuff does not.  You have to really hit a bolt (in mid-air) with momentum or else you will just hang there. This is made worse because Iconoclasts doesn’t have the system like in most games of this type where you can gather momentum by swinging left and right. 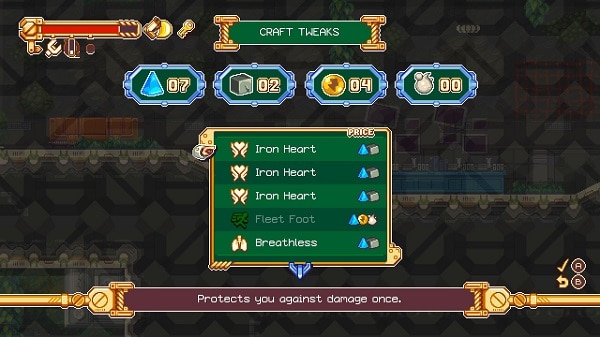 The major mechanic of Iconoclasts are called tweaks.  These are little upgrades you can craft to cater to your game style. Including things like swinging the wrench for longer, holding your breath underwater longer, protecting against damage one time, or increasing movement speed.

Honestly, these things don’t really matter much, aside from the single-use damage guard thing.  The upgrades you get are so minuscule it doesn’t change gameplay at all.  You may craft the “swing wrench more” tweak, and it increases the length by a second or two. However, that’s not exactly game-changing.  You also need to find materials to craft the tweaks, and one of them (out of 4) seems really hard to find at the start of the game.

Not Really a Metroidvania 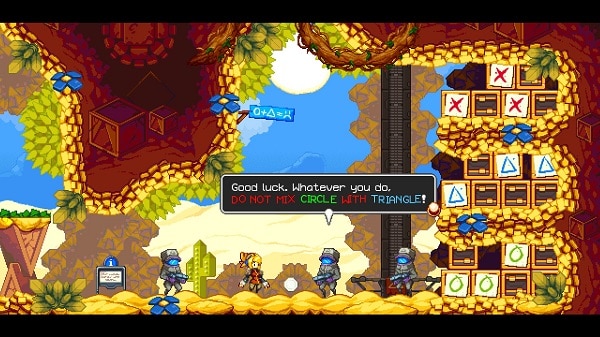 Metroidvania’s often have the “get new gear” part of the genre convention and Iconoclasts barely has it.  To be fair, you do get upgrades to your wrench. Letting you grind on rails, or do electric attacks. While also unlocking new weapons. Although, if you look at Iconoclasts and compare it to say Ori and the Blind Forest, mostly every new skill in Ori allowed you to go back and uncover a ton of hidden stuff you missed going through a map the first time.  When you unlock a new weapon in this game, it’s more in service of you using it to get through the next area. On the plus side, there’s very little in the way of backtracking, aside from a few optional bosses. 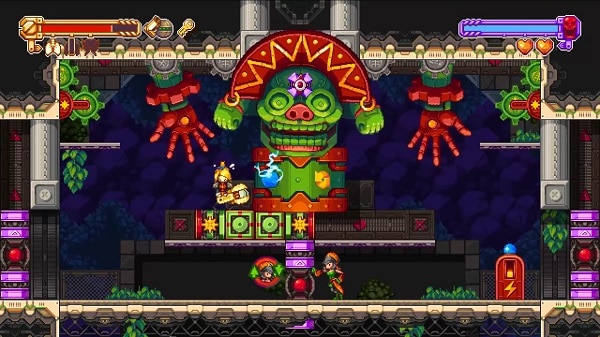 I know I said it before, but something about the game feels “off.”  Here’s an example: to pick up a box, you have to stand on it and press up.  In every other game, you would stand on it and press down (because you are on top of it) to pick it up, but not here.  Also, when you have a box, you can’t just set it down, or at least I didn’t figure out a way to.  You have to throw it, which makes lining up for specific jumps to be kind of annoying.

Iconoclasts does a really poor job of explaining some of its other mechanics as well. This can get annoying. In particular, one boss fight really ticked me off.  You and another character named Mina are separated, while you are trying to fight off a corrupted robot.  Thus presenting a few core problems:

To Iconoclasts credit, it does have a good level of charm to it.  The look of the game is fairly neat and the music is really solid.  I kind of just wish the gameplay had held up its end of the bargain.

Overall Score: 6.0 Out of 10.   I really wanted to like Iconoclasts more. However, the game just did not gel with me. As a Metroidvania game, it falls almost completely flat due to there not being a ton of upgrades or customizable options.  As a platformer, it’s passable, but a tad sloppy.  The story and characters are kind of interesting. Although, not enough for me to really get invested in the game.

This game was reviewed using a digital code provided by the developer Joakim Sandberg.