When I was asked to review Journey to the Savage Planet, I knew almost nothing about it. Other than that it plays best in co-op and it might keep me from playing anymore Resident Evil 6 with my friend online. However, as we played it, I found myself really enjoying it, and it would be an easy recommendation, if not for a few small missteps that turn it from an excellent game to merely a good one.

Review: Journey to the Savage Planet 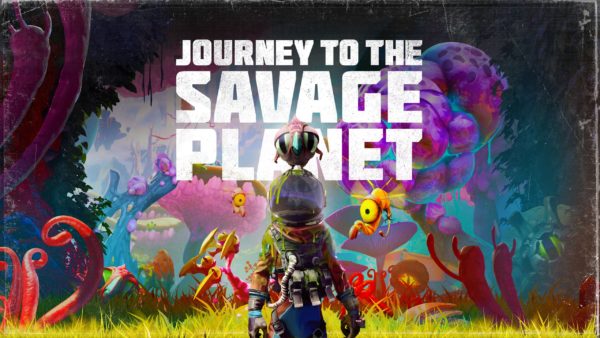 Title: Journey to the Savage Planet

What is So Savage

Journey to the Savage Planet is basically a first-person Metroidvania game.  You’ll enter a new area and find a ton of blocked off passages that require specific items/abilities to get through. Eventually, you’ll find a boss or a key item that unlocks even newer areas too. Then, you can go back and mop up the areas you couldn’t get to previously.

Obviously, this isn’t really new, but it is still a highly uncommon genre for 3D. Honestly, I can really only think of a few 3D Metroidvania games, especially ones from the first-person perspective. With some recent examples being Metroid Prime, Prey, and Alien: Isolation. Journey to the Savage Planet is more akin to the latter two examples, as it focuses much more on exploration, specifically vertical exploration, and less on combat.

The basic premise of Journey to the Savage Planet is that you are an employee of The 4th Best Exploration Company, Kindred Aerospace. You land on a planet that needs to get surveyed for potential colonization and exploitation. So your job is to catalog all the various flora and fauna on the planet and report back.  Oh, also, you might check out an occasional alien artifact or two, on a supposedly uninhabited planet.

Savage Planet really excels in the exploration part of its design. Aside from the dozens of different plants available for you to catalog, ARY-26, the planet you’re on is teaming full of strange life, some hostile and some not.  It’s very akin to No Man’s Sky. Except that you only explore one planet and there are actual objectives in the game too.

Starting out, a gun and a scanning visor are your basic tools.  The gun is obvious, you can shoot the plants/animals if you want.  You’ll soon come to an impassable obstacle, wherein your robot companion tells you to come back to the ship (either teleport or walk) and you’ll be given an upgrade to get around it.  You may have to gather the required materials for it (carbon, silicon or aluminum) to 3D Print it, but that’s about it.

Scanning is VERY much like Metroid Prime.  You can use your visor to scan different animals, plants, even walls, switches, and other mysterious items.  When you enter scan mode, the entire game takes a wireframe green look, except for new things to scan (yellow), or things you have currently scanned (orange).  It helps immensely that the game differentiates what needs to be scanned, and what doesn’t.

Unfortunately, combat is not the best.  You only ever have the pistol weapon, which is about as effective as a pea-shooter.  You do unlock upgrades to add in a charge shot (with a really bad mini-game), as well as damage boosts/speedier reloads, but it never actually feels good or impactful.  Most enemies, at least the bigger ones, tend to have yellow/orange weak points which are very obvious. So that’s helpful at least.

I wouldn’t say the combat is bad, it just doesn’t feel good.  Shots ping off enemies like they don’t even feel them.  Even when you do hit enemies, they don’t recoil or notice.  It gives off the impression that combat is an afterthought, instead of something that actually matters.

Killing enemies or shooting at certain rocks, gets you the materials you need to 3D print more stuff.  Upgrades generally fall into a few categories: combat, locomotion, visor, or inventory.  Combat upgrades make the piddly gun a trifle less piddly.  Locomotion upgrades unlock double (and triple) jumps, as well as high jumps. Visor upgrades dot the landscape for hidden collectibles. While also improving the scanning radius.  Finally, inventory upgrades let you carry more things, and lets you collect certain plants to act as grenades.  Not every upgrade falls into these exact tiers, but its close enough.

Unlike Portal or Talos Project, there are not many puzzles available, at least on the surface.  Most of the puzzles are about actually getting to a location, rather than flipping switches or doing something else.  Trying to figure out how to get an alien metal sample, which is seemingly inside of a mountain, IS the puzzle.  It’s all about trying to figure out how to actually get to it, or finding the secret entrance inside it.

There are also some traditional puzzles in the game as well. For example, alien chests that require three keys to unlock. so you’ll have to hunt for the keys and then use them. Another puzzle may involve unlocking one chest using the grapple beam to move huge walnuts into specific holes. There’s even a jumping puzzle that required me to keep vertically jumping between moving platforms in order to reach an alien device. While the puzzles aren’t finely-tuned masterpieces like in The Witness, quite frankly, they are at least much more fun.

I Believe I Can Fly

Verticality is a HUGE thing in Savage Planet. So, if you come upon a dead end, if you look up, you’ll almost always see the solution or at least some unexplored path that you may have missed.

There are three different areas of the planet. The first is the ground level. The second is in the clouds, and the third is seemingly above the clouds.  This does equate, somewhat, to your jumping distance, as the more jumps you get, the more you can really explore.

Also, jumping around just feels solid.  You have a fair amount of air control, and there is some precise jumping in spots as well. I had a ton of fun just platforming around the various levels.

You have two things equipped at all times: your gun (in your right hand) and consumables in your left.  These range from animal bait, plants that cause springs, different types of grenades, and so on.  This is where some of the other puzzle solutions come into play, such as getting to higher points of interest and stuff like that.

Aside from the main mission, which is to catalog stuff/repair your ship. You’ll also have around two dozen or so sidequests to complete if you so choose.  Most of these involve getting all the collectibles or finding secret stuff.  There are a series of side missions called Scientific Experiments which are kind of annoying though.

Scientific Experiments force you to complete tasks under certain conditions. For example, killing four enemies with electricity or killing five enemies after being launched from the ground.  Some of these missions are HIGHLY specific and annoying. So you’ll probably need a guide to do them.  You also pretty much have to do them, since they gate a lot of the later upgrades behind these quests.

One particular highlight of the game though is its humor.  There are about five or six live-action FMV sequences where the owner of the company talks about your progress.  These are all played for laughs, in a dark humor sort of way.  There are also other humor filled things such as various commercials for future products, narration by the AI, and computer writing.  The writing and videos alone are almost worth the price.

Another good benefit to Journey to the Savage Planet is the co-op. It can certainly make some boss fights extremely trivial and easy.  Plus, if you go down and get resurrected by your partner, you get restored at full health, which is handy.

The biggest help is that you and your partner can really play independently from one another if you so choose.  You’ll have to be on the same planetary level, but aside from that, you can either work together toward a common goal or go your own separate ways.  You can even kill each other as well.

Sadly, there are a few small issues with the game.  The biggest issue is the aforementioned combat obviously. However, an almost equally big one is the lack of a map.  You do have this sensor-pulse thing that highlights objects on your HUD, but having just a map would help immensely.

Also, my friend and I had a few things glitch out on his.  Whenever you die, your resources get left behind, so you can pick them back up in a box.  Occasionally, the box wouldn’t spawn right, or wouldn’t appear correctly.  Usually, traveling to a different area would fix this.

A larger issue is that my co-op partner got stuck in the game at least four or five times.  He could turn his character, but that was it.  This typically happened on rocky hillsides or cliffs and I would have to bail him out with either bombs or spawning a jump pad under him.  This would do the trick and get him unstuck, but it became an annoying issue for him.

Lastly, and this is one is completely a personal issue. Playing the game with someone who did not enjoy the game as much as I do is a huge drag. I played the entire game co-op with someone who unbearably complained about how much he disliked it.  While Savage Planet isn’t perfect, I actually did enjoy my time with it and do plan on going back into it and mop up what I can.

Thankfully, this will be without him who exclaimed “FINALLY, I can uninstall the game!” after we beat it, and saw the credits.  I won’t miss that in my ear.

While it’s certainly not perfect, Journey to the Savage Planet is a delightful game.  There is a lot of neat places to explore and find secrets within.  Combat isn’t great, but is still perfectly serviceable.  Co-op is also good, assuming you have a willing partner, and you aren’t tied to each other, which is the best part.