Just Cause 4 is a game of asking one question: Why? Why did they do this? Why did they introduce these new gameplay systems? Why did the game come out in this state? I have yet to come up with an answer to any of these questions while playing the game. 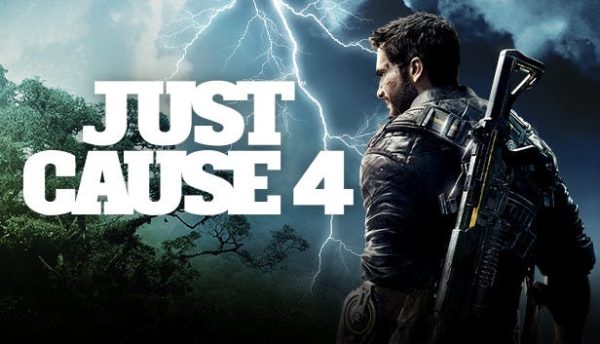 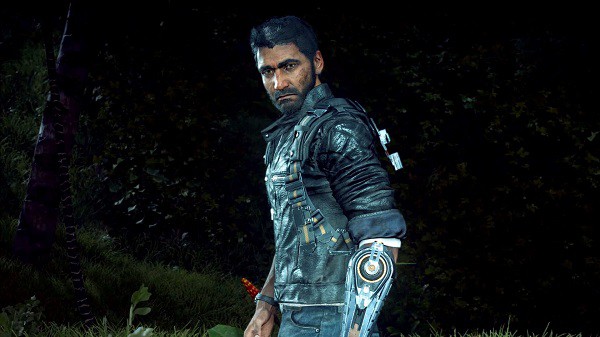 The actual gunplay of Just Cause 4 is good. Rico is able to take a lot more damage than in earlier games. Also, there isn’t the screwy dual-wielding system to worry about. Plus, the core shooting is just better. That’s all well and good because almost everything else about the game is a regression from Just Cause 2 and Just Cause 3.

From a story perspective, Just Cause 4 is entirely boilerplate. Yet another nation is being held by a dictator, only this one has a weather machine and Rico’s dad might be involved this time. Also, Rico isn’t a member of The Agency anymore, so in some ways, he is sourcing more of his gear from regular folk. Although in practice, it amounts to more of the same. Only this time, there is almost zero humor in the game and sadly there is no David Tennant doing increasingly crazed radio announcements.

What Just Cause Was 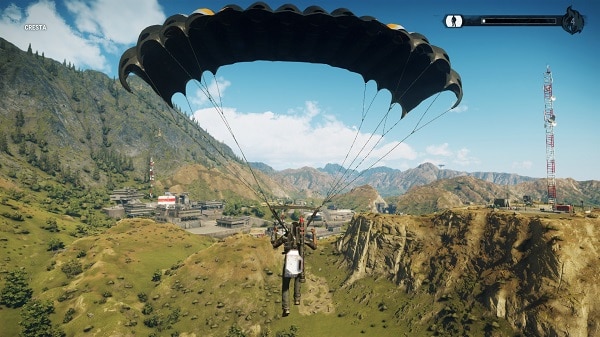 Just Cause was formerly a sandbox game mixed with a destruction engine. In Just Cause 2 and Just Cause 3 you went around towns and bases, destroying army supplies or propaganda with the goal of taking them over. Almost every town or base had things for you to blow up, which became overwhelming in spots. You would go to every town and have a list of crap to blow up. All while guys are shooting at you. Just Cause 3 somewhat helped by at least giving you a map where destroyable stuff was, which was really useful.

What Just Cause 4 Is 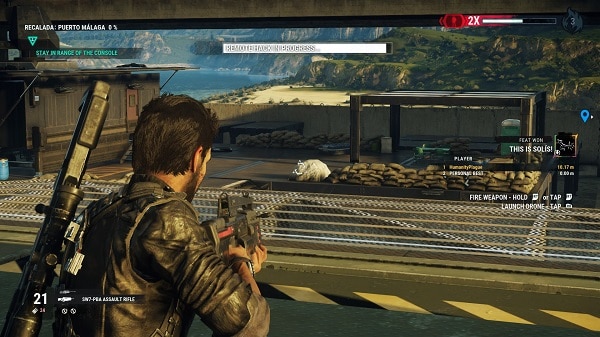 Just Cause 4 eschews this very simple mechanic. You can still destroy bases full of gas tanks or radar dishes. However, it barely nets you anything. The stuff eventually respawns and there is no actual sense of completion if you do destroy everything in a base. Towns also have nothing for you to really do.

Instead, you are given three gameplay tracks and told to complete them:

1. A Hollywood director wants you to do stunt/speed challenges, going through wingsuit rings quickly, or hitting a speed through a ring in a car at a certain speed, etc.

2. Rico helps out a fledgling rebellion. These are the most traditional side missions since they usually involve you killing a bunch of people or blowing up some stuff.

3. Lastly, there are tombs you have to uncover. These basically boil down to you guiding a large ball down the path to a pressure plate to unlock the tomb. They play out in a pretty boring and misguided way. Trying their best Tomb Raider impression and failing. 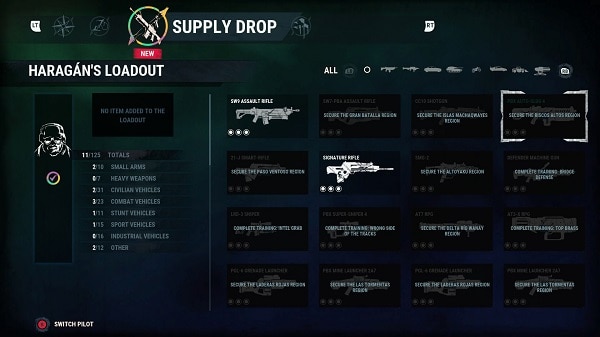 Completing these activities does two things: Firstly, it gives you more Chaos points, which unlock more rebel squads to take over more of the country sections. Thus netting you better rewards, such as better weapon or vehicle drop-offs. Secondly, each school has a different grappling hook item associated with them, and doing more of their missions unlocks more mods for your hook.

My beautiful Grappling Hook, what did they do to you? 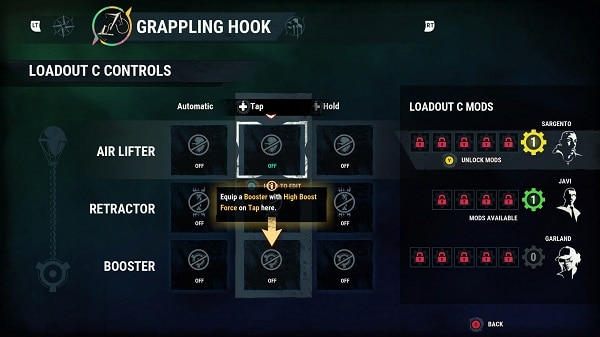 For locomotion, the grappling hook is exactly the same as in Just Cause 2 and Just Cause 3. You can scale mountains, swing on the ground to gain momentum, use your parachute and wingsuit to get around etc.

What Avalanche Studios changed in Just Cause 4 is the tether system. Instead of the basic “attach two items together” system from JC2 and 3, they added this kooky mod system, the point of which still eludes me after 20+ hours into the game.

There are three basic mods for the grappling hook. Traditional tethers, which seem primarily associated with the tomb mission/guy, since you have to use them to guide a big, stupid, rolling rock around the environment. Next, are rockets, where You use the grappling hook to attach rocket boosters to items/enemies. This is in-line with the Hollywood director wanting spectacle. Finally, there is the Fulton tether. This causes a balloon to carry an object up into the air, with additional balloons enabling you to raise heavier stuff. The rebel guy is associated with this mod.

In addition to the actual mod systems, you can specify how strong you want the mods to be, and when you want them to activate. But it’s all really pointless. They also removed grenades for this grapple hook mod system, which isn’t good.

To be fair, there are some pretty cool weapons in Just Cause 4. Each weapon has an alternate fire, usually a grenade or missile launcher. One pretty fun weapon has the standard fire of a machine gun but can be transitioned into a stationary turret with better aim.

The downside of the guns is the ammo situation. You BURN through ammo way too much, and I’m not sure why. Most guns only have a max ammo of like 200 or so, if that, which is too low. I can understand a sniper rifle only having 20 or 30 shots. However, when an assault rifle only has 150 shots, it gets annoying. A lot of the time, I would pick up a rocket launcher or grenade launcher because it was the only weapon around. Heck, I even ran out of ammo in the intro mission, if that tells you how
bad it is. 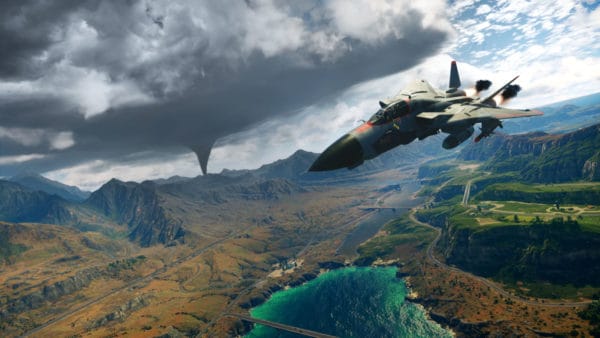 As a showpiece, the biggest thing added to Just Cause 4 is the weather system. Occasionally tornados, sandstorms, or thunderstorms can sprout up. But they are more nuisances rather than hardcore gameplay systems. These natural disasters may look visually impressive, but most of the time they are just a hassle to deal with and the quicker they can resolve themselves, the better.

I really can’t overstate how profoundly misguided Just Cause 4 is, from a design perspective. It reminds me a lot of Red Faction Guerilla and Red Faction Armageddon. In Red Faction Guerilla you are given a hammer and let loose to destroy as much crap as you can with it, along with other weapons in a big open world. Armageddon, by contrast, is a fairly tight corridor shooter where you are supposed to repair walkways and such to proceed, amid just fighting endless amounts of bugs. It’s almost as if no one who worked on Armageddon thought to play Guerilla because of how different (and bad) it is.

Just Cause 4 follows this same path, almost directly. It truly feels like no one who worked on the game actually played Just Cause 2 or Just Cause 3 to discover what made them fun. I’m not going to say either of those games were perfect, because they were not. There WERE a lot of settlements for you to liberate. Not to mention, finding the last generator in a massive base to destroy, which could be a real headache. But they were at least something to do. Those games also included a ton of dumb side content as well as races, challenges, finding collectibles and so on. It doesn’t make sense why they built this (mostly) beautiful world for Just Cause 4 and barely filled it with the blandest content imaginable.

A beautiful game, When You Can See It

I played this game on PC and discovered some oddities. One notably weird
one concerns hair. There’s a character named Tom Sheldon, who was also in the prior games. When he shows up in JC4, I legit thought my graphics driver had crashed or was out of date (it was neither, actually). His beard was not textured correctly on his face and looked half finished. I took screenshots (as you can see below) that show this odd effect. 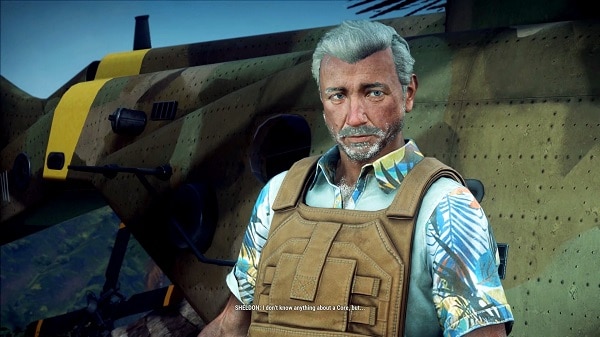 There are also some other peculiar graphical issues going on as well. The game doesn’t look “bad”, but I think Just Cause 3 is a better-looking game than this one and that’s strange.

By far the biggest issue though is with gamma/brightness. There is no menu for adjusting either in the game and it’s terrible. Here’s a shot of Rico inside a tomb: 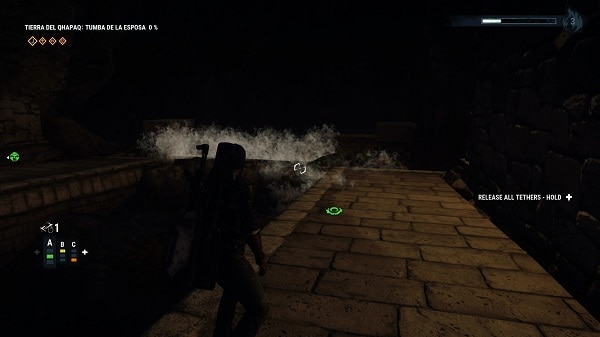 Uh, how are you supposed to see anything that is happening? You can barely see three feet in front of you in certain locations in the game, or at night time. I’m not the only one who noticed this as there are a lot of threads on Steam discussing this very issue.

Gunplay is good with inventive weaponry

Things do explode nicely in the game

A profound misunderstanding of Just Cause
which breaks progression

No sense of humor or fun in the game

Grapple mods add nothing to the experience of
playing

Overall Score: 4.0 out of 10 I would honestly play through the first Just Cause again, which is a fairly gnarly game by today’s standards, over Just Cause 4. The game is simply not fun. Even if the core shooting and grapple stuff are good. There is just nothing for you to actually do that isn’t mind-numbing. The game has no creative spark at all. If they do make a Just Cause 5 I can only hope the franchise can become fun again.

This game was reviewed using a retail copy purchased by W2Mnet.com.