Kingdom Come: Deliverance is the first project from Czech developer Warhorse Studios. An extremely bold project to announce themselves with. Made up of former 2K, Codemasters staff, Warhorse made a huge game set in 13th century Bohemia. The team prides itself on providing both historical accuracy and in-depth gameplay. Something that actually winds up working quite well together. 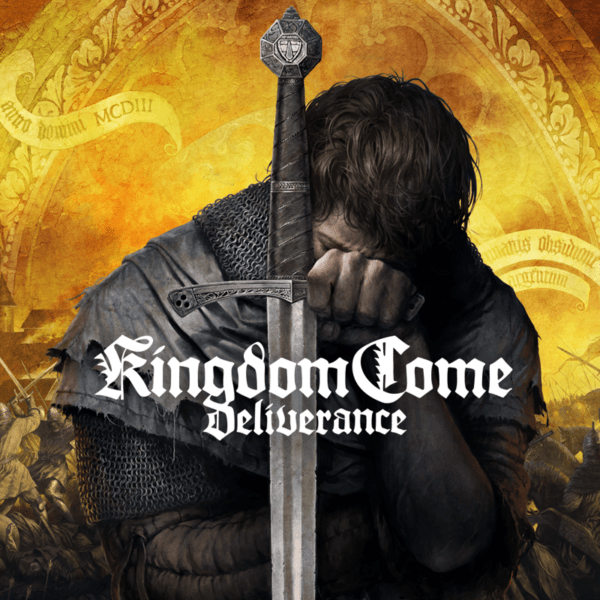 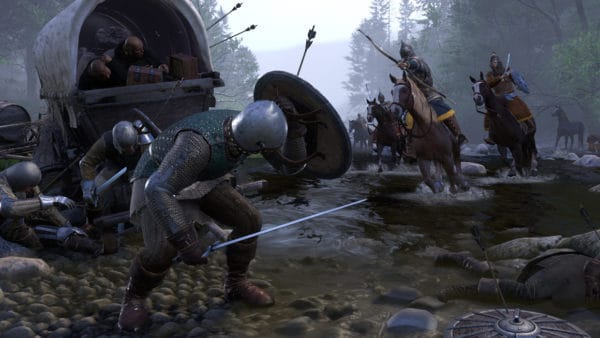 Kingdom Come: Deliverance begins with Henry, the son of a Blacksmith, fleeing his home and avenging the dead he leaves behind, after a brutal attack by Cuman and Czech soldiers. Preparing you for a grand first-person adventure. Upon first impression, Kingdom Come makes you feel like you’re playing Elder Scrolls V: Skyrim. Albeit without dragons. However, you’d better get that out of your system quickly. There is no room here for running into battles, leveling up with magic potions, or shouting dragons from the sky.

Instead, Deliverance plays much more like a simulation. Players have to make sure they eat. Regulate their stamina and sleeping pattern. And, most importantly, learn the skills that will help them survive the harsh reality of the besieged countryside. 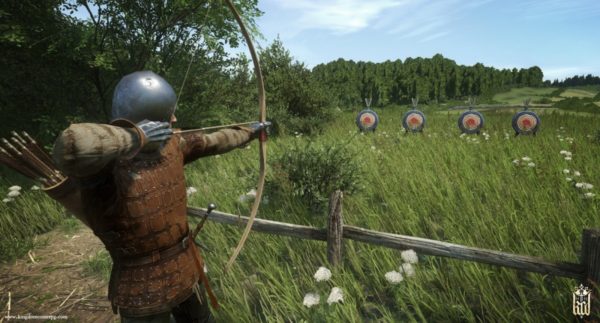 Not helping matters, is that you’re given very little in the way of a tutorial. A few things do pop up on the screen to offer help. There’s also an accessible codex which makes things a little bit easier to understand. But, in the early stages of the game, when you’re frantically searching for something to eat and somewhere to rest as your character is slowly losing the ability to see clearly, you’ll be left wishing for a little bit more handholding than you’re offered.

If players don’t take the first 10 hours getting used to how this game works, it’s going to be difficult to know if the game’s too hard, or you just aren’t good enough. Although, If spending that long learning a game sounds like a misery, this may not be the game for you. 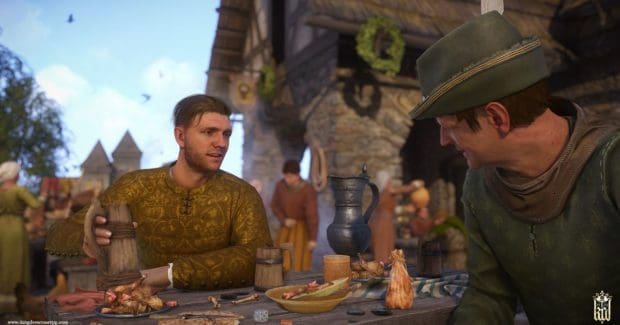 There are many simple things, which wind-up actually being complex. Even something as straightforward as trading can leave you wishing for an autosave system that doesn’t exist. Especially, since giving out a lowball offer can turn the trader against you quicker than an arrow to the knee. Likewise, being in the wrong parts of a castle or town can offer much the same fate. Stray into living quarters you shouldn’t walk into and you’ll quickly be informed your actions aren’t appreciated. 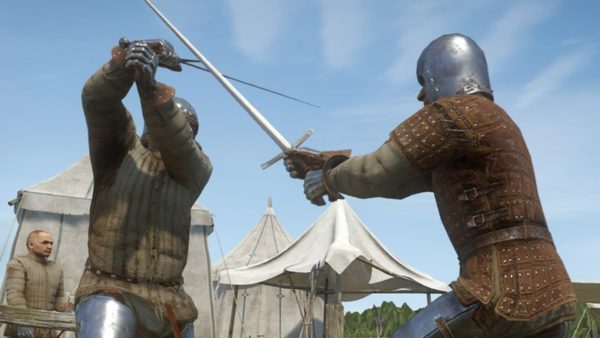 Once you have the lay of the land and know where your bed and nearest meal should be, you can focus on traveling and combat. The combat is probably the hardest thing in the game to grasp. You may die quite a few times trying to figure it out. Alas, don’t worry. Practice makes perfect, and in the case of this game, you also level-up while doing so.

The sword fighting works similarly to For Honor, where you have to look at the stance and angles of your opponents strikes before throwing your own. It gives a nice sense of gravity to one-on-one encounters. However, it doesn’t work as well when implemented into a situation with more than one enemy. Even with practice, beating more than two enemies at a time feels like much more luck than skill. Reminding even the best players that this is no hack ‘n’ slash title. 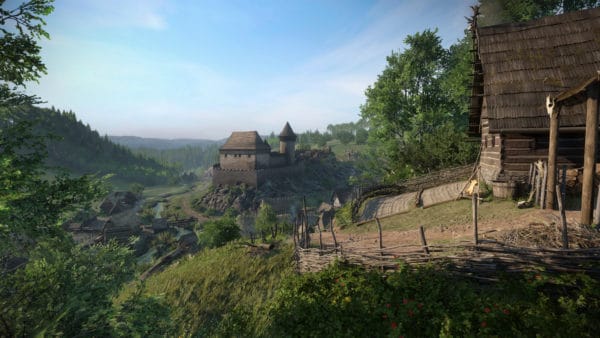 With any good open world, you need a mode of transport. In Bohemia, you get around on horseback. Thankfully, for the most part, horse riding works well and controls as it should. There are slight delays in turning, but it’s not much to bother about. I did encounter issues when mounting a horse while it was still in a stable. Where a glitch would transport me into the ceiling. Aside from that though, it’s actually quite satisfying to get around on horseback. Allowing you to see and experience the game world and your surroundings. 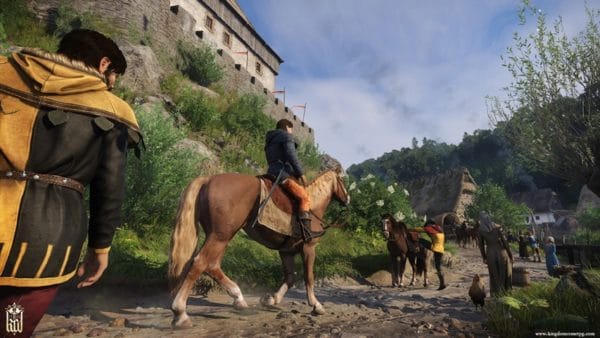 There’s also a fast travel system, which allows you to quickly get between unlocked locations. This is utilized through an absolutely beautiful map, which is designed like a huge tapestry. It’s an absolutely glorious thing to look at. Honestly, I can’t think of a game with a nicer looking map interface. Sadly, using the fast travel system does prevent you from experiencing Bohemia in all of its glory. While the world doesn’t feel quite as vibrantly “alive” as games like Skyrim or The Witcher 3. There are still plenty of fun moments to be had just by exploring. 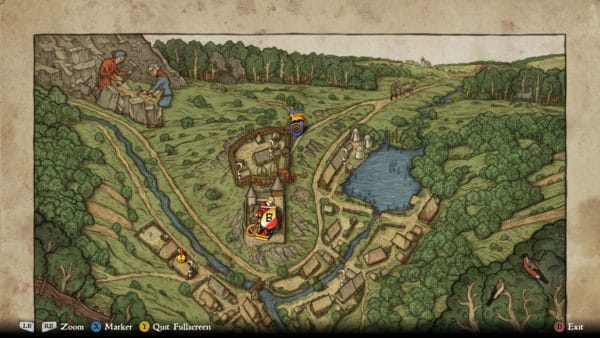 For example, I’ve encountered a bandit lying about his standing in society. As well as, a rather cowardly knight. However, unlike other games, everything in Kingdom Come: Deliverance serves a purpose and has a place. Making them much more than an NPC you can quickly hack down for some easy loot.

Not Everything is as it Seems 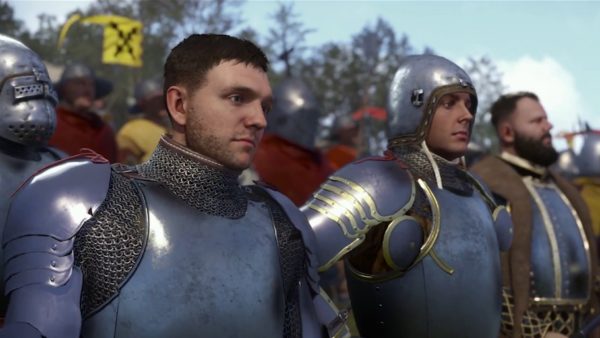 Now, it’s not to say that everything is a heavily detailed medieval dream. With a low budget and small team behind it, Kingdom Come is slightly rough around the edges. There aren’t huge issues graphically, in fact, most of the time the game looks quite pretty. Some of the character models are a little ugly, but they aren’t game-breaking by any means. Unfortunately, there are a few bugs, which can be annoying.

I mentioned above an issue with getting on a horse in a stable, which took around four reloads to sort itself out. There are issues with clipping as well. NPC’s all have “Lydia syndrome” where they stand in a doorway asking you “why are you bumping into me,” rather than just move. Another big issue is the save system. 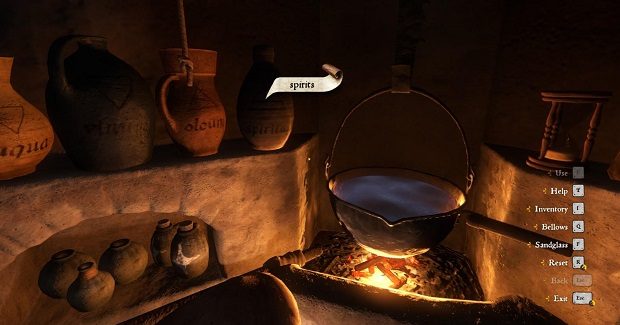 Aside from sleeping in a bed or hitting a story checkpoint, you have to partake of a particular drink to save the game. Even more annoying, is that it can only be bought from vendors at a very high price. Not to mention, it’s an alcoholic drink so you can not only become addicted to it, but it’ll also get you drunk. So, you can imagine how frustrating this can be. Especially considering how unforgiving the game can be at times. A “save and exit” patch has been announced at the time of writing, so we’ll wait and see what happens with that.

The game captures the era with a tremendous eye for detail

Combat is difficult to master, but very satisfying once you figure it out

The game’s steep learning curve may turn off players

There’s very little help at the outset of the game

Some glitches and bugs can cause issues

The save system is counterproductive and takes away from the experience

Overall Score: 7.0 Out of 10 Kingdom Come: Deliverance is an extremely bold title. Although it has some flaws and a rather steep learning curve. If you’re able to persevere and stick with it, it’s a well written and extremely satisfying adventure.

This game was reviewed using a digital code provided by the publisher Koch Media.