I’ll be the first to admit that I’ve had no experience with Mr. Driller before. While the franchise has been around since at least the original PlayStation era, I’ve never encountered it. However, I know There are plenty of people who enjoy it. With that said, when this game came up for review, I picked it because I wanted to broaden my horizons a bit. Mr. Driller Drill Land is a decent package, but I don’t think I’ve quite understood the intricacies of the franchise’s formula. This is also compounded by a core issue that permeates the game as well. 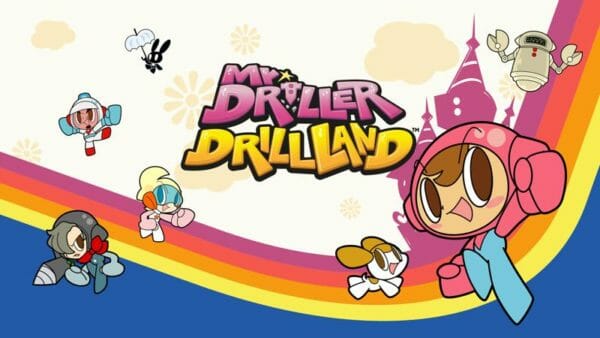 Mr. Driller Drill Land starts with a bunch of Mr. Driller characters being invited to the new theme park Drill Land. While there, much drilling occurs, along with some slightly seedy park owners occasionally skulking around.

The closest game that this reminds me of is Puyo Puyo Tetris. Obviously not in terms of gameplay, but in terms of trying to bring a classic puzzle franchise into modern times. While also introducing or reintroducing players to it. Both games also have very bright aesthetics, Japanese-flavored soundtracks, and fairly nonsensical plotlines as well.

Let’s Get to Drilling 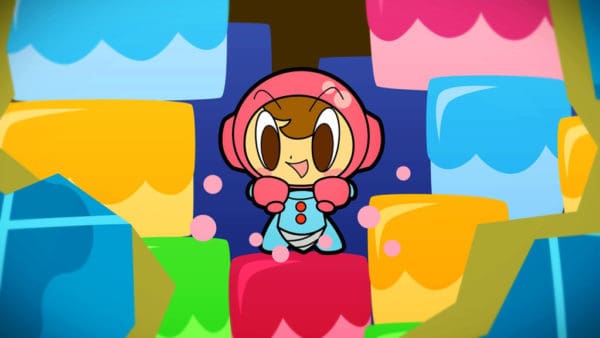 The main gameplay of Mr. Driller Drill Land consists of drilling down to reach deeper sections of a hole. You drill different colored rocks (red, blue, pink, yellow), as you go down. The things you have to watch out for are falling rocks from above and an air supply mechanic that is akin to a timer. Then, you have to pick up various air tanks in the section to resupply your tank. Falling rocks can attach to rocks of the same color as they are, providing a safety zone. So, if you bust up a green rock, you fall, and a blue rock is going to land on you and squish you (costing you a life), if it falls next to a blue rock, it will latch onto that and you’ll be safe instead.

There are also rougher rocks that require multiple drill attempts. If you bust one of these, your air supply drops by 20%, which is exactly the amount an air tank will replenish your supply. Sometimes you’ll need to bust one of these hard blocks, but it is a bit of a gamble if you already have a low air supply.

This is kind of the basic gameplay of Mr. Driller, at least that I’ve found. However, a core issue also presents itself rather quickly. Mr. Driller Drill Land has no real tutorial to get you acclimated or teach you how to play. Puyo Puyo Tetris has a fairly lengthy tutorial on getting you up to speed on both Tetris and Puyo Puyo mechanics so you can learn what to do. Drill Land does not have this. So, while I can win some levels and games, I really don’t think I’m actually understanding how to play correctly, or how to get a high score either. Truthfully, this is not an indictment on Mr. Driller as a concept, I just wish I didn’t have to go outside of the game to learn its mechanics.

Here’s a theoretical and practical example of what I’m talking about. The theoretical: Drill Land has five different Mr. Driller game types, each with slight differences in rules and mechanics. However, once again, the game doesn’t explicitly tell you “hey, this game mode is traditional Mr. Driller!” So, I just started picking random modes, until I asked someone on Twitter, “What’s the stock mode of this game?” So, I had to learn from Ian Ferguson what I should play. All the game gives you is a simple explanation on the mode mechanics and that’s about it.

Now, here’s a more practical example. For anyone who has played Katamari Damacy before, there is a short, but very important, tutorial when the game starts about how to play. How to roll, turn, jump with your Katamari in order for the player to get up to speed on how to control it. While I’m not saying While Mr. Driller Drill Land doesn’t have those exact mechanics, there are some concepts that even just a 3-minute long playable training mode would be nice to help guide new players.

As I said above, there are five game modes, each with slightly different things going on. They are as follows:

There are also a few other things to do as well. There’s a shop to unlock stuff, an incomprehensible music mode, etc., but that’s kind of about it. Plus, there are two difficulty levels, the one from the original GameCube version and a re-balanced one for this port.

This game was reviewed using a digital code provided by the publisher, Bandai Namco.

While I didn’t get everything I wanted out of this game. I do feel that I enjoyed it for the most part. To be honest, I’m still unclear on the finer points of how to play Mr. Driller Drill Land but I think I got the very basics down. In fairness, and to Drill Land’s credit, it looks fairly cute and has some great music in it. If you’re a fan of the franchise this is an easy purchase. However, if you’re new like I was, there may be other games that ease you into playing a bit better.