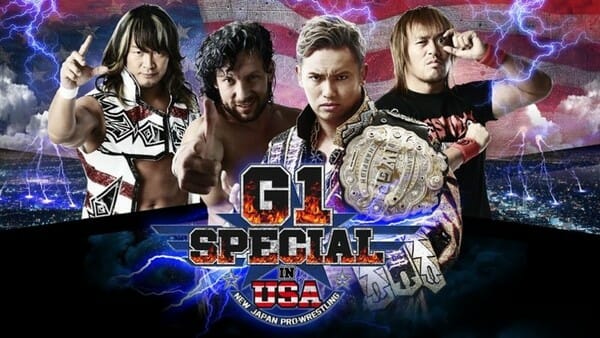 We are on the eve of a huge event taking place in wrestling history. New Japan makes their first solo venture over the Pacific to the United States. Specifically touching down in Long Beach, California for two days of action. The shows sold out in mere hours. The IWGP US Championship is now a thing. And eight men battle to crown its first holder in a knockout tournament.

This isn’t all, as Cody Rhodes looks to make it two championships in two weeks, as he takes on Kazuchika Okada for the IWGP Heavyweight Championship. Billy Gunn challenges Hiroshi Tanahashi for the IWGP Intercontinental Championship. Plus, tag matches and two more championships are on the line too. While there are many matches taking place over the two days, we focused on the big ones. The staff here predict all of the championship matches, and the entire tournament as a whole, as well. So, strap in for our NJPW G1 Special in USA Preview & Predictions. 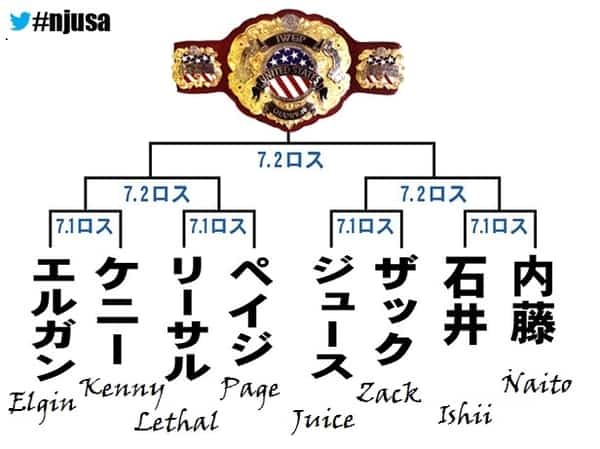 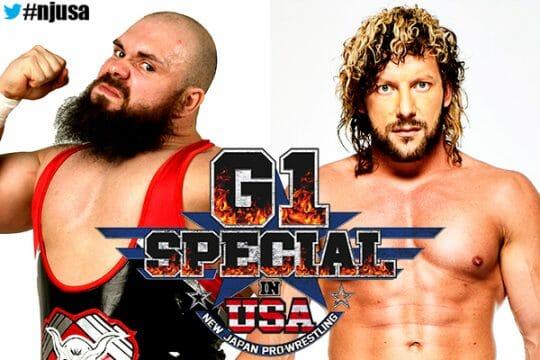 Since Michael Elgin’s NJPW debut in 2015, he has been a thorn in Kenny Omega’s side. Big Mike won his first NJPW championship (the NEVER Openweight 6 Man Tag Team) after his team defeated Omega’s team, The Elite, at Invasion Attack 2016. Despite losing the belts back to the Elite, Elgin got his revenge at Dominion 6.19 in Osaka-jo Hall. He won the IWGP Intercontinental Championship from Omega in a ladder match, the second in NJPW’s history. Sadly, Elgin hasn’t done much since that match. A combination of a broken eye socket, and Tetsuya Naito just owning Elgin in various matches has derailed his momentum.

I feel like the IWGP United States Heavyweight Championship tournament was made for Elgin. It is a way to re-establish Big Mike as a force to be reckoned in NJPW without getting in the way of the Intercontinental championship picture. Plus, Elgin wrestles almost every week in the states.  He even has his own promotion as well Glory Pro. He would be a great traveling champion to expand NJPW’s presence. Kenny, on the other hand, has Visa issues, so he would not be able to wrestle in the states as often as he needs to.

Furthermore, NJPW has bigger plans for Omega. There’s no doubt the United States would love to see him around more, but those bigger plans are more important. Whether it’s going into Wrestling Kingdom as the IWGP Heavyweight champion, or winning the G1 Climax 27 briefcase once again, Kenny will be a part of the main event. Elgin beats Omega because of that. – Angel Gonzalez 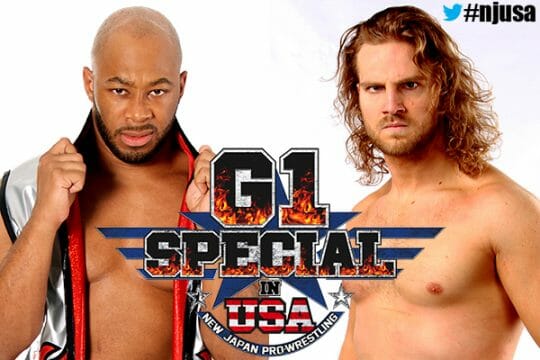 I feel Jay Lethal and Adam Page can have a surprisingly good first round match. This bout will be a true showcase for what Ring of Honor brings to the table. In one corner, the hungry young competitor, Hangman Page, looks to take down the established “Face of the Ring of Honor” Franchise Jay Lethal. Page has something in his favor, due to injuries Lethal suffered at the hands of Silas Young at ROH’s Best In The World. In the opposing corner, you have the elder statesman looking to show why he truly is the greatest first generation wrestler to walk the face of the earth. I have Jay Lethal overcoming the odds, and picking up the victory here. – Glenn Smith

Other Staff Member Predictions: Everybody Else Picked: Hangman Page. 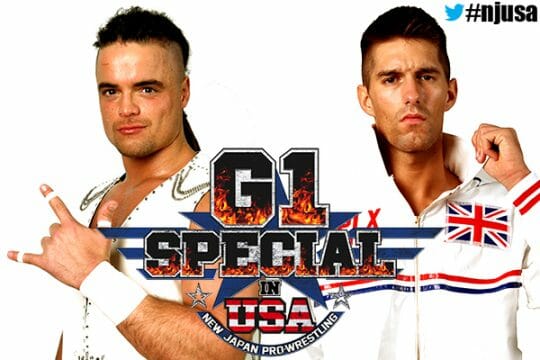 It’s been subtle at times, or overt like Zack Sabre Jr putting Juice in an Octopus Hold while another team makes their entrance in the Dominion Gauntlet match. A world traveler and beloved everywhere he goes, ZSJ, is primed for a big moment in New Japan between this and the G1 Climax.  However, he’s facing a man that’s already proven himself in Juice Robinson. Juice has unsuccessfully challenged for the NEVER and IC Titles this year, but that doesn’t mean he hasn’t shined in both matches. With both guys having a bit of feud, this has intensity written all over.

It’s easy to see the master of wrestling defeat the fiery ball of energy here. This is perhaps the toughest match to call because unlike two other bouts, these two are in opposite ends of the G1. So, they won’t face again in that tournament. I kinda feel like Juice is going to get one more chance to continue going for a title and win this one. – Sean Garmer 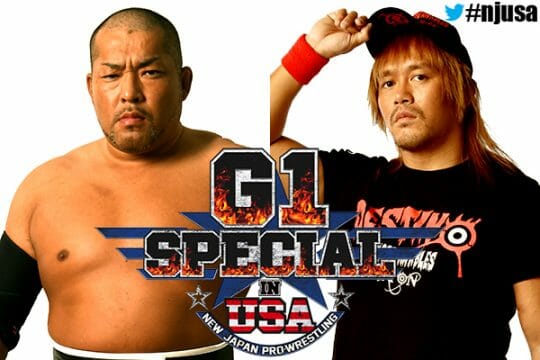 In my opinion, this is the most surprising match of the tournament. I would have thought NJPW would have wanted their two home grown talents go up against gaijin’s. Maybe Gedo didn’t want to have either Tomohiro Ishii or Tetsuya Naito losing early to a wrestler that NJPW hasn’t built up yet. Either way, the Long Beach audience is in for a treat. It’s literally impossible for either man to have a bad match. This will be a hard hitting, fast paced fight that will be a great representation of what separates NJPW from other promotions.

Since Ishii and Naito are both in the A block for the G1 Climax 27, I believe who ever wins this will lose in the G1 tournament. Ishii will likely have a strong showing in the G1. This is why, when it is all said and done, the finals of the IWGP United States Heavyweight tournament will be Naito vs Elgin. They have had one of the hottest rivalries in NJPW. So, it makes logical sense to have them finish off this tournament in a rematch from their showdown at New Beginning in Osaka. – Angel Gonzalez 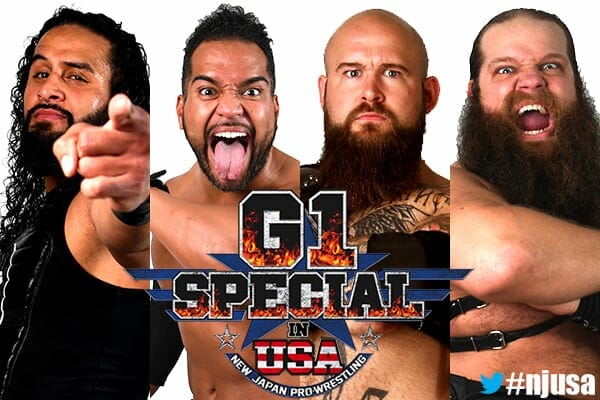 This is a rematch from Dominion which saw GoD defeat War Machine. War Machine have been able to get good matches out of GoD. With this match being in front of a hardcore U.S. audience, War Machine will be the crowd favorite. Look for another all action, big man, hard hitting match. War Machine should win, and regain the tag titles here. – Tom Reese

Other Staff Member Predictions: Everybody Else Picked: Guerillas of Destiny 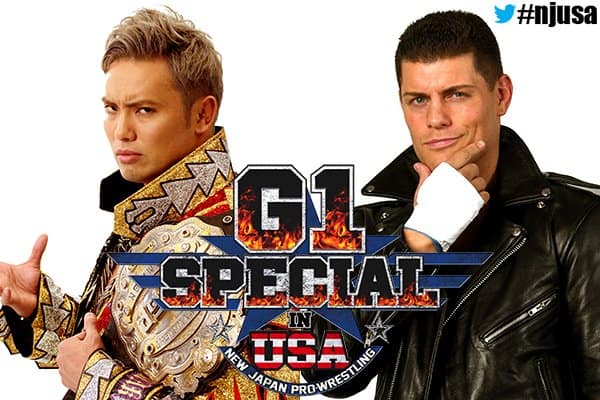 Kazuchika Okada is on the greatest run of any world champion in history. It’s almost becoming redundant talking about it, but he continues to raise the bar to an unrealistic level every time. Cody Rhodes has become quite possibly the most polarizing wrestler among the hardcore fans. There is a vocal segment of the fans, be it minority or not, that just won’t accept him in main events.

Some believe it’s because he’s a product of WWE, and is benefiting off of that, or his last name. Truth be told, he works hard at getting his name out there and promoting himself, and it’s paid off for him big time. Is he worthy of being in the main event for the IWGP Title?

Who’s to say. The show sold out instantly before any matches were announced. He’s in a unique position after having won the ROH Title last week, and now is in a rare champion vs champion match between two champions of significance in years. Logic would say there’s absolutely no way Rhodes would win the IWGP Title. A 60 minute draw would seem unlikely since Okada is coming off the great draw against Kenny Omega a few weeks ago at Dominion. Would ROH allow their champion to lose?

The match has a lot of intrigue simply because the finish is a mystery going in, and people are genuinely interested in what happens, regardless of which side of the Cody Rhodes fence they’re on. With Okada leading the way, the match will undoubtedly be great. What will happen with the finish is the real story here. I’ll go out on a limb, and predict an upset with Rhodes winning the belt. – Tom Reese

Other Staff Member Predictions: Everybody Else Picked: Kazuchika Okada 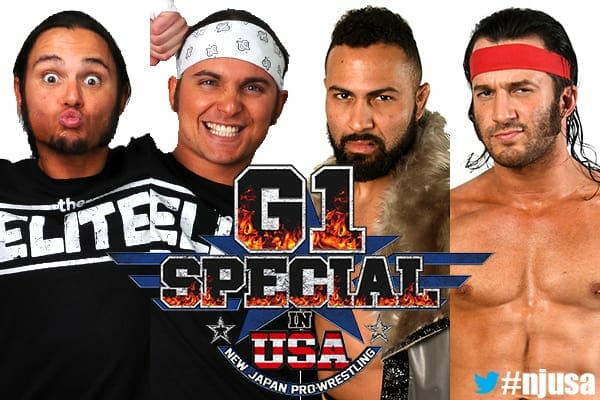 These two teams have really performed well together all year, with some absolutely stellar performances from both Rocky and Trent in both of their big title matches at Wrestle Kingdom and Dominion. We’ve seen the Young Bucks target one person, absolutely destroy them, and then go to work on the other. The drama in these matches has been terrific, and the crowds have become incredibly invested in Roppongi Vice. I’m really looking forward to what they go for during this match.

It’d be interesting to RPG Vice try and flip the script, and isolate one of the Bucks, but I’d wager this will be a total balls to the wall, flippy spectacle to really wow the crowd. With that thought in mind, I’m picking the Young Bucks to retain in their own backyard after Trent maybe goes a little to overboard with his big spot moment that he’s been utilizing in these matches this year. – Paul Leazar

Other Staff Member Predictions: Everybody Else Picked: The Young Bucks 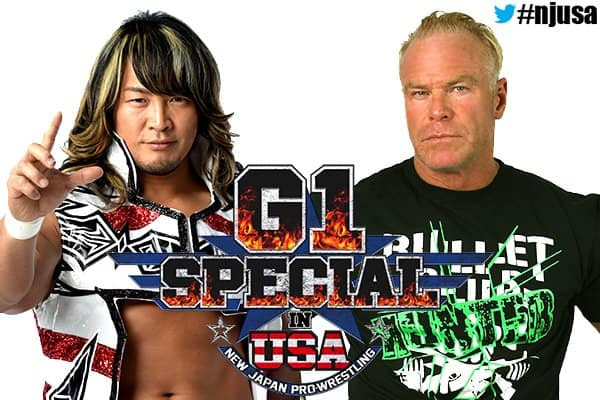 Billy Gunn being in New Japan is still a surprise honestly. Being in the Tag League is one thing, but the fact that he’s stuck around to do different tours shows a willingness to want to be there. Not to mention, tagging with probably one of New Japan’s worst wrestlers in Yoshitatsu. Getting an IC Title match with Tanahashi is a big deal, but it fits the theme of appealing to the U.S. audience. People know the former Mr. Ass from his WWE days no doubt. The dude is still in great shape for his age, and he can still go to an extent. Tanahashi is one of the greatest of all-time. If there’s anyone that knows how to work with what’s presented to him, it’s the former ACE. I’d expect this to exceed expectations, but probably not go too long. Tanahashi retains without a doubt. – Sean Garmer

Other Staff Member Predictions: Everybody Else Picked: Hiroshi Tanahashi

This concludes our NJPW G1 Special in USA Preview & Predictions. Be sure to checkout out our other content on the site. Also, you can listen to Sean and Paul give predictions on the show, on the latest Wrestling 2 the MAX Podcast.