Firstly, I should note that this isn’t going to be a full review of Persona 5. Mainly because we already have a review of the original Persona 5 on the site. Also, quite frankly, anyone and everyone should have played Persona 5 when it came out years ago and if you didn’t, you’re a monster.  Instead, this review focuses on some of the differences between base Persona 5 and this director’s cut of the game, Persona 5: Royal.  In simple terms, yes, you should buy and play this game. Especially, if you never played the original version. And although many of the changes made in Royal are generally good, there a few are headscratchers as well. 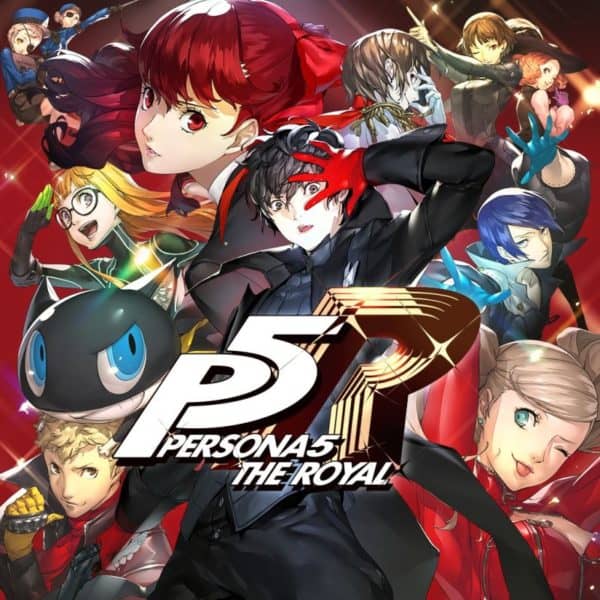 To start with, about 90 to 95% of Persona 5: Royal is the same as the original. However, there are changes both big and small that make the game a lot friendlier, even if it doesn’t appear so at first.

Probably the biggest addition to the game is a new playable character, in the form of Kasumi Yoshizawa. She is a first-year student at your school who is introduced slowly over the events of the game. I should say very slowly actually, as her interactions are extremely sparse for most of the game until at least the midway point. Then, she becomes a more fleshed-out character who is absolutely pivotal in the later sections.

The other big new (non-playable) character is Takuto Maruki, a school psychologist that you can visit after you complete the first dungeon. He is interested in the cognition of the world and asks you to talk with him about it. Visiting him increases your SP (magic), which is nice.  Like with Kasumi, Maruki also factors in heavily in the expanded ending.

Lastly, while he was a main character of original Persona 5, Goro Akechi’s role is also expanded as well. His confidant relationship in the old game automatically leveled up as the story went on. In Royal, you actually have to seek him out in the new town area and hang out with him like the other confidants. 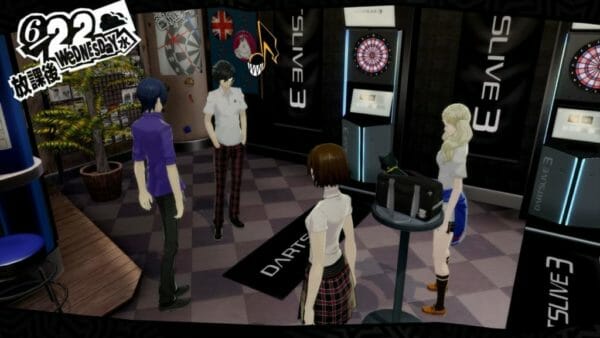 The big new area is called Kichijoji and it has several things for you to do inside of it. Probably the biggest new thing is a combination of a dart and pool hall that provides benefits to your team.  The dart mini-game has terrible motion controls but is needed to help increase the effectiveness of the Baton Pass (turn swap) of your teammates.  Pool isn’t a mini-game at all, just a check against your proficiency skill, with you completing it, based on your level.  The pool activity raises your Technical damage skill, letting you do more damage based on specific attacks, and increasing the chances of knocking down enemies.

Aside from the Pool Hall, there are a few other things to do in Kichijoji that are beneficial. You can go to a Jazz club with someone to give them bonuses to their persona. It depends on the day but you can give them stat bonuses or even new abilities if you go on the right day. This is greatly useful if you want to teach them a specific move they wouldn’t normally have access to.

There are also shops where you can sell dirty clothes, new places to buy food, a Temple to visit to gain more SP and so on. Kichijoji is basically about the size of the other hub-type city areas in the base game.

Battles typically play out the same way as base Persona 5. Physical attacks, gun attacks, Persona attacks all work the same way. There is the Technical damage thing, which is slightly tweaked here, but unless you are doing a difficult run, you won’t see it much.

One welcome change is how the game improves guns. In the old game, you would have a very limited number of bullets for your weapon.  Each character had a different weapon. For example, Ryuji‘s shotgun had 4 shots, while Morgana‘s slingshot had 5. You had different clips but still maxed out in ammo, like Ryuji had 16 shots total, and Morgana had 25.

In Royal, this is different.  For one, after every battle, you gain all the ammo back. If you totally expend your ammo during a fight, it is completely filled up for the next battle. Sounds good, right?  Well, it is countered by basically not having the clip system at all. So, Morgana ONLY has 5 shots per battle, while Ryuji has a total of 3. You may think this is a reduction but it’s really not. This gives you a lot more flexibility to actually use guns since you only run out of ammo during fights. And not when you’re in a dungeon or in Mementos.

There are also Disaster Shadows that you’ll run into occasionally during battle. These enemies have purple textures on them to denote they are special. The more damage you deal to them, the more they explode once they are defeated. So, it is generally best to aim for them first as they can obliterate the rest of the enemies you are facing if you play your cards right. 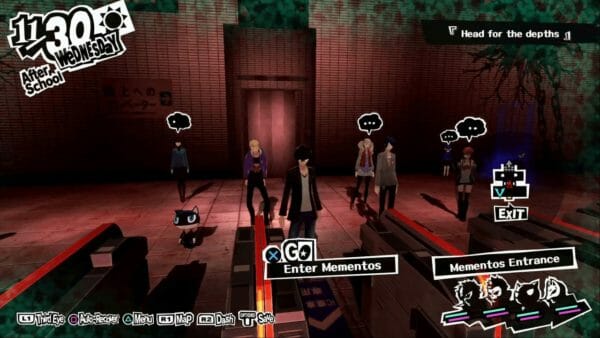 Mementos generally operate the same but with some fun new mechanics. There is a young boy in Mementos named Jose. Jose wants you to find stamps and flowers while in Mementos and each of these does different things.

The stamps you find let you alter the cognition of Mementos.  Basically, you can change certain variables of the experience points you gain, the amount of money from monsters, or the number of items from monsters.  Each variable has a baseline but can be increased by giving Jose stamps. So, experience starts at 100%, but goes up to 200%, in 10% increments, based on the stamps.  Each main area of Mementos has a fixed number of stamps, so you can’t just farm endlessly for them. You’ll get about half the number of stamps through one run, and then you have to hunt down the rest.

However, flowers are a different matter entirely because they can be farmed as much as you want. As you go through Mementos levels, you’ll find dozens, if not hundreds, of flowers that you can spend at Jose’s shop.  He generally sells SP restorative items, battle items that cause status effects on enemies, and transmutation items to turn Personas into items or gear.  He does have a limit on certain items, typically one item per Mementos visit, but you should have no problem cleaning him out of most inventory whenever you want.  Jose also can purify items gained from Will Seeds too.

For all the shots of your character swinging around a grappling hook and that high-flying stuff, dungeons are about 97 percent the same. There are areas in each dungeon where you can use the grappling hook. This is usually to get to a higher point in a level or to bypass some annoying task from the original dungeon layout.

However, the only real difference here is the Will Seeds. Each dungeon has three items for you to collect that are usually hidden away where you may not normally stumble upon them. If you find all three, they combine into a crystal that gives the wearer special abilities. For example, if you get all Will Seeds from the first dungeon, it gives you the skill Diarama.

Once the dungeon is completed though, you can take the item to Jose and he will fashion a ring out of it.  This unlocks the full power of the item and unlocks another ability or something to make it even more useful. 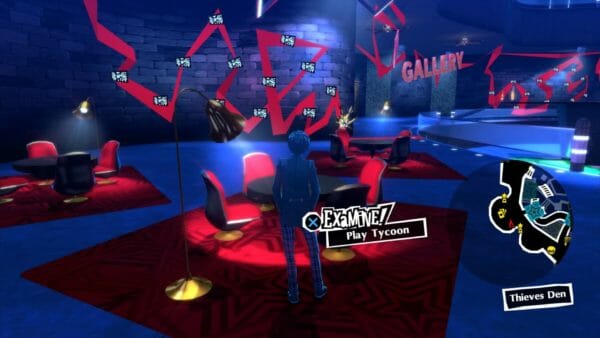 One of the more befuddling aspects of Royal is something called the Thieves Den. This is a separate area from the main game, it’s basically a social space for you to decorate a few rooms. You can select the theme, put down objects, select the music, and even change your playable character.

There is also a weird Uno-like card game you can play against other party members. Earning you currency for use at vending machines to unlock more customization options. You can also earn currency through completing in-game milestones, such as hitting six home runs during the batting cages or getting the mythical fish in the pond.

Honestly, I don’t really get the point of this place? Although you do get some funny and at times interesting dialog between certain characters, and it is nice to be able to see concept art/anime sequences from a gallery too. I think that is better served as an option from a menu. I don’t find the card game particularly fun, nor is the act of buying stuff from menus any fun either.  If the developers wanted to include some museum-style pieces to let you see characters, they should have just let you actually do that with a model viewer instead. 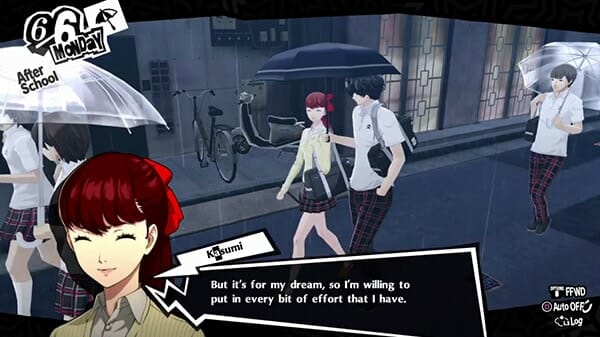 The biggest addition to Royal, aside from the new characters is the new story content.  It basically amounts to a “What If?” scenario about everyone getting their fondest wishes and you having to bring everyone back to reality.

It is a neat idea in theory that hardly gets touched upon at all. For example, one of the scenarios wonders “What if Ryuji was popular and still on the track team?” or “What if Futaba’s mom was still alive?.” Although they are reality-breaking questions, there just isn’t a lot actually shown for them. Everyone does get one or two scenes in their new reality before Joker wakes them up but that’s about it.

There’s also just not a lot of actual time spent in this new world. You can’t go everywhere, and not every confidant has a new reality either. You basically get about a month and a half to fix things before this chapter ends and about a third of that is taken up by the usual investigation/visual novel stuff, so even if you wanted to clear up any lingering loose ends, you would be hard-pressed to do so. Again, the conceit for this additional content is clever, but it’s not exactly fully formed.

This is a minor point to most people but a godsend to me. The trophies in this game are actually not insane to get.  Base Persona 5 had some incredibly annoying achievements, chief among them doing all of Mishima‘s requests and (worst of all) trying to get 250 Futaba navigation lines.  I literally replayed Persona 5 four times to get the Platinum Trophy, because of this.

Thankfully, Persona 5: Royal has much easier trophies. I’d say at least 75% of them are achieved from doing the main story, or basic extracurricular activities.  The rest may take a bit more time but are also still fairly doable.  I managed to get a Platinum Trophy in my first complete playthrough, which surprised but also pleased me.

How do you compare Persona 5 to Persona 5: Royal?  Well, in almost every way it’s the director’s cut of the original game.  Most of it is good, some of it is a tad mediocre but nothing is bad.  It is the definitive experience of Persona 5, even if the epilogue is a bit rushed. Ultimately, it still remains the same steller gameplay, memorable characters, amazing soundtrack, and sheer artistic vision as the original game.