I’ve liked at least half of Supergiant Games titles.  Bastion was a superb game from a new studio. While Transistor had some issues that kept me from enjoying it. I liked Transistor, to a point, and that point was my save game got corrupted and forcing me to restart it again, (which I didn’t do).  Still, they are one of the few independent studios out there with a proven track record.  Pyre is a departure for them in some ways. However, it keeps enough of the essence of Supergiant in there. 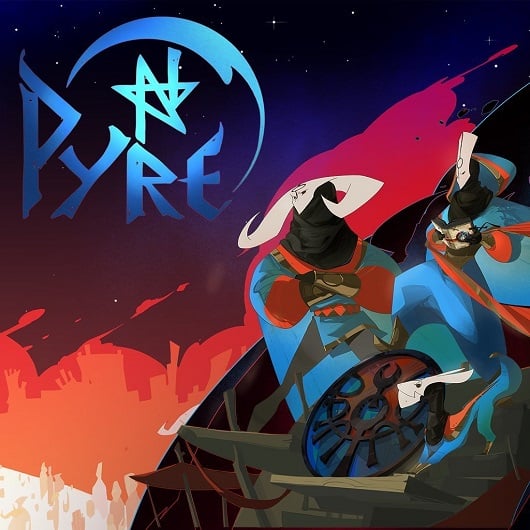 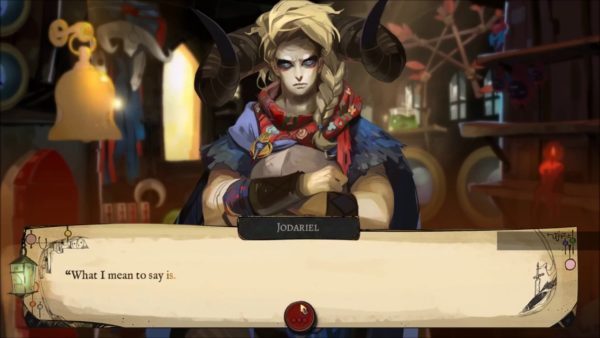 One of the highlights of Pyre is the story and how it unfolds.  The crux of the story is that everyone is essentially in a purgatory jail. By playing Pyre, characters can escape purgatory and head back to the Commonwealth, with your crimes expunged.  You and your team are called the Nightwings and every so often, you can send someone back. Giving you the option to send one of your teammates through to the other side.

This has a positive effect on usually lifting their spirits. However, there’s also a negative effect on your team of losing that player permanently.  Do you want to give freedom to Hedwyn who really desires it, and has many matches under his belt. Perhaps you should cast off Ti’zo who has really never known freedom at all.  It’s this push and pull of your teammates that is one of the underpinnings of Pyre. 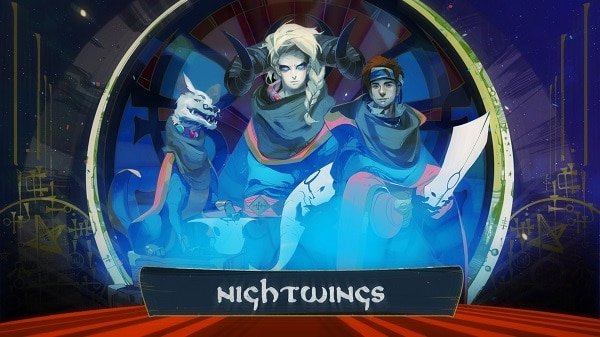 On that note, all of your characters have fairly distinct personalities that endear themselves to the player, on and off the court.  Hedwyn is a fairly noble character but is not totally saccharine. While Sir Gilman is prone to drastic emotional outbursts which are hysterical.  Even the enemy teams are fronted by characters with good personality. Notably, Dalbert and Almer a father/son pair. As well as, Manley a vain and rich talking tree.

I won’t spoil it too much, but the ending of the game is highly dependent on who you send back after you complete the trials.  I opted to send back all of my own team members and had a fairly happy ending, but not overtly so.  You can actually elect to lose the final match of the “send someone home” trial, so instead of your teammates going home, the other team’s member can do so instead. This actually doesn’t end the game at all. Instead, it adds some real replayability that extends the experience. If you want to see all the permutations of how the game can end, it does take some time to view them all. 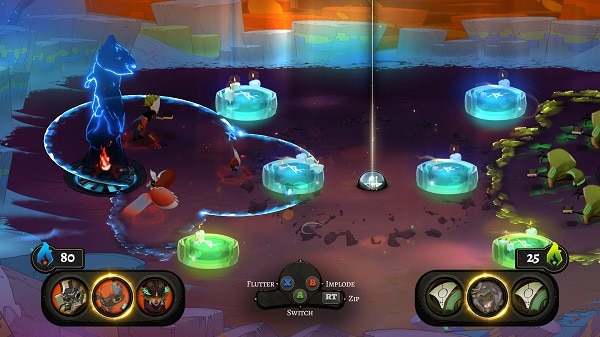 Pyre is really two parts of a game.  The first and more obvious part is the sports game.  The second aspect is the cart/story parts, almost akin to Oregon Trail.  Let’s get to the flashier part first.

At its core, Pyre is a three-on-three sports game that is very analogous to something like NBA Jam, or to a lesser extent, the original Xbox game Deathrow.  You only control a single character. Although, you can switch on the fly to another. The goal is to get the ball in the other team’s Pyre (goal), by either shooting it or spiking it. Just be careful because spiking it causes that character to sit out the next round.  Shooting lets you keep the player, but is generally a more dangerous affair because you can be knocked out by the opposing team’s players.

When you’re playing on defense, every character has a ring of energy around them.  If the other team’s member has the ball and they run into your ring of energy, they get eliminated for a few seconds. Thus allowing you to collect the ball.  The same goes for you as well. Once you pick up the ball, your energy ring dissipates, so you become defenseless and have to avoid the other team’s energy rings as they chase you. 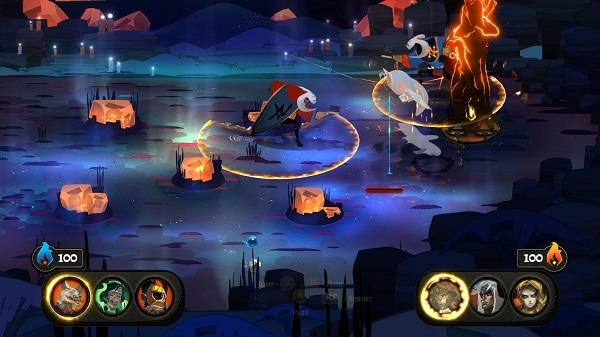 Aside from the offensive move, each character typically has a sprint move to get around the field faster. While certain characters have some type of jump/fly move to navigate obstacles or to dodge an attack.  These moves are governed by a stamina meter that depletes quickly. But it does recover after a few seconds when you’re not expending it. 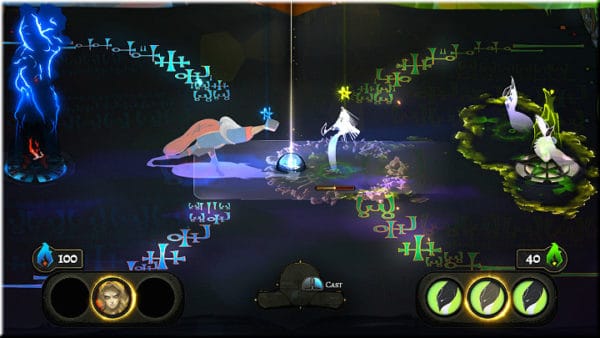 There are over 10 playable characters in the game. They all have their own strengths, weaknesses, and moves.  For example, Jodarial is a big demon that has slow walking speed but has a big energy ring around her. Allowing her to jump and stun foes for a second or two.  Rukey is a small dog that is very nimble, but also has a small energy circle.  Pamitha can fly around and charge opponents, which actually makes you temporarily invulnerable during it.  Each character has their own abilities to make them effective. But there’s also a trade-off with each character as well. 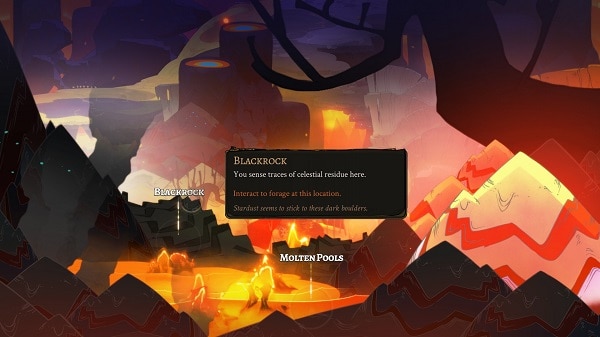 The other side of Pyre is your time spent in the cart.  This is your home base area that you use to travel to different matches among the stars.  You can talk to your teammates if they have something to say. Outfit them with different gear (talismans in this case). Do training matches and read the big book to get background details on the world.

Between matches, you’ll also have different events pop up that give you some choice.  Typically, you can get to the next match by one of two paths. Usually, two different team members will have different reasons for taking one path or another.  One path might involve Sir Gilman wanting to swim around. While another path might have Rukey trying to scrounge around for materials.  Sometimes you will get an item or money from taking a certain path. Other times your character gets a temporary, or rarely permanent, stat increase. 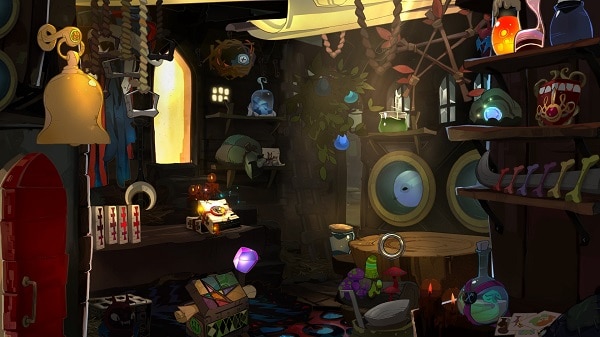 You can also do special training missions for your characters.  Occasionally a ghostly figure in your cart will call one of your teammates to do a special 1 vs 3 match.  This is, as you can imagine, a bit of a challenge. Although I wouldn’t call it ridiculously difficult either.  If you manage to win, you get a special talisman for that character, which augments their abilities more than a normal talisman.

Honestly, one of the few criticisms I have of Pyre is the cart system.  It’s not bad at all, but actually navigating the cart feels like a cluttered experience.  About six hours into the game, I stumbled upon one of the knickknacks in the cart that turns the visuals into an amber hue, just randomly.  I kind of wish there was an option to turn on indicators like “This object actually does something, and this one does not”.

Normally I wouldn’t bring up audio in a game. But Pyre is a special exception.  As you play a match, you’ll have a narrator commenting on what’s happening.  It’s the same actor SuperGiant has used before, Logan Cunningham, doing his damnedest David Warner impression.

The music is also good, notably the music during a final match to decide who goes home.  If I can level another criticism though, there is a lot of text and reading in the game.  I kind of wish there was more voice acting, either from the narrator, or the other teammates, when having scenes of dialog with them.  This is not a huge detriment, but it might have helped bring through some of the immersion in a better way. 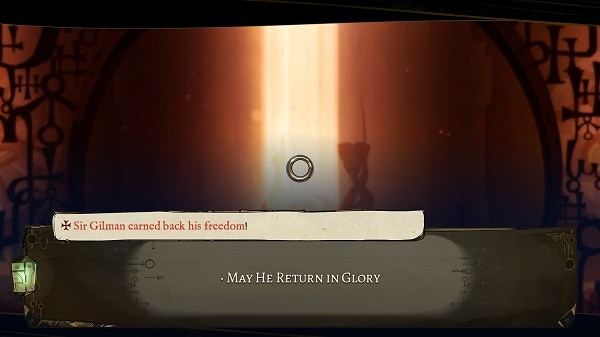 As said earlier, the ending is highly variable and can lead to you trying different ways to finish the game.  Aside from that, there is a Versus Mode to contend with.  This brings in your characters from the story, as well as the main members of the other teams from the story.

You are free to do a custom match with any team chemistry against another team.  Either play solo or against someone else, but only locally.  I’ve seen a few gripes about there not being online play. Honestly, though, it’s fine.  Actually, I’m not sure online play would really benefit the game much, as I could see it being kind of lopsided in how you could easily overpower another team.

Overall Thoughts: 9.0 out of 10.  Pyre might have an occasional rough edge here and there. But it really holds up the Supergiant Games legacy of crafting truly unique gameplay systems. Along with wonderfully fleshed out worlds.  The core sports game is challenging but always rewarding. The characters are memorable. Plus, the way you can alter the game’s ending is truly fascinating.  If you’ve liked their work before with Bastion or Transistor, this is an easy pick up. If you haven’t played either of those games, know that Pyre offers a special experience pretty much anyone can enjoy.

For the sake of transparency, the publisher (Supergiant) provided a digital code for review purposes.