Since Ratchet and Clank landed on store shelves on November 4, 2002, the duo has graced our television screens in over 15 different adventures.  Coming off of their success with the Spyro titles, Insomniac Games wanted to move on to a different style of platforming game and landed on a series that allowed gamers to mix and match different weaponry. Thus, allowing the studio to really showcase their creativity as well. The series grew so large that a movie based on the events of the original game released in 2016. It was that movie, and the PlayStation 4 game that came along with it, that brought Ratchet and Clank back to the forefront of gamer’s minds.  Sony jumped on that success and pushed for the duo to be one of the first to really demonstrate the power of the PlayStation 5 with Ratchet And Clank Rift Apart. Did the two partners succeed in their mission, or like Dr. Nefarious, did their grand plan ultimately fail?

Ratchet And Clank Rift Apart: Close to Perfection For the PlayStation 5 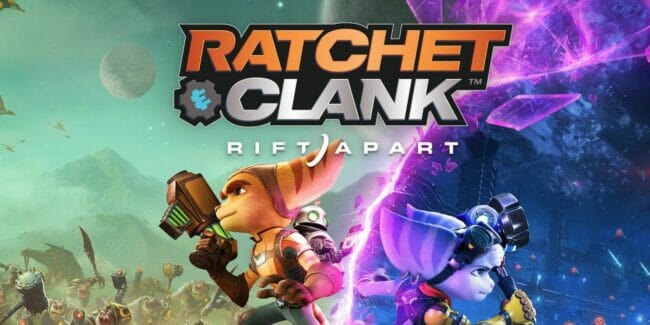 Ratchet and Clank Rift Apart begins with a parade to honor the pair for their previous heroics. During the celebration, and after a small attack that works as a perfect tutorial, Clank shows Ratchet that he has repaired the Dimensionator so that Ratchet could finally go and find other Lombaxes.  The Dimensionator acts as a portal jumping device that allows the user to jump from one dimension to the next.  Unfortunately, during the reveal, Dr. Nefarious interferes and tries to take the Dimensionator for himself.  During the battle the rift creating device is destroyed causes a very large explosion, sending Ratchet and Clank in opposite directions and creating multiple unstable rifts all over the place.

Clank finds himself in a dimension where Dr. Nefarious was actually successful in his missions to take over the galaxy and is now known as Emperor Nefarious.  He is found by a female Lombax named Rivet, who is uncertain whether to trust Clank or not but brings him along anyway. Allowing Clank to prove that his best friend is actually another Lombax. In the meantime, Ratchet wakes up in the same dimension and witnesses Rivet and Clank together as they are escaping the planet, and with the help of some alternate versions of his old friends, takes off after them. Meanwhile, Dr. Nefarious is enjoying seeing statues of himself all over the place and takes the spot of the Emperor while he is off on a mission. Letting the evil doctor enjoy the spoils of victory for the first time in his life.

Ratchet And Clank Rift Apart does not reinvent the wheel when it comes to 3D platformers, but it does get close to perfecting it. The key feature is the rifts that allow Ratchet or Rivet to basically lasso one of the openings and pull themselves to a different section of the map. The mechanic basically acts as a grappling hook most of the time, while also creating a cool visual as you fly through what looks like a hole in the wall and end up in a different spot. However, For a mechanic that was touted as the selling point of the game, it is a bit disappointing. The trailers showed Ratchet flying through different worlds in an instant, but those moments only happen during on-rail sections and usually only last for a few seconds before you get pulled back into the dimension where you began.

What helps move the game along is its variety of genre types with lots of shooting, a few platforming tests, and rails sections returning as well. And while these all play wonderfully well, there really isn’t anything new about them either. Honestly, this is probably the main theme of the entire game. There’s nothing really new to focus on, instead, Insomniac basically just perfected nearly all of its different facets. I say nearly because I do wish there was more side content. A battle arena exists which has the usual “beat this many waves of enemies and then defeat a boss.” There is also a side mission where you fly on a giant creature to help it collect food, which then allows you to use that creature to get a special collectible later. However, there is not much endgame content to go back to other than basically doing a New Game + Mode.

What About Them Guns

The gunplay has always been the strength of any Ratchet and Clank game and that is no different here. All of the combat revolves around moving around enemies and unloading on them with whatever gun you choose to use. Each gun has its own unique twist and can be used in combination with each other to really create massive damage. For example, you can use the ice gun to freeze your enemy and leave them vulnerable and then switch to a rocket or shotgun-style weapon and hit them with a big shot. Hopefully, in a future installment, more depth can be added in the form of strengths and weaknesses for guns depending on an enemy type. On the plus side, each gun still features its own leveling system which promotes experimentation with the weaponry so you can up your arsenal if you will.

Although there is a strong variety with the guns themselves, the levity that came with some of the older games seems to be missing here. You have your classic pixel weapon, The Pixelator, but aside from that there are no other weapons that are used in a comedic aspect. Gone are the weapons that turn your enemies into different animals or turn the battle into a dance party. Instead, each gun has its own unique twist that allows for strategic use. It also did not take long for me to find overpowered combinations either. For example, I would drop a sprinkler to cover the enemies in hedges, which basically freezes them. Then, I’d follow that up with a Glove of Doom that would release a few tiny critters to run and attack the enemies. Finally, I’d finish it off with any machine gun-style weapon from a distance to unleash all sorts of hell.

When it comes to platformers, smooth controls are crucial and they are nearly perfect in Ratchet and Clank Rift Apart. The camera is easy to control, even if it does try to fight you a little in tight places, and also helps keep the action in front of Ratchet or Rivet. The Gunplay feels good and weapons all fit nicely on the weapon wheel which can be accessed by the push of one button. Platforming is also smooth and even with everything going on it is usually not difficult to see where you need to go.

Just like Astro’s Playroom, A Rift Apart showcases the Playstation 5 DualSense controller.  For those players that do not like their controller to make lots of noise while they play, I’d suggest turning that option off. As I don’t remember a moment where my controller ever shut up.  However, For me, those sounds add to the immersion of the gameplay as they work in conjunction with all of the different vibrations you feel as well, which is one of the major reasons why I love the Dualsense.

If you are looking for a colorful world, this is the best you are going to get right now. Every area and dimension in this game pops off the screen and has such amazing detail in it too. This becomes even more impressive during wild events in the game where there seems to be too much happening on the screen.  During some of the battles, there might be 15-20 enemies on screen, bullets flying everywhere, and all of the background movement going on and I never witnessed a visual dip in quality or a loss in framerate. For those that care, Ratchet and Clank Rift Apart has multiple graphics options, but the one that I suggest is the Performance RT mode. It uses fancy ray-tracing, amazing visuals, and a fantastically smooth and fast framerate too.

There are nine different worlds to explore in A Rift Apart and each one brings something unique and different. Whether it is the dark city landscapes on Corson V or the luscious landscape of Sargasso. Every single world feels special and keeps things fresh throughout its 10-15 hour experience.  My one complaint about the levels is that many of them just seem too small. With the use of the rifts, levels are artificially separated to create areas where Ratchet or Rivet use those rifts to get from one side of the map to the other.  Unfortunately, it creates a few different maps in the game that seem like they are filled with a couple of small sections to play in and I really just wanted more of those small areas too.

Like most 3D platformers, Ratchet and Clank Rift Apart is filled with different collectibles to find if you so choose. Trophy Hunters will be happy to know that unlike in other games, most of the collectibles do not require you to reach 100 percent completion to unlock the trophy. You could also make the case that most of the collectibles are very useful for the journey and not just there for looks. Along with the bolts and crystals that are found and used to upgrade weapons, you can find different armor sets that unlock passive bonuses whether they are equipped or not. There are also 10 spy bots hidden throughout the game that when found, will unlock a special weapon. The Gold Bolts unlock different cheats on the menu. Those cheats can give you an advantage like unlimited ammo or change the appearance of the game like giving Ratchet a big head.

On a side note, perhaps the coolest collectible in the game is the one that isn’t recorded anywhere, other than via a trophy, and that is the CraiggerBears. There is one CraiggerBear hidden in each world and they were placed into the game to pay homage to one of the Insomniac developers who passed away during production, Craig Goodman.

Ratchet and Clank Rift Apart is nearly a perfect platformer. It is so fun that I never wanted to put it down and I went for the 100 percent completion as a way to keep playing it, even when the platinum trophy does not require it. This is my favorite current-gen game and also my game of the year so far. This is going to be a hard one to beat for the rest of 2021.