The Red Strings Club is a bit of an interesting game. A large portion of this cyberpunk point-and-click adventure is spent examining in detail the pros and cons of a societal system that could remove negative emotions. Including emotions like depression and anxiety at the drop of a hat. Is such a system even ethical? Should such a system be used without warning? Well, the mega-corporation behind it is sure planning on it. And is the power of being able to dull the negative parts of life too much for one person to bear? All these questions come up in The Red Strings Club. And It is up to the player to help the protagonists come to their own decisions. 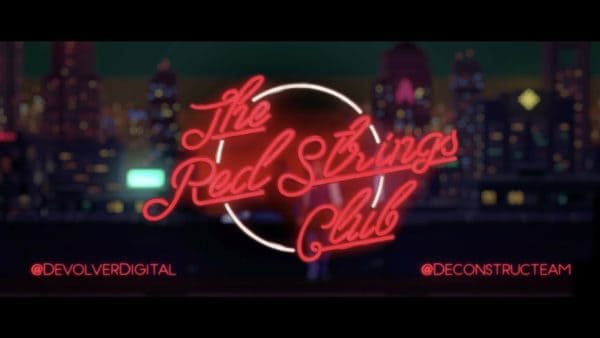 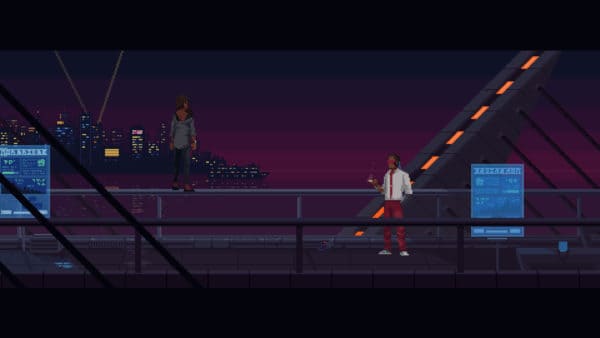 The Red Strings Club begins where it ends, with hacker Brandeis falling from a long way up. He’s rather at peace with his end though. Only wondering when, exactly, his fate was sealed. For the answers, his mind races back to the beginning of this endeavor. Playing piano in the titular Red Strings Club alongside the owner and proprietor, Donovan. A brief conversation ensues, showing that these two men have been compatriots for a good long while. Then, Donovan decides his friend needs a drink.

After that, We are introduced to one of the main gameplay elements. wherein Donovan uses some form of mysticism, (which is never quite fully explained) allowing the player to help him mix a drink. Thus, matching the customer’s mood. This is accomplished by moving a circle on the screen via mixing different amounts of spirits in a glass. Then, once you have a circle matched, you may serve the drink. In my case, I decided to serve Brandeis something that played to his anxiety. 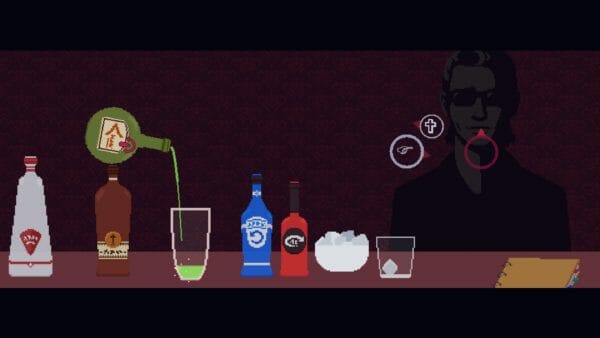 This also reveals another interesting subsystem of The Red Strings Club. Almost every decision you make is mapped out on a dot-matrix grid. While you make each decision, the game connects the dots with a red string. This reminds the player that every choice in the game has consequences. Although it may not look it, one thing does indeed flow into the next.

Brandeis outlines a few fears that the megacorporation Supercontinent Ltd is up to no good. Proof of his statement comes stumbling into the club in the form of a bullet-ridden android. By delving into its memories, Brandeis and Donovan find out Supercontinent is planning to unleash a system called Social Psyche Welfare (SPW) on the general populace. A system that uses the neural implants installed in just about every member of society to eliminate negative emotions.

Even more chilling, Supercontinent plans to launch this system silently. Leaving users unaware of what is happening. Donovan and Brandeis repair the android, which is equipped with the ability to be empathetic and analyze people’s emotions and personalities almost instantaneously. So, their mission becomes finding out all they can about SPW and stop it if need be. 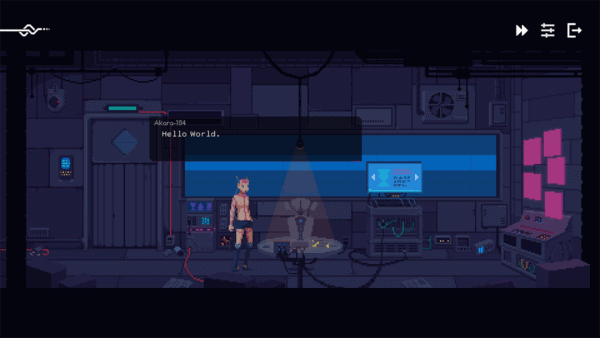 For the majority of the game, you play as Donovan. Serving drinks and talking with various players about the drama surrounding the SPW system. You must determine a patron’s mood in order to align their drinks. You also must ask the right questions at the right times. This helps get useful bits of information out of them. After a conversation is finished, the android (Akara) quizzes you on the person’s personality. While also examining the subtexts present in the conversation as well. If you do well enough, Akara gives you a prize, which is usually a pill. These pills allow you to reset a conversation and start all over. And also still keeping the information you gained the first time around.

It is in these conversations and quizzes that The Red Strings Club really shines. Pulling no punches in poking and prodding at your ethical decisions. At least once a quiz, Akara asks Donovan for his opinion on an ethical quandary brought up during the previous conversation. For example, one of the first such questions posed to you can be “Is SPW ethical?,” to which Donovan can respond with either a straight “yes” or “no,” or more qualified answers, such as “Yes, but not without letting the public choose.” 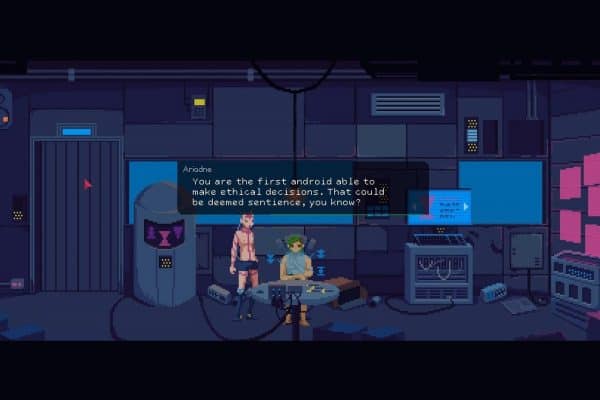 Each of these responses also has its own dot on the grid. But Akara also usually gives you food for thought about why Donovan’s answer may not be the best. This point-counterpoint dynamic serves well to make the player think about their stances.

All of this is set primarily against the backdrop of the Red Strings Club itself, which is a fairly nondescript bar you could walk into right now. That’s actually an interesting choice for a game set in a decidedly cyberpunk dystopia full of neons and implants. This, combined with the mostly chill electronic soundtrack, brings you more into the conversations you are having. 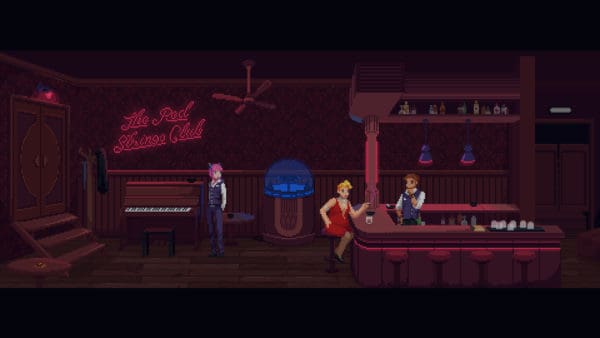 As strong as the game’s writing usually is, there are a few nagging issues I have. Firstly, for a point-and-click based game, there isn’t a lot of exploring. Places where you actually move characters around and examine your surroundings are few and far between. You’ll spend a lot of time clicking through text and selecting dialogue options. However, when you do get to pour drinks or mold bio-implants, those mini-games are pretty well crafted. While also serving as a nice palate-cleanser between dialogue trees. It’s also interesting to note that the game has no direct fail states. This means the game does not let you serve a bad drink which isn’t aligned to the mood of the customer.

Next, notice how I said the writing was “usually” pretty strong? Yeah, there are a few minor missteps in certain situations. Mainly, where the game puts in some clunky exposition with characters talking about something, just so the player can be informed of said information. In addition, while the characters are for the most part grounded in reality, there is at least one character that feels a little too heavy-handed with supernatural powers. 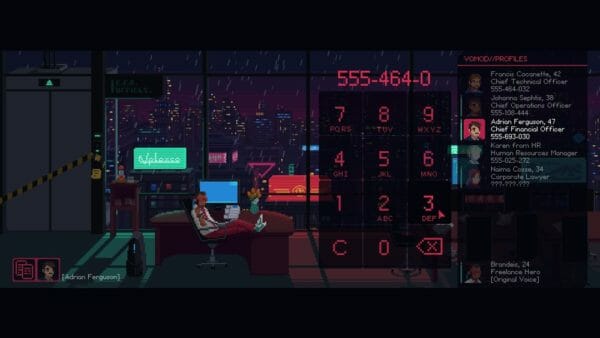 Finally, for a game predicated on decisions having consequences, I did find it rather odd that there wasn’t more freedom of choice in the early-game implant installation segment. You play as Akara before he stumbles into the bar shot to hell, and as such need to install implants into customers to solve their issues. If you don’t install what the game deems as the “correct” option, even if the option you choose would ostensibly solve the dilemma, the customer just loops back around. Odd, but not entirely unforgivable.

Overall Score: 8.5 out of 10. Outside of a few minor nitpicks, The Red Strings Club is an enjoyable experience for those interested in either its aesthetics or its themes. For $15, you get at least four hours of gameplay that will make you question a few of your stances in regards to technology and the ways we as a society control negative emotions. Plus there’s even more if you decide to see in what ways your choices can affect the narrative.

This game was reviewed using a digital code provided by the publisher Devolver Digital.