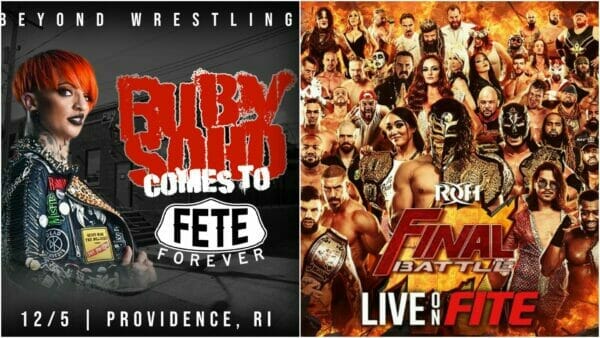 The Insiders Harry Broadhurst and Mark Radulich are back again and this time they present their ROH Final Battle/Beyond Wrestling Fete Forever 2021 Review! They also believe in Joe Hendry!

ROH Final Battle 2021 was a professional wrestling pay-per-view produced by American promotion Ring of Honor (ROH). It took place on December 11, 2021 at the Chesapeake Employers Insurance Arena in Baltimore, Maryland. The event was the 20th under the Final Battle chronology, and was billed as “The End of an Era”, as it was the last Ring of Honor event to be held before the company goes on a hiatus, expecting to resume operations in April 2022.

For the first time since Americanrana in 2016, Beyond returned to a PACKED Fete Music in Providence with a massive line-up! Ruby Soho, fresh off her appearances in AEW took on Alex Shelley for the IWTV Independent Wrestling World Championship!

Grammarly Ad: 36:00
Amazon Music Ad: 1:24:50
For a 30 Day Free Trial of head to Amazon Music Unlimited. Make sure you complete the sign up process. And we also have a special offer for Grammarly.