Location: Philadelphia, Pennsylvania inside the 2300 Arena 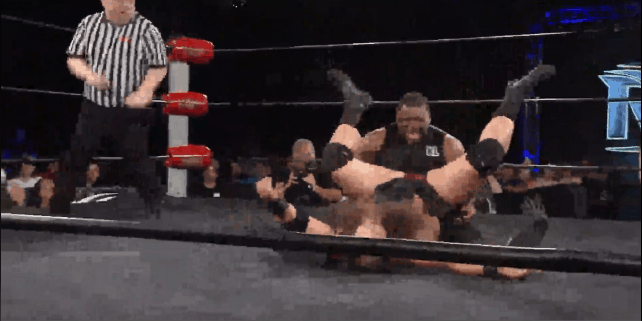 We finally get to see these two huge teams lock up for the first time in Ring of Honor! Keith Lee and Shane Taylor cost War Machine the tag team titles, and beat them up on multiple occasions. That’s the definition of a grudge match folks! They don’t waste any time in getting down to business either. All four men start by unloading huge punches on each other, and the match degrades into chaos from there. These four guys match up really well, and the freaky level of athleticism they all display will leave your jaws hanging. The two teams would trade several ring shaking double team maneuvers throughout the match. Freakin’ awesome match, with the nice shock value from the upset! *** and ¼ * 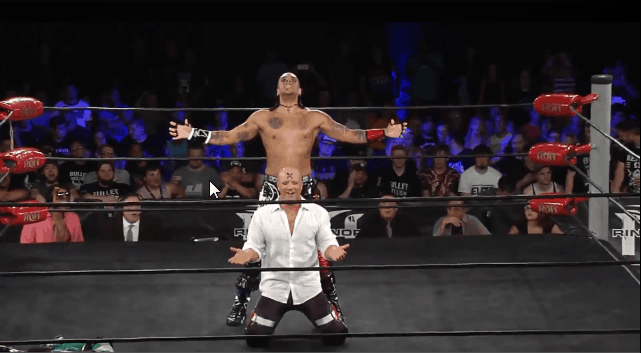 No Contest due to Interference from Punisher Martinez

Cheeseburger gets the only televised entrance for this one. The point of the match becomes apparent with the appearance of BJ Whitmer with his new cult figure look. He joins Kevin Kelly and Matt Taven for commentary. The match isn’t anything too impressive. Each person gets their brief moments to shine, before BJ announces that it’s time on commentary. The lights go out, and a video plays that has some footage from the one we saw last week. Suddenly, a person appears next to BJ in the video.

Once the video ends, that person has mysteriously appeared in the ring! It’s Punisher Martinez from the Top Prospect Tournament. The crowd goes mild, but once he starts beating everybody down, they’re sort of into it. Martinez leaves all four competitors in a heap. I’m not sure how to feel about this, but I do like that a new talent is getting some spotlight in this angle. ** 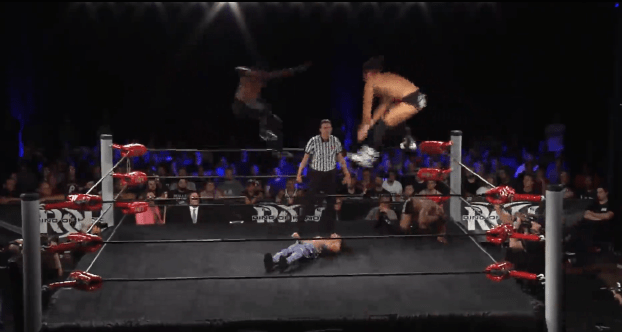 The Cabinet (Caprice Coleman, Kenny King, and Rhett Titus) vs. Dalton Castle and The Boys

Dalton and The Boys get a huge pop, and The Cabinet are just sort of tolerated. No big story here folks, this platform (pardon the pun) simply exists to let The Cabinet show off together. The Boys are surprisingly great. We don’t get to see them perform all that often, but when they do, they always impress. They fire off an impressive double maneuver at the beginning, and quickly tag in Dalton, who does most of the leg work for the match.

The Cabinet manage to isolate one of the Boys for a bit, but The Boys decide to pull the ol’ switch-a-roo with each other, which gets them back into the match. The beating from The Cabinet would prove to be too much for the unnamed Boy who takes the fall. He eats a superplex from Kenny, followed by a leg drop/big splash combination from Rhett & Caprice, which leads to the pinfall. ** and ½ *

You’re new ROH World Champion, Adam Cole (BAYBAY) gets some promo time to run down Kyle O’Reily. Adam says that he will now easily live up to the promise of making sure Kyle never wins the RoH World Title personally. 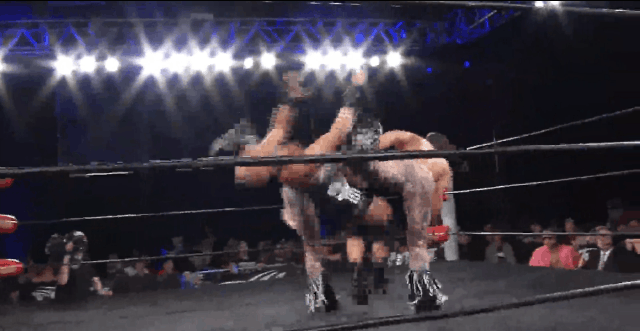 The Addiction defend against The Young Bucks

Veda Scott joins the commentary table for this one. As a quick aside, her and Taven play buddy-buddy. She could play a great part Matt Taven’s New Kingdom he keeps talking about me thinks. Anyway, The Addiction try to get the jump on the Young Bucks by meeting them on the ramp. The Young Bucks, however, show up behind them and nail them with a pair of superkicks! The match gets pretty wild, as they bring out a couple of tables and a ladder.

Ladder War anyone? Tons and tons of superkicks and double team maneuvers later, we get down to the finishing stretch. Kamaitachi comes out for the distraction, but he gets taken out by The Motor City Machine Guns. The brawl on the outside allows Kazarian to grab a chair, but Sabin comes in, and takes it from him. Sabin goes to hit Kazarian with it, but he ducks the blow. The chair crashes into Matt Jackson’s face, and Daniels gets the pin! *** and ¼ *

Overall Rating: 7 out of 10 We get a whole ton of progression on this show. Feuds progressed, the wrestling was solid, and I found that the hour flew by quickly. I’m all for more War Machine/Tayler & Lee matches, the one on this show was terrific. The Tag Title scene seems bound for a Ladder War after this episode, and while I haven’t a clue where the Legacy of Hatred story might go, they took a positive step forward in adding a new talent to the story.