Saban’s Mighty Morphin Power Rangers: Mega Battle (PRMB) is a side-scrolling multiplayer beat-em up game from Bandai Namco. PRMB plays on your nostalgia for Power Rangers and beat-em up games. Two things that I loved as a kid. I must have played hundreds of hours on classic beat-em up games like Teenage Mutant Ninja Turtles, Golden Axe, and Streets of Rage 2. The original Power Rangers TV series also holds a special place in my heart. It was the first show I was ever obsessed with. I feel as if this game was made for old school fans like me. PRMB exceeds expectations in many ways, but also disappoints at critical times. 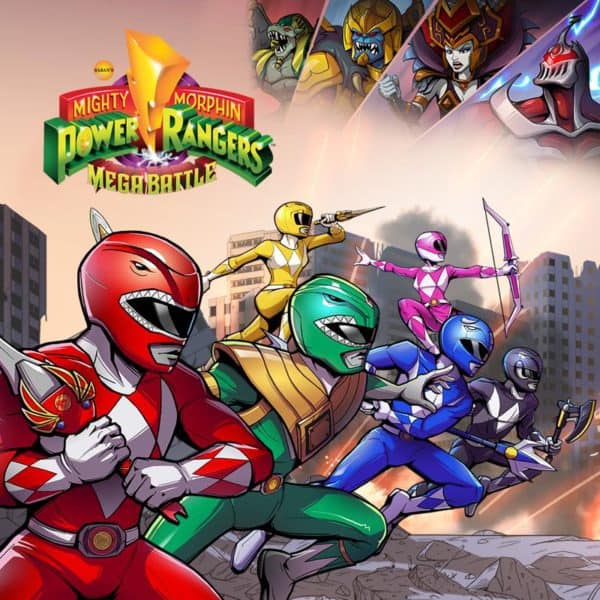 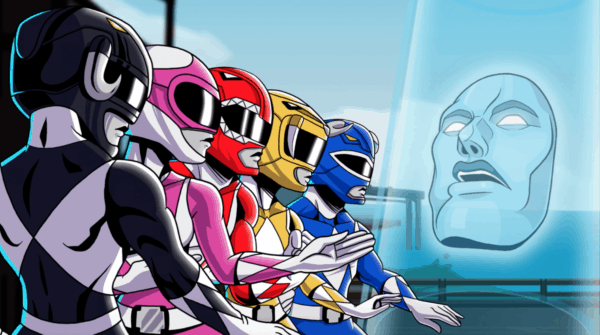 PRMB condenses the major storylines from first two seasons of the television show in a pretty coherent manner. There are six chapters broken into three levels. The game starts with Zordon giving five young teenagers the ability to transform into the Power Rangers. Using this ability, they are able to protect their town of Angel Grove, California from Rita Repulsa and her endless amount of monsters. Zordon also provides the Power Rangers with giant mech animals that combine together to form the Megazord. The story is presented in colorful cartoony pictures and static cut scenes. Although not spectacular, it fits the presentation. 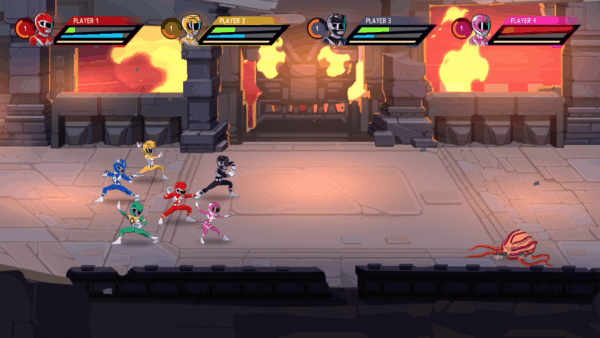 By the end of the game, you have the option to select six somewhat unique characters. The Red Ranger is the most well rounded of them all. He uses a sword, has decent range and good defense. The Black Ranger uses a battle axe, has the strongest laser gun. However, he has weak light attacks. The Blue Ranger is similar to the Black Ranger in build, but has a stronger defense and uses a battle staff.

The Pink Ranger has the longest range thanks to her bow. Except she has low defense and a weak laser gun. My favorite character to use was the Yellow Ranger. She is the fastest character so despite her low defense, I could dodge enemy attacks pretty easily. Near the middle of the game you can select the Green/White Ranger. He has a similar build to the Red Ranger, but has lower defense. 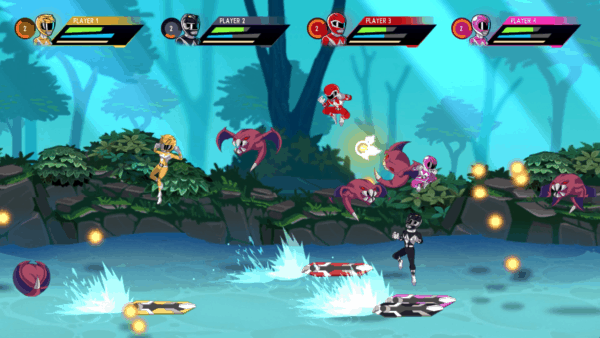 Beat-Em Ups in general are rather similar. It’s truly hard to distinguish them in terms of gameplay. There are slight variations, but for the most part they all have a simple control system. One button commands exist for light hit, strong hit, range, grabbing, block, and power up. There are 15+ different enemy types, not including bosses. Not to mention, three basic putty monsters that are used for cannon fodder.

The other enemy types bring unique abilities and skills, which require different strategies to beat. For example, there is a big knight where you jump kick to break his defense. A bull enemy that you roll around to avoid their special. Then, there’s a banshee type enemy that can only get hit when they teleport. This variety helps keep the gameplay from getting stale. When it comes to boss fights, although fun, they are a tad on the easy side.

One of the things that distinguishes PMRB, is it’s leveling system. It adds a nice meaty layer to the combat. There are 30 enhancements you can choose from for each character. These unlock things such as: health increases, new moves and new combos. My favorite enhancement, was the ability to call on all the rangers to create a massive blast that filled the whole screen. This attack requires you to get into “super” mode. This ability allows the character to execute faster more powerful attacks for a short period of time. Understanding when to use the “super” mode is important. Once again adding another level of complexity that I was not expecting from PMRB.

While the gameplay is fun, nostalgia is what sells this game. PRMB does a great job recreating the show. Admittedly, I forgot all of the major aspects of the show. So, this probably led to an even bigger feeling of my memories unlocking while playing PMRB. It made me snicker to see the teenage bullies Bulk and Skull appear. I laughed really hard when the Putty monsters made their iconic noises before attacking. I was ecstatic when the Green Ranger showed up to save the day. Plus, I can’t forget, jamming out when the power rangers theme song started playing. All these things helped bring me back to my youth. I couldn’t help but smile from ear to ear the whole time I was playing PRMB. 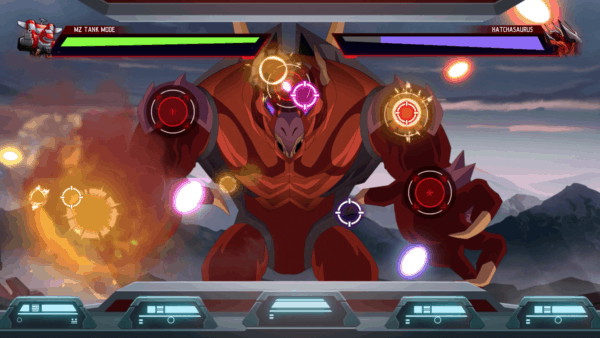 However, I did have a couple of major issues with the game. First, I did not like that when you die, you start over from the beginning of a level, without any check points. For instance, the first time I encountered the bulls, I kept dying. It was very frustrating to have to restart completely each time.

Second, experience is gained only by the current character being used. This means either you have to use the same character for the whole game, or constantly switch out characters throughout to make sure some of them are evenly leveled. The reason why many games level unused characters, is so that each one of them is available at a moment’s notice. Since the game is short, their idea is to create replays by pushing you towards using one character each time. Personally, I would have preferred to have more choice in my character selection. Also, due to the shortness, having online co-op may have helped add more value. 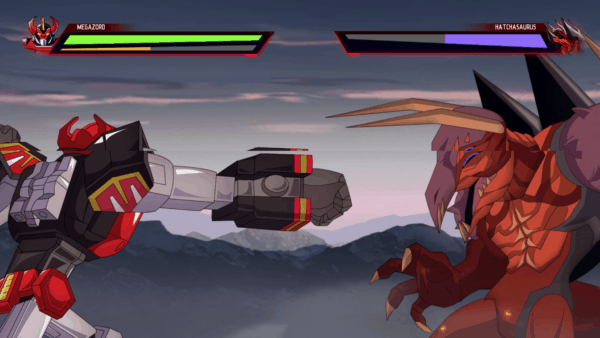 Finally, the biggest is the Megazord battles. They are highly disappointing. The battle is broken into two parts. In the first part, you transform into a battle tank. Then, fight the boss by shooting at key points with crosshairs. In the second part, you transform into the Megazord and it becomes a Quick-Time Event. Not getting to experience the feeling of using the Megazord is a huge bummer. It felt like a letdown when the button prompts appeared on screen. What’s even worse, is the prompt letters do not correlate with the Xbox One button scheme. Initially, I kept making the mistake of looking at the letters. This led to failing the QTE at least eight times in a row, until I figured out to look at the colors.

Overall Thoughts: 7 out of 10 I came into this game not expecting much from it. However, it left me with overall positive thoughts. I don’t understand why Bamtag chose to make the Megazord battles into a QTE. Especially since it should have been a major part of the game. Megazord battles are what many kids loved the most about Power Rangers. Other than that, this is a fun game. I never found myself bored with it either. Maybe I was on a nostalgia high, but honestly, perhaps that’s going to decide how much you enjoy this game. Bringing nostalgia and it’s short length into consideration, I still think this game is worth a shot.

* For the sake of transparency, the publisher did provide a digital code for review purposes. *