When I saw the trailer for Skul The Hero Slayer for the first time, I thought to myself, “Yep that’s totally for me.” I tend to like roguelikes, and I liked the idea that you are basically a bad guy trying to take down the hero that supposedly won. However, the more I played of it, the more frustrated I became. Skul is not a bad game at all, but the bar is set so high now with the Roguelike genre that even being decent isn’t quite good enough.

Skul The Hero Slayer: Not Enough To Keep Me Coming Back 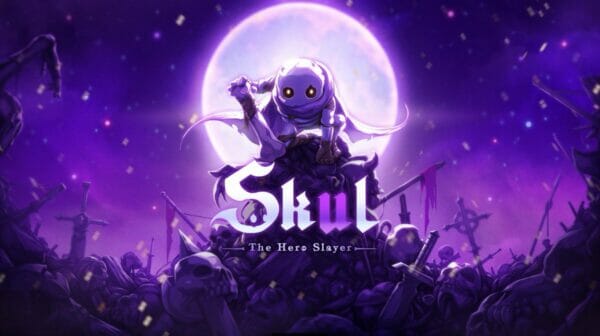 Skul: The Hero Slayer is a 2D Roguelike game in the vein of Dead Cells , Risk of Rain, Rogue Legacy and so on. You do runs of the game stages where you start off with nothing and try to become more and more powerful during a run. Once you are killed, you start off at zero and try the run again.  It’s pretty old-hat roguelike gameplay at this point.

For what it is, the story is actually kind of interesting. The Demon King is captured and the underworld is in disarray due to humanity and the main hero coming down and wrecking everything. You play as Skul a lowely skeleton soldier that manages to survive the assault. You are found by a demonic witch and then given the mission to ultimately rescue the Demon King. This story has shades of something like Disgaea but doesn’t go quite “You are the prince of the underworld.” It’s a cute enough little story though and keeps you somewhat invested in trying to complete the game.

The base gameplay of Skul: The Hero Slayer isn’t too special on a very cursory look. You have a basic attack with Square (X on an Xbox gamepad), jump is on X (A on Xbox) and dash is Circle (B). While it was on its way out anyway, my Xbox 360 Wired Gamepad finally decided to die when playing this game and would refuse to stay connected. Your abilities are on L2/R2 (LT/RT) while your Quintessence (think special pick-up ability) is on R1.  L1 is used to swap your skull.

Skull for the Skull Throne

Skul The Hero Slayer‘s big gameplay hook is that you can switch the skull on your body. You start off with the default skull which has a very basic attack and two special abilities. One involves throwing your skull at an enemy for damage and the other, teleports you to where your skull lands. Quite frankly, this is a very weak skull and you’ll quickly want to find a different one.

Fundamentally, skulls are character classes. There are basic ones like Skeleton-Sword, Werewolf, Petty Thief and so on. There are much more varied and interesting skulls that you can pick up later on too such as the Gambler or Champion that are vastly more powerful but are also a lot more complicated with their movesets and require you to figure them out quickly.

Like I said above, you can swap between skulls at any time. However, you can only carry two of them at once. So, it’s a good idea to pick two that might complement each other. For Example, having one that’s melee-focused and one that’s ranged focused. Swapping between equipped skulls can generate an effect, such as increasing your speed or doing an attack against enemies around you. So, mixing and matching to find the best combination is a possibility.

Also, you can elect to not pick up skulls you find and turn them into raw bones instead. After every mid or main boss, you’ll run across Arachne (a spider-lady) who can upgrade your current skull for bones instead. Most skulls you find are of the common variety, much like equippable gear in an action RPG. Occasionally though, you may find uncommon, unique, (rare in other games) and legendary skulls.

If you’d rather not do as much searching, you can also pay Arachne to upgrade your current skull to the next tier of rarity, up to legendary. She’ll typically require 10 bones the first time, 30 the next, and finally 100 for legendary. When you do upgrade a skull, you’ll unlock new active abilities, passive buffs, buffs for switching between skulls, and so on.

Unfortunately, the paid upgrade path is not very optimal, as you actually don’t get a ton of bones while playing through the game. The game features five level environments, the first being a forest. I routinely cleared that area (which has five stages) with about 10 bones, if I was lucky. Although You do occasionally find an NPC who gives you a few bones, the best way to get more bones is by recycling skulls you find. However, even that doesn’t get you the necessary amount of bones to do an upgrade.

I’ve beaten the game a few times, after amassing about 80 or 90 runs and I was only able to actually upgrade a common skull once or twice, partially due to me finding higher-tier skulls later in the game but more because I just never had enough bones to actually do it.

Your other currency in the game is Dark Quartz. This is the currency you receive for defeating enemies. You use this stuff to unlock passive upgrades with the witch before every run, so it is a currency that persists after death. For example, there’s “Increase basic attack”, “increase skill attack”, “increase HP” and so on, with many of them having multiple tiers and also more powerful abilities the higher up the tree you go. There’s nothing super game-breaking here but it increases your general survivability.

There also is another vendor you can unlock to spend Dark Quartz with, but that’s only after you beat the game. However, this is only a cosmetic vendor for fixing up the castle and nothing more.

You do collect gold in the game, which is spent at the shop levels you’ll run into every three stages or so. Here, you can buy food to heal yourself, Quintessence items (passive and active item), possibly a skull, and there are also three pieces of passive gear for you to purchase, or swap out if you have the money for it. You can only hold nine items at a time though, so you may have to do some swapping if you find something new to replace a current item.

Also, this area is pretty much the only rest area in the game. Outside of a very few specific items or blessings you really can’t heal in the game at all. Buying food from the demonic chef is just about the only chance you ever have to reliably heal.

Arguably the biggest problem with Skul The Hero Slayer is a lack of a replay factor. If you do manage to beat the game, you’re left with practically nothing to do. There are no secrets for you to find or hidden challenges for you to conquer, or any real reason to come back.

I don’t need some Hades-style “You need to complete the game 50 times in order to make it through the actual story” narrative but other roguelike games offer hidden bosses to fight or alternate paths, or something, to keep you invested. Skul has nothing or at least nothing I’ve really found. You don’t even get to see story cut-scenes again on your next run. You’ll replay Skul a lot to beat it but after that’s done, there’s nothing getting you to play it anymore.

Another example is the bosses, they are completely static. You’ll always face the evil giant Ent boss at the end of the forest and nothing about the battle changes, outside of the skulls you may have equipped. Now, in something like Binding of Isaac (which has a plethora of bosses) or Hades (where the bosses can change), re-doing runs over and over is fine. But when so much of the game world is the same, it just becomes tedious to do.

A lesser but almost equally important problem with Skul is how unbalanced some of the skulls are and how generally difficult the game is. Some of the skulls you get, Grim Reaper or Gambler (two legendary skulls) are completely overpowered compared to a common Carleon Recruit skull. Now, some of this is by design, a legendary skull should be more powerful than a common one, but even if you manage to boost the Recruit skull to legendary status, it still pales in comparison to either of the two (or really most other skulls) I previously mentioned.

Also, the game is brutally hard.  Like I said above, you can’t really heal in the game much. Enemies also tend to take a lot of damage, particularly bigger ones that can wreck you pretty quickly. You do get used to it eventually, but you never feel overwhelmingly powerful, even if you do manage to amass a collection of items and powerful skulls.

On a last positive note, I dug the general look and sounds of the game. It has kind of a deliberate 16-bit look, like Super Metroid and it works well.  I think the first two areas are best (Forest and Mansion) but it’s an overall nice look.

The music isn’t the best ever but it gets the job done well enough. Sound effects are fine but the limited voice acting works well. This game is South Korean and the few level cinematics has a South Korean woman narrating and she does a good job. At least it is much better than getting some non-union English voice actress to try to pull the lines off.

This game was reviewed using a digital code provided by the publisher.

If there was more meat on the bones, pardon the pun, I would’ve liked Skul The Hero Slayer a lot more. It really feels like a game that has a great hook but still needed more to flesh it out. The gameplay is fine and the skulls do add a lot to it, but once the journey is done and you get to the destination, it is all over. If roguelikes are your favorite genre you’ll still enjoy Skul but if you’re on the fence some, there are better examples to play first.