Canadian studio Vertex Pop are most well known for their hit Graceful Explosion Machine. Now they deliver a pastel-colored punch into the beat-em-up realm with Super Crush KO for Nintendo Switch and PC. Taking a 2D side-scroller and combining it with scoring elements and a cartoony story that also manages to grab a few laughs and perhaps a few tears as well. Put all of that together with action that never slows down and it creates a concoction that virtually anyone can enjoy. 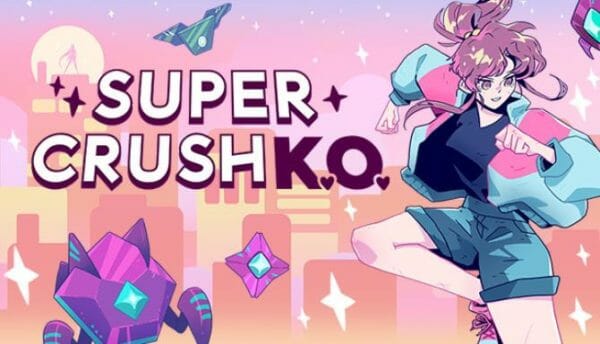 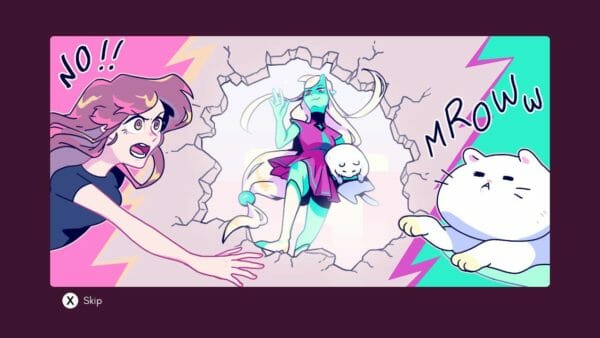 Karen is lounging at home, when suddenly a hole is punched through her wall and an alien named Ann takes her beloved cat Chubbz. Karen in return nabs the alien gun that Ann leaves behind, puts on her neon jacket, her tennis shoes, and takes off running in pursuit of her feline friend. As per usual with beat-em-ups, that’s the premise for why Karen smacks, kicks and blasts all types of robots in Super Crush KO.

The story plays out in five comic book style cutscenes that are stretched out over the game’s 20 levels. All of them are drawn superbly and contain some slight voice acting over the still images. Each boss battle also contains a bit of story as well, with some humorous dialog poking fun at the giant mecha’s simple naming convention for example. Although the story is expectedly light. There are some fun developments between Karen and Ann throughout the scenes, which even turn heartwarming by the end. 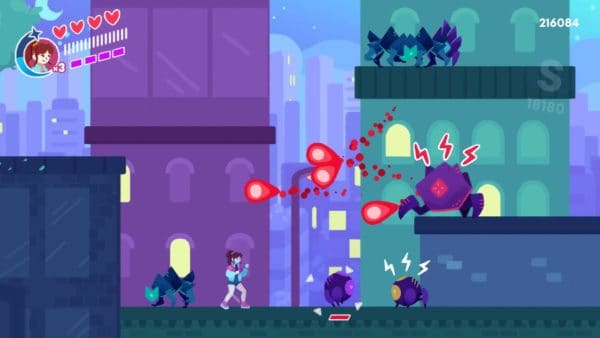 Beat-em-ups are largely judged on their brawling and Super Crush KO certainly delivers in that department. Karen has a basic punch combo performed with the Y button that knocks away and can even interrupt attacks from smaller bots. Learned attacks are performed with the X button and change depending on the control stick direction. For example, facing right or left may do a somersault kick. While pointing up leads to a cross-kick and looking down does a Donkey Kong style fist slam.

These moves are all tied to four purple squares at the top of the screen, which refills slowly over time or by gathering up purple orbs that drop from enemies. There’s also a high-speed dodge which makes Karen invulnerable for a few seconds. The dodge does have a short cooldown though, so be careful using it in a crowded area.

In combination with that is the laser gun that has its own meter that recharges quickly after about five seconds. Finally, Karen also has a special attack that shoots a huge laser that takes up a large chunk of the screen and has a much longer recharge. The big laser recharges by gathering up blue star orbs from enemies and you should be able to use it about twice per level.

Pizza is Good For You 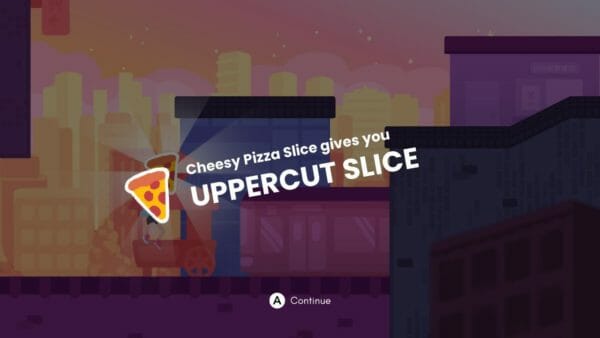 The learned skills are all obtained fairly quickly and by the end of the first set of levels, you have Karen’s full arsenal of maneuvers available. Even though the skills are small in number, they each have their distinct necessity. For instance, the Smash attack is great for getting bigger bots off balance making them easier to launch into the air. While the somersault kick is perfect for wiping out a bunch of enemies at once. However, what matters in Super Crush KO is how you use everything at your disposal. Taking out as many robots as fast as possible is the true goal.

Combo Your Heart Out 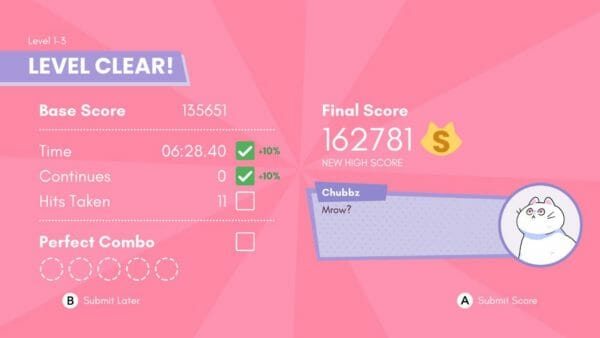 Although it is not a requirement for completing a level, Super Crush KO thrives on a combo scoring system. In the upper right corner of the screen is a letter grade that goes from D to S depending on how well you are keeping a combo going. This is why you learn all of Karen’s skills super early so that the rest of your time is spent understanding how each move can work together to help keep said combo. This is especially true for the laser gun as it can serve as a last-ditch move when you run out of abilities.

Thankfully, the actual moment to moment fighting is incredibly fluid and fun. There’s not really any slowdown with multiple enemies on screen. You can easily switch directions on the control stick and the moves change quickly. I did run into an issue with the Somersault Kick performing twice, even if I only hit X once. Although perhaps there is some user error there. Ultimately, it didn’t take much away from the joyous fighting. Making me want to actually explore keeping a combo and trying to keep an S rank. 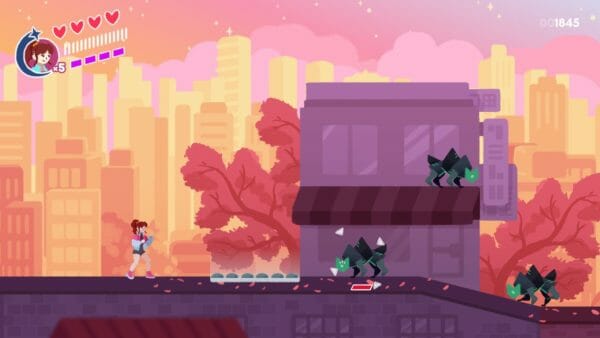 Furthermore, each level also features around three sections where Karen is bombarded by robot hordes and these are vital to receiving an S grade at each level’s end screen. During these pre-determined battles, Karen must dispatch robots swiftly and without receiving any damage or much stalling. Since the letter grade drops automatically if Karen gets hit or if you go too long without hitting an enemy.

Overall, I felt that the timing window was fine, but it drops very quickly and although it does carry over when it switches to the next area if an enemy isn’t immediately present right in front of you, keeping the combo for the entire level is extremely difficult. So those score chasers out there may have a tough time placing high on those leaderboards.

Color Me Pink And Blue 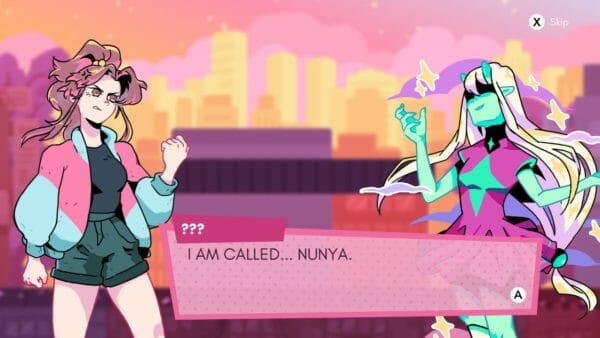 Sadly, there isn’t too much to marvel at aside from the multitude of mechas. The backgrounds are neat pastels with wonderful hues that match the aesthetic of its environments perfectly. It’s just they are rather similar. Basically, throughout the four areas, which span four levels and a boss battle each, the cityscape just grows increasingly darker as it goes from mid-day to night time.

In contrast, although the robots all favor certain animals, they are distinct. For example, there are basic dog type robots, but as you proceed through the areas a larger dog type appears that has a ferocious charge attack. Not to mention, flying bat types, rabbits that explode, a hedgehog that barrels into everything, large elephants that have a homing attack, and more. Each provides its own challenge and many have certain skills that work best against them. So this also makes each one of the learned skills valuable in progressing through the game.

Giants Are Also Short on Time

Unfortunately, the same cannot be said for the giant mecha bosses. Yes, you could make the case that Vertex Pop is going with the joke, but it wouldn’t stand out so much if the giant robots move-sets deviated a bit more. Whereas the crowded areas full of different robot types make for a spectacle, the Giant bosses are cool, but they are also super easy outs by comparison. The movement patterns are simple and using the laser gun can spell destruction for them in no time.

Personally, I feel the bosses just match the entire experience. Super Crush KO itself isn’t difficult at all. The challenge lies solely in maintaining the combo grade throughout a level and then trying to get the highest score on leaderboards. Although phasing floors, spikes, and other obstacles become more present as you progress, I faced little resistance in my three-hour playthrough.

Super Crush KO is an absolute blast that leaves you wanting more, with combat that is super fluid and always a constant in all aspects. I very much appreciated that Vertex Pop made the scoring system totally optional. Thus allowing players to complete the game however they see fit. Although I was never obligated to push for a certain letter grade, the game charmed me into caring about it. And even though its main quest is on the short side, what’s there is fun, funny, and certainly worth playing. Now that Vertex Pop has nailed the brawler genre, its exciting to think about what they’ll try to get into with their next game.

This game was reviewed using a digital code provided by the PR team (Plan of Attack).