Super Meat Boy released in 2010 and was one of the darlings of the early Xbox Live Arcade days. Receiving critical acclaim and selling nearly 150 thousand units by the end of 2010. Then, once it released on PC, Team Meat saw even greater success as they announced that the game had surpassed 1 million copies sold by the beginning of 2012. However, it was not until 2015 when the game released on PlayStation 4 that I finally got my hands on it. And once I started, I could not stop playing it. Unfortunately, Super Meat Boy Forever does not bring me quite the same joy for a variety of reasons. 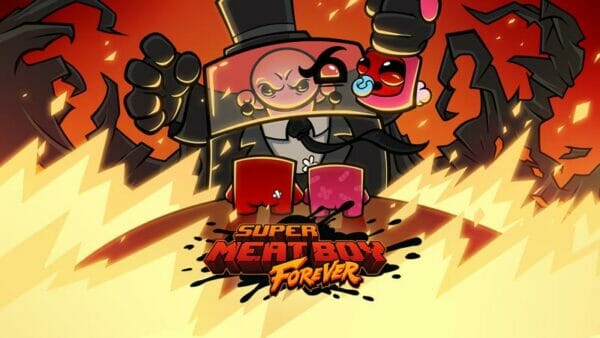 Just in case there are those jumping in for the first time here, Super Meat Boy asks you to be precise in every jump and find gaps in some of the most visually confusing puzzles. This challenge was one I could not resist. However, what made this self-punishment of watching your little Meat Boy die hundreds of times palatable is its fast reload time. If there were a long load screen after each death, it would damper the replayability immensely. When you aren’t dying, there are also tons of secret bandages to find or hidden warp zones that would change the visual design in the level to keep things fresh. Plus, Team Meat even added the ability to play as characters from other indie titles which was also a nice touch. Honestly, Super Meat Boy was the perfect challenge for fans of platformers.

A Bit of Background

First announced in 2014, Team Meat revealed they were working on a new title, Super Meat Boy Forever. The game was going to be a one-button auto-runner for mobile phones. In an interview with Kotaku’s Nathan Grayson, Super Meat Boy designer Tommy Refenes said that Super Meat Boy Forever was going to be a “palate cleanser” ahead of a bigger project.  Unfortunately, a few years went by and there was little word about the new title. Things got worse when Edmund McMillen left the team and went off to focus on Binding of Isaac.

At that point, Super Meat Boy Forever went through a few different changes, as it went from a one-button auto-runner on mobile to a two-button auto-runner on consoles. Thousands of levels and a crazy amount of hand-animated cutscenes were created in anticipation that Super Meat Boy Forever would be this giant return for the franchise. Unfortunately, things did not work out.  A release date was missed and suddenly this only begot more silence. In the end, a lot of content ended up being cut from the project as a result.

Team Meat stuck with the auto-runner idea for Super Meat Boy Forever. Sadly, that decision is a major reason for my disappointment with this game. As I mentioned earlier, Super Meat Boy is about precision jumping and waiting for the exact moment to attempt a hard jump.  Now death is all the more imminent, as Meat Boy is constantly on the move. So, instead of standing there looking at a few dozen saw blades, and then noticing the pattern so you can find the opening, the gameplay conceit is more of a trial and error. Giving you the sense of needing to die a few times before you can see what the difficult part of a given level requires. On the flip side, the auto-running does ramp up the intensity and the faster pace can lead to some very tense moments.

Aside from the auto-running, the other major change to the Meat Boy formula is that every level is procedurally generated. This creates unimaginable replayability, but it also takes away the polished touch that I loved in the original. There is just something off about several moments in my playthrough, where some levels would have obstacles that felt extremely out of place.  It also hindered the progression of difficulty that’s in the original Meat Boy game as well. So instead, the procedural generation creates a weird imbalance where early levels could be far more punishing than a level 15 world that you play down the line. In addition, the time-trial elements, which also appeared in the first game, are even more frustrating due to these changes.

An Overall Lack of Substance

Graphically, Super Meat Boy Forever does look a lot brighter and crisper, which helps create a much better field of vision when going through the levels. However, it also shows off some of the flaws when the levels don’t fit together as well as you would hope.

Overall, levels do feel much larger than in the original, to counter that, the game has included checkpoints in each level. And while it is nice to see levels last longer than 15-20 seconds, they just seem out of place compared to what Super Meat Boy offered. Gone are the days of working through an entire level, getting better and better at the opening section as you continue to push towards figuring out the back end. Instead, I found myself completely forgetting the front half of a level thanks to the checkpoints. This was especially true if the second half of a level gave me issues. Making replaying a level to attempt the time trial a frustrating task of relearning something I had done before, instead of finishing a level and then continuing to replay it while everything was fresh in my mind.

And while the size of the levels might have increased, the overall size of the game has not. There are extra cutscenes that are played between worlds, but there are still only a handful of worlds included. To be fair, there are at least several more challenging levels, dark worlds, and warp zones included for the more skilled players, but even those additions seem lacking in substance.

Quite frankly, Super Meat Boy Forever feels like a game that took 10 years of ideas and just tried to mash as much of them together without a lot of rhyme or reason. For example, there are now multiple power-ups and level effects that are thrown throughout many of the levels. Honestly, there are just far too many and by the end of the game, you are literally learning a new ability in every level. Although The powerups are varied, such as one that changes the direction in which Meat Boy runs, or another that grants Meat Boy a strong punch that can smash through walls. The levels ultimately feel like a distraction to keep your mind from thinking about how insipid they are.

Thankfully, Super Meat Boy does reward you with some terrific boss battles at the end of each world. These boss battles are easily the highlight of Super Meat Boy Forever, which is also probably because they are the only levels that hold onto the old Meat Boy formula in featuring no checkpoints and no changes between different playthroughs. Subsequently, these are also the levels that counted towards the majority of my deaths. Especially the last two to three bosses because they featured multiple aspects to learn and asked you to focus on several pinpoints during the fight. Although I died quite a bit, the boss battles are so good that they just made me even more frustrated about the rest of the game, because this is what I really wanted from a Meat Boy sequel.

More than anything, Super Meat Boy Forever shows that coming up with ideas for 10 years can be fruitful, but it can also create chaos. Keeping the mobile game inspired auto-run gameplay made the game extremely frustrating and I hope Team Meat considers removing it entirely if there’s another sequel down the line. Combine that with the procedurally generated levels that pale in comparison to the lovingly handcrafted environments of the first title, and it all just leaves a sour taste in your mouth. There’s still some decent enjoyment inside Super Meat Boy Forever, but without the soul of the original game, and that just makes me feel utter disappointment after such a long wait.