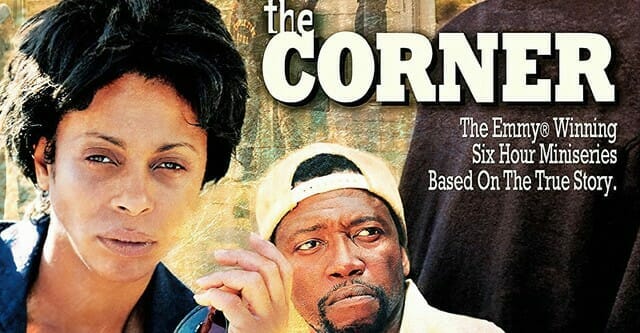 Jesse Starcher and Mark Radulich present their The Corner 2000 Miniseries Review! The Corner is a 2000 HBO drama television miniseries based on the nonfiction book The Corner: A Year in the Life of an Inner-City Neighborhood (1997) by David Simon and Ed Burns, and adapted for television by David Simon and David Mills. It premiered on HBO in the United States on April 16, 2000 and concluded its six-part run on May 21, 2000. The series was released on DVD on July 22, 2003. It won the Primetime Emmy Award for Outstanding Miniseries in 2000.

The Corner chronicles the life of a family living in poverty amid the open-air drug markets of West Baltimore. “The corner” is the junction of West Fayette Street and North Monroe Street (U.S. Route 1).

From The Corner to The Deuce: The Great Works of David Simon The Corner 2000 Miniseries Review