I first played The Legend of Zelda: Link’s Awakening around when it first released on the Gameboy. Since then, it has been re-released on various consoles in both physical and digital formats. However, none of those releases compare to its current HD Remake version for the Nintendo Switch.

Honestly, I put this on the same level as Capcom‘s effort on the Resident Evil 2 remake or what Square-Enix is currently doing with their Final Fantasy VII remake. Although, this remake doesn’t really add anything new to the game itself.  Keeping the core gameplay intact, while only adding a few small changes and an extra optional mode. So, you’ll see the same bosses, characters, dungeon layouts, and mini-games, just with a totally different art style instead. 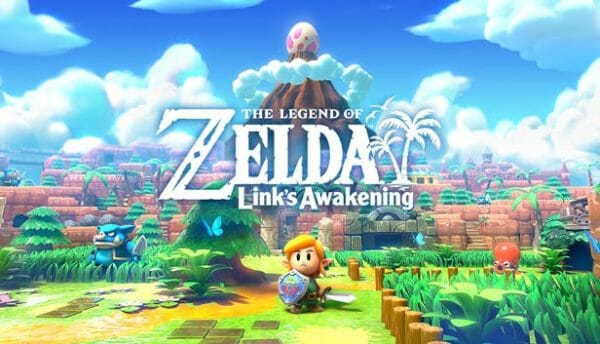 The Legend of (Not) Zelda 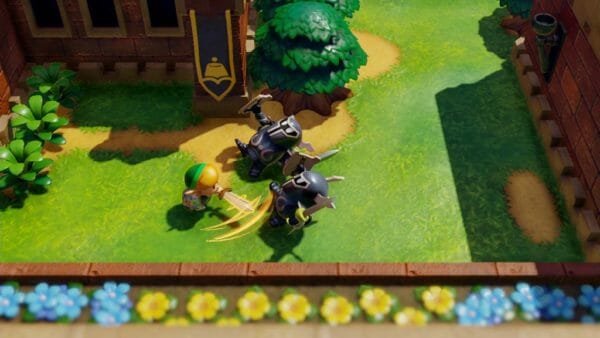 Link’s Awakening is different from most, if not all, Legend of Zelda games because it has very little to do with the usual canon.  There is a brief mention of Zelda, and a boss fight that is reminiscent of a Link to the Past fight, but that is about it.

In this adventure, Link washes up on the shores of Koholint Island.  He is taken in by Marin and her father, Tarin, and is tasked with trying to wake up the mysterious Wind Fish that is trapped in an egg on the island.  To do so, he needs to gather eight powerful instruments that are being held by nightmare creatures inside some dungeons. Using his trusty shield and sword, Link ventures off to try and wake up the fish.  So, this certainly isn’t the usual “rescue Zelda from Ganondorf” fare. 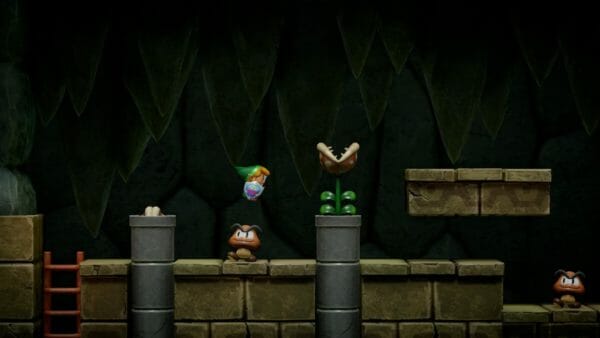 The original version was somewhat limited by the Gameboy control scheme.  You had a D-Pad and two buttons. This is also a major reason why Link’s Awakening was chosen as the game that launched with the Nintendo Switch Lite since it includes a D-Pad as well. Plus, you also had to juggle your inventory (sword and shield included) on just these two buttons.  For example, if you wanted both those items equipped, you couldn’t grab stones or dash with the boot.  Thankfully, this remastered version changes that.

In the Switch version, four of Link’s original actions are mapped to the controller.  You swing with B, pick up items with A, use his shield with R, and dash with the L button.  As you might imagine, this is immensely useful and is way more in-line with a traditional Zelda title than the original game.

There is still a healthy amount of inventory management, just not nearly as much as the old version. So, swapping between the Hookshot, Magic Rod, or Roc’s Feather still happens using the X & Y buttons. However, Link’s sword and shield don’t count as items. Thus, bringing forth a much welcome change to the game.

Most of the items in Link’s Awakening conform to other Zelda games. The Hookshot works as expected, so does the Boomerang or the Dash Boots. However, there are two items that do need a little explaining though.

The first and most notable one is the Roc’s Feather.  This feather lets you jump over one (or two, if you’re good) holes in the ground.  You can use it to get to new areas or dodge enemy attacks.

The other notable item in the game is the Magic Rod. This lets you attack enemies from afar with magical power. It also lights torches on fire and can melt ice too. The rod has certainly existed in other Zelda games but for newer players to the franchise, its uses aren’t as well known.

This version of the game also has some helpful bottles (which the original didn’t have) to capture fairies and use them whenever necessary. 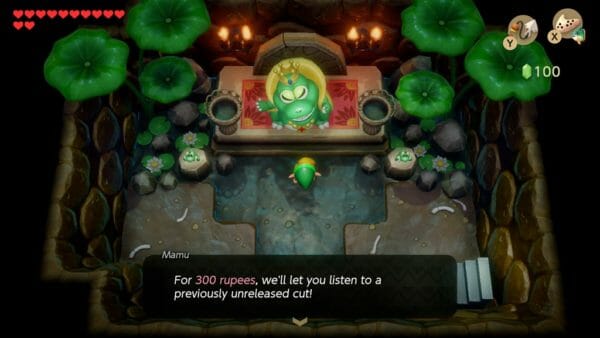 Link’s Awakening is a traditional Zelda game of its era. It follows the simple formula of entering a dungeon, finding the compass, map, and Owl’s Beak (which lets you talk to stone owls in the dungeon to get hints), find the dungeon item and use said item in the dungeon to kill the boss. For completing these tasks, you get a new heart piece and one of the instruments of power.

However, one weird thing which descended from its predecessor is the inclusion of 2D screens in dungeons.  Occasionally, you’ll go down a flight of stairs and go into a 2D cave of the dungeon area. Typically, you use a ladder to get out, but you can really only move it left or right while going up and down only during certain parts. This isn’t a huge change from the original but it is worth pointing out.

As previously mentioned, mini-games make their return and many of them are pretty fun. The fishing mini-game lets you get new heart pieces and a bottle.  There is a crane game for nabbing new items and rupees.  Finally, there is also a fairly involved trading mini-game that you have to actually accomplish some of to progress the story.  It’s fairly easy in spots but can be vexing in others.  It usually involves things like “OK, I have bananas and this monkey wants them.  He eats them and drops a stick.  Now, who wants the stick?”

There are a few other things to do in the game.  Collecting the usual heart pieces is still around. Also, collecting Secret Seashells for a few permanent upgrades is a nice touch too. In all, there are 50 of these seashells (up from the old game’s 26), and can be found by digging around, completing mini-games, looking in treasure chests, or even by picking up rocks.

There is one major issue with the game and that involves the framerate being fairly erratic.  Others have done more comprehensive testing but certain screen transitions can tank the framerate for a few seconds. Especially, when going in and out of the forest area.  It isn’t the biggest issue in the game but it is probably the most noticeable.

on a personal note, I did take some issue with the price for Link’s Awakening.  This is a full-priced ($60) game and can be a tad short, especially for those that have played through it before.  That’s not to say you could beat the game in two hours, but in total, it took me about 10 hours to get through the story portion without finding every secret item.

I do wish they had also included another game as a package like maybe A Link Between Worlds or The Minish Cap, but it does not take anything away from what the development team did to remake this classic game.

Oh Why, Oh Why is this here? (Link’s Awakening Dungeon Creator) 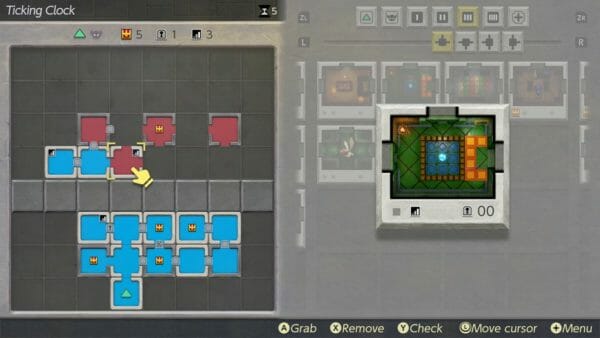 As you progress through the various dungeons in the story, they become unlockable for use as rooms and new areas for the dungeon creator. Dampe tasks you with making complete dungeons. Including the entrance, the exit, and everything in-between. These dungeons also have some requirements. For example, one dungeon may need a locked door or another dungeon may need a connecting stairway. Forcing you to find the right pieces to meet these requirements.

The pieces themselves come in four different types: one way, two way, three way (think of a T configuration) and four way.  Certain ones have treasure chests, or stairs, or even locked doors.  The goal is to run through each dungeon, collect every chest, (because the boss key only shows up in the last chest,) and kill the boss.

You can’t really control the shape of a room, so for a two way room, it has the traditional up and down, left and right directions, but it also has rooms like up and left, down and left, up and right, etc.  This is the same for the three exit and four exit rooms as well.  I’m sure there are guides online on how to most efficiently build a dungeon to get Dampe’s rewards, but it is really just a frustratingly boring mess most of the time. And although it isn’t unexpected, not being able to share your dungeon creations in a traditional way (such as uploading them online) is very lame.

I really enjoyed my time with this remake version of Link’s Awakening but I realize it might not be for everyone.  If you thought Breath of the Wild was the best Zelda game ever, stay far, FAR away from this one.  It is an extremely conventional Legend of Zelda game in some great ways but also in a few ways that may frustrate some new fans.  If you have any nostalgia for the old game, then I’d totally recommend buying it at once, and even more so, if it slips to $40 during Black Friday.