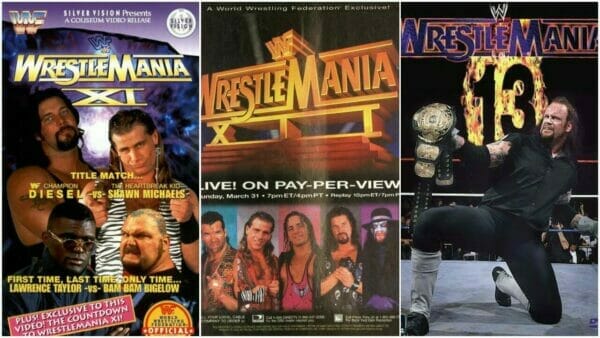 Pat Mullin and Mark Radulich present their continued look at the history of WrestleMania; The Mania of Wrestlemania 11 12 and 13!

On this episode we’re chronicling the end of The New Generation and the birth of the Attitude Era! With business down in 1992 because of bad press from the steroid scandal, Vince McMahon began pushing younger talents into the spotlight over the next several years. By mid-1993, Bret “Hit Man” Hart, Shawn Michaels, The Undertaker, Razor Ramon, Diesel, Lex Luger, Yokozuna, Owen Hart, Crush, Tatanka and others all became the stars of what the WWF eventually branded as the “New Generation”.

Over the course of WrestleMania 11, 12 and 13 we would see the rise of Kevin “Diesel” Nash as WWF champion as well as HBK Shawn Michaels ascend into the main event scene. Eventually he would live out his “boyhood” and become WWF Champion. By WrestleMania 13 things were starting to change, real life rivalries were mirroring the scripted ones and the “HEAT” was on!

In 1994, WCW signed Hulk Hogan and other former WWF stars to multi-year contracts, and in 1995 launched Monday Nitro on TNT, to go head to head with Raw, starting the Monday Night Wars. This era would also see both companies launch monthly PPV events instead of quarterly or seasonal ones with the advent of In Your House.

By mid-1996, with the introduction of the New World Order (nWo), a stable led by former WWF wrestlers Hulk Hogan, Scott Hall (Razor Ramon), and Kevin Nash (Diesel), Nitro started a near two years of ratings domination. Meanwhile, Shawn Michaels would struggle as a babyface champion, eventually turning into more of a “degenerate” character. We would also see the rise of Stone Cold Steve Austin!