From the very first moment I saw it, I wanted to play The Solitaire Conspiracy. It frankly just looks rad. Using tons of black, neon-lighted cards and is just an interesting spin on solitaire. Although it is a tad short, it is a really good game. 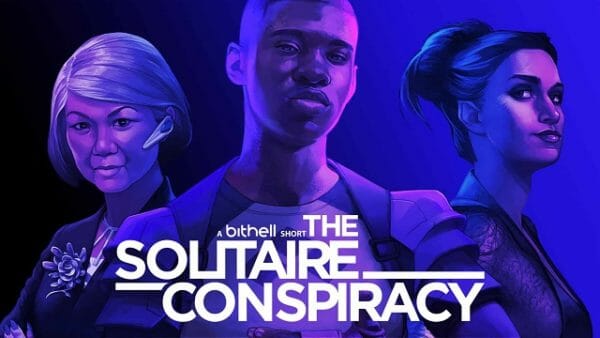 The Solitaire Conspiracy is an odd game to try and explain. It’s Solitaire-like, but it also isn’t. I honestly thought it would be comparable to something like Regency Solitaire, or any number of other Solitaire-based games. And while it shares some DNA with those games, it’s also something distinctly different. 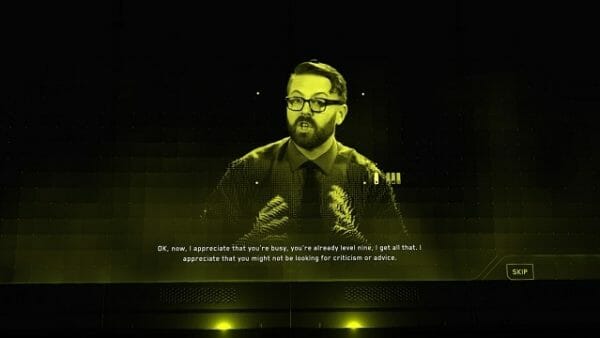 When you first boot up The Solitaire Conspiracy and select a new game, you are contacted by Jim Ratio (played by Greg Miller) of a group called Protego. Jim is their spymaster. However, the dastardly terrorist known as Solitaire has broken the Protego’s control over its agents. He picks you to try and rank up high enough in the system architecture to unlock his access and so you can finally take on Solitaire’s organization. You do this by playing Solitaire of course, like in all life-and-death spy struggles.

As a premise, this is all in-line with what you might expect from other Cyberpunk games. There are various organizational teams you unlock and some twists and turns with the story.  It’s a tad goofy but it actually kind of adds to the charm of the game. 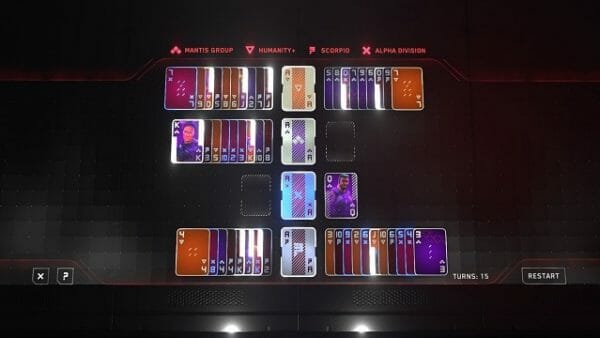 How you play the game is odd, but it does get normal after a bit. Basically, there is a middle column of four card slots on the board. On each side of the main column is another column of cards. This is where the “play” cards are shuffled into. The main goal of the game is to put cards, from the sides of the main column, into the middle column, going from A-2-3-4-5-6-7-8-9-10-J-Q-K, all in the same suit.

The thing is, this sounds much easier than it actually is. It even becomes much harder with the “all in the same suit” part. The only cards that can be slotted into the middle column are the cards that are in the progressive sequence. So only Aces may be put there first, then 2’s, 3’s, and so on. In this respect, it is very much like traditional Solitaire.

Not Your Dad’s Solitaire

Let’s go back to my example though, with the 4 gone, you may have an empty spot on the board.  With this empty spot, you can put any card you want into it, regardless of value.

Your Company is a Suit 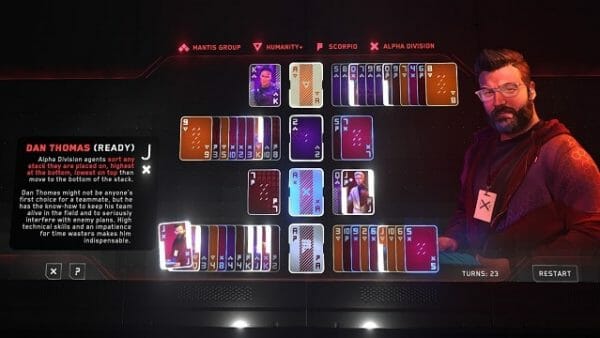 This is all well and good for one suit, but there can be up to four suits in play at a time. You’ll need to build the traditional A-K pattern with four different colored suits, which is a bit more challenging than just one suit.

Also, the different suits are the different cyberpunk mercenary companies you deal with within the game when taking on jobs. They all have slightly different abilities that once activated, you can use as well. You basically drag a lit-up card onto a pile and that activates the company’s power. These range from exploding a pile (distributing cards to other piles), shuffling the cards in a given pile, and even sorting cards from the lowest value on top to the highest value on the bottom (or vice versa). There are other more esoteric powers too. However, not every power is useful, and in fact, some have the capacity to mess up your board. But at least they all have specific edge-cases where they can still be good.

I’ll be honest, there really is only one problem with The Solitaire Conspiracy and that is its length. I beat both Jewel Match Twilight Solitaire and Jewel Match Solitaire Winterscapes in about 12 hours each. I beat The Solitaire Conspiracy in under 3 hours, and that was even restarting some of the later levels to gain a slightly better starting board, or if I got stuck. The story is actually really interesting but it ends on an extremely abrupt note that left me wanting more.

There are two additional modes in the game for you to play but they are a bit slim. One is basically a pick your suits and play mode. The other is a wave/survival-based mode where there is a ticking clock and you have to keep putting cards in the middle column to get more time back. After you win a round the board changes, making it more difficult. You can compare how long you survived against a global leaderboard or against your friends. 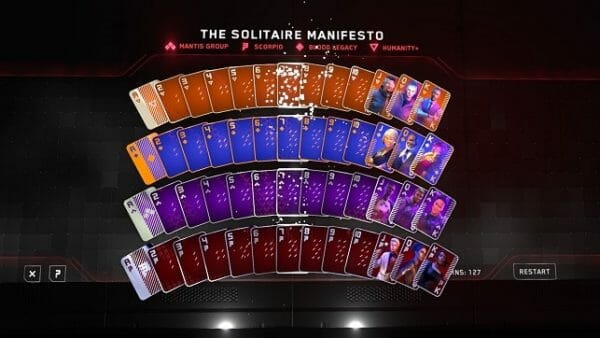 It’s obviously simple, but my GOD does this game look rad. I think it’s somewhat of a 3D game, which might be the first for a Solitaire-like game. When the cards are shuffled at the beginning of a round, it has this great cinematic look to it. Every Jack, Queen, and King card has a drawn figure with even a bit of backstory about them, which is a nice touch. You can also change the look of the overall game on the main menu with a variety of different colored themes. These even apply to the full-motion video sequences with the other characters in the game, which is a very nice touch as well.

The music is also great. While you can buy the soundtrack on other platforms (Amazon, iTunes, etc.), I’d like it if it also came to Steam. I’d also love owning a CD version of it. It fits into the niche of cyberpunk/synthwave music perfectly. I would say that the visuals/music alone makes this a worthy purchase.

This game was reviewed using a digital code provided by the publisher (Bithell Games).

It’s short but I loved this game.  It’s inventive and creative but not without a few flaws.  The biggest being, like I’ve said, it’s length.  I actually wish this thing could be bolted into Cyberpunk 2077 since it would fit that aesthetic so well as some type of mini-game.  If you have any interest in either solitaire or futuristic looking games, this is a very easy purchase.