Let’s be real here, the last 14 years of the Tony Hawk franchise have not been kind.  The only reason I’m not counting back even further is that I believe Tony Hawk’s Project 8 (2006) was the last legitimately good Tony Hawk game.  More so because it was competently made, than for being a standout title. Since then, it has been a myriad of not so spectacular games that varied widely in quality. From a mediocre HD collection to utter messes like Tony Hawk’s Pro Skater 5. Thankfully, these remakes of Tony Hawk’s Pro Skater 1 + 2 restore some shine back to the series. 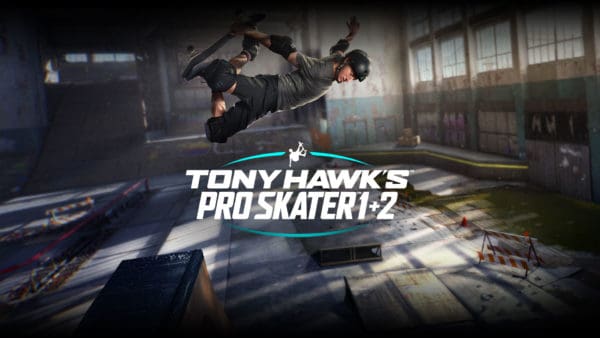 1+2 is an almost completely faithful remake of the first two Tony Hawk’s Pro Skater games. The level designs are completely the same. Level goals are the same. And even the original cast comes back along with some current skaters. Surprisingly, even most of the soundtrack is back too.

Tony Hawk’s Pro Skater 1 + 2 are skateboarding games with a bent towards arcade-style physics. You are given two minutes for a run with nine goals to finish in each level. Some of these goals are generic such as getting high scores, finding SKATE letters, or finding a Hidden Tape. That’s a VHS tape, for you youngsters out there). However, every stage also has level-specific goals for you to do. Although, these are a tad generic as well. They usually involve you finding five objects, grinding a certain rail, or doing a trick over a gap, etc.

For both new and returning players, the controls are the same as the original games. Ollie is X, flip tricks are square, grab tricks are on Circle and you grind rails/do lip tricks with Triangle. L1 and R1 are for turning left and right in the air, and L2/R2 are used to do Reverts and trick modifiers.

The game’s controls are great, and it is about 99% the same as before. The only thing that I think was slightly changed is possibly the holding up on the D-pad to go slightly faster.  But, at this point, I’m not sure when they actually introduced that, so if it wasn’t in the original Tony Hawk’s Pro Skater 1 and 2, I apologize.

From a control perspective though, this game is more analogous to Tony Hawk Pro Skater 3, or even Tony Hawk’s Pro Skater 4. For one, the Revert that’s included here functions more like it did in the later games. Letting you connect pipe tricks together, so you can transition into something else. I think the Wall Plant, which was from THPS 4, where you can kick off from a wall and keep a combo going, is also included.

There are options to either have THPS 1 or THPS 2 moves enabled. Although, playing with the default controls on feels great and lets you rack up some big point combos.

Like I said above, all the original levels and goals from the first two games are included. So, if you remember how to get up to the roof and can “Kickflip TC’s Roof Gap”, which is an actual goal in a level, it’s still there.

This works as a bit of a double-edged sword though. I think new players might be frustrated with certain aspects of the game, such as the restrictive time limit or some goals being left unexplained, outside of a 4-second long video showing you what it might be.

It’s not that the game has aged badly but some of this stuff is slightly archaic, that’s why they got rid of it with later Tony Hawk games.  Honestly, this doesn’t really mean a lot considering the true issue with the game.

The true issue with the game is the challenge system. By itself, it’s kind of innocuous, you have an overall player level system and you can complete a variety of challenges to gain more levels and more money to buy customization options for your skater or their skateboard.

Problem is, it’s really poorly implemented. For one, every skater has 21 challenges that can be completed. There are 21 skaters here and multiplying that by 21 means there are 441 challenges for you to get. A lot of these are fairly what you’d expect, “Get a sick score” or “Land a combo above 100,000 points on any classic park.” However, some of them are very specific. Good luck hitting the “Land the Hurricane, Kickflip So Good, Kickflip Superman and Madonna Tailslide in a single combo” challenge.

More than that though, there’s no real way to highlight these in the game. You can track them in the main menu, but it would have been really nice if you could track a challenge as you play a level.

Also, there are other specific challenges but the system is somewhat convoluted. You have challenges for Multiplayer, such as doing 100,000 Grab tricks, getting all the Gaps in a level, and so on. But then you’ll have a challenge like “complete every challenge in the Veteran Collection to earn the Veteran Badge.” But it doesn’t actually tell you what you need to do.

To its credit, the multiplayer works fine.  There is no lag or weirdness when you play, it just feels like you’re playing the game with 7 other players.

The issue is, you don’t have any real control over what you want to do. You just launch into multiplayer and it starts you off on a random level with people and it’ll start off with a random mode. After the round is done, it’ll wait about 10 or 15 seconds then launch into another mode.

Near as I can tell, there’s no real way to vote for a new game mode or to change levels. Let’s say you want to play H-O-R-S-E, you’ll have to wait until it comes up into the rotation, in order to play it. If you don’t like the School 2 level, you’ll have to bounce out of the multiplayer match, load into a new lobby, and hope for the best.

I imagine they don’t want to give full control over to players. Otherwise, they would probably just want to play Graffiti all the time or only play the Roswell map, but there has to be a happier medium than just “Only one map is played per lobby and some random game modes.”

Here are a few, completely crazy nitpicks I had with the game that will only matter to the most hardcore of Tony Hawk’s Pro Skater 1 + 2 fans:

This game was reviewed using a digital code provided by the publisher, Activision.

It’s weird to say in 2020 that Tony Hawk is Back! But there’s a lot of great work done in these remakes.  Not everything really works for me but the actual core gameplay is damn near perfect and evokes the feel of those older games wonderfully. I’m not 100 percent sure how much a new player might get out of this game, but for an old dinosaur like me, I loved it. And I eagerly hope they put out a Pro Skater 3 level pack at some point.