Previously: Daniel Bryan made me cry with his retirement and then got sick of being Nikki’s bitch.

Brie Bella compares Daniel Bryan and Nikki Bella. Bryan is a beautiful tree. Nikki is a flame of fire. Is she talking about Nikki or Eva Marie? Bryan and John Cena are wearing the same shirt, so Bella Mom compares them to Arnold Schwarzenegger and Danny DeVito from Twins. One guess as to which is which. I would watch a buddy comedy with Cena and Bryan.

Next, Brie informs us that her career is coming to an end and that she’s going to miss being with Bryan on the road. The best part about this is the dog in the pool with a life jacket. I love dogs wearing life jackets. It’s so cute.

Then, Nikki asks Bryan if he’s part of Wrestlemania. Oh boy. This could get sad real quick. Bryan doesn’t really want to talk about it. And that’s the end of that scene. SOMEONE CUT THIS SHOW TOGETHER BETTER!

Brie is leaving for her Wrestlemania Farewell Tour, leaving Bryan alone with Nikki. After that, they’re watching WWE RAW and Nikki is so excited that Brie got an actual entrance. She can thank Stephanie McMahon and the Diva’s Revolution for giving women entrances. Before, they just magically appeared in the ring. This is the episode where Lana attacks Brie. Remember that whole mess? “She just hit her with her finisher.” Nikki will be a lead announcer soon enough.

Bella Mom and Bella Brother inform us that they work for a company called JBN. It’s a company that Bella Mom started. No explanation as to what they actually do.

Bryan, Nikki and Johnny Ace discuss Bryan’s future. Nikki says, “Bryan, I feel like you have such great psychology.” Nikki pandering to the smarks. Nikki and Ace want Bryan to be a trainer in NXT and Nikki is just going to kidnap him and take him to NXT and be like, “This is Daniel Bryan. He has such great psychology. You can’t teach that.” Bryan doesn’t really seem down with this idea, but what choice does he have? He has to drive Nikki everywhere, and if Nikki wants to go to the Performance Center, Bryan has to drive her. What an evil genius.

Bryan talks to Brie in the car on the road to NXT. Bryan informs her that she doesn’t want to go to the PC, that he’s being forced. This all leads to Bella Brother complaining about being bossed around by Bella Mom at the JBN office. I should note that he’s going to the PC with them, probably to ask for a job so he doesn’t have to work under his mom.

SAMI ZAYN IS HERE! Bryan describes this new style he was working on. He basically wanted to wrestle like an animal. Bryan and Sami have the greatest wrestling match I’ve ever seen. I honestly can’t do this scene justice. Bryan is so outstanding, wrestling and rolling around like a monkey. And Sami is more than happy to oblige this weirdness. Then Bryan gets philosophical about his career and future. And the sadness is back.

They leave the PC with Nikki apologizing. No. Don’t apologize. By dragging him to the PC, you gave us the greatest scene in Total Divas/Bellas history. Thank you Based Nikki.

Cena meets with Bella Brother. Bella Brother was blown away by the PC and now wants to be a wrestler. He doesn’t think Bella Mom would support him. He asks Cena to put a good word in for him. “You’re sort of the face of the company.” This was pre-AJ Styles. Cena  basically says, “Screw off. Work for it.”

Bryan and Nikki join the conversation. Everyone pumps up Bryan about being a trainer. Nikki wants him to be like a host. Well, that’s basically what he ended up doing. Nikki must have put in a good word for him.

Nikki and Bryan try to find things they have in common. So Nikki takes him for tea, something she only does with her girlfriends. Bryan is officially the gay best friend. Bryan is excited for tea, macaroons, and spending more time with his wife. A simple man. A man after my own heart.

There’s a quick scene with Cena making fun of Nikki’s potential parenting skills. It was pretty funny. It was also pointless and lasted like 30 seconds.

Brie is back from the road and she can tell that Bryan is unhappy.

Bella Brother talks to Nikki and Johnny Ace about being a wrestler. Ace tries to tell him that he shouldn’t be a wrestler. I agree. This dude just wants people already in the business to get him a job instead of working for it. Nikki and Brie discuss Bella Brother’s job options. They just him to be happy and it sounds like he wants to change careers every three years. Again, doesn’t want to work for anything. Just wants it handed to him. I don’t like this guy.

Nikki and Brie go for a spa day. They talk about Bryan. Brie lets it out that Bryan has battled depression since he was 25. This is very real and I’m not touching it. As someone who battles depression as well, I truly hope the best for Bryan. 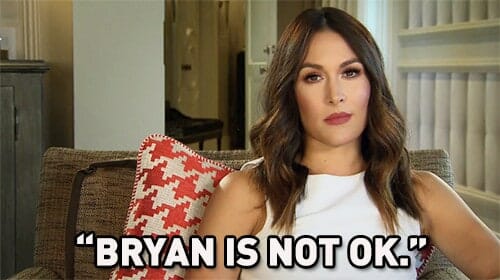 Unfortunately, it’s going to continue as Brie, Bella Mom, and Bella Brother take a walk to discuss things. Bella Brother just wants to feel important and doesn’t want to be bossed around so much. Well, she’s the boss. I feel him on wanting to be important and being his own person, though.

Family dinner time. They discuss pronouns, which are professional nouns. Bella Mom toasts Bella Brother for his hard work and gives him 20% of the company. WHAT DOES THIS COMPANY DO?!?!?!

Bryan and Brie go snorkeling. They discuss Bryan’s future. “We can’t let your brain go to waste.” “It’s already wasting away.” This is so sad. I don’t even like watching people go through the same stuff I go through because I know how hard it is for me. And that’s where the show ends.

The depression stuff was rough for me and I didn’t care about the Bella Brother and Bella Mom power struggle, which was straight out of the Vince and Shane playbook. Bryan and Cena continue to make this show great. Find the clip of Bryan and Sami at the PC doing animal wrestling and watch it on a loop.