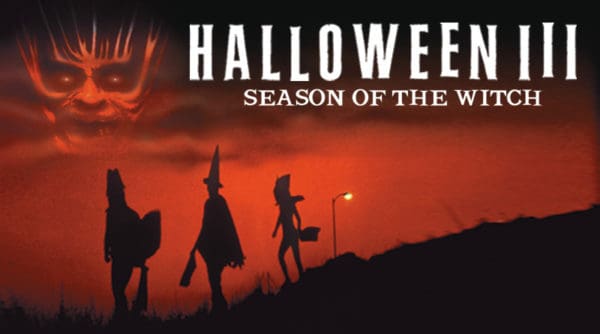 Sean Comer and Mark Radulich put Halloween 3: Season of the Witch, On Trial!

Halloween III: Season of the Witch is a 1982 American science fiction horror film. It’s the third installment in the Halloween film series. It is the first film written and directed by Tommy Lee Wallace. John Carpenter and Debra Hill, the creators of Halloween, returned as producers. Starring Tom Atkins as Dr. Dan Challis. Stacey Nelkin as Ellie Grimbridge. And Dan O’Herlihy as Conal Cochran. The story focuses on an investigation by Challis and Grimbridge into the activities of Cochran. He’s the mysterious owner of the Silver Shamrock Novelties company, in the week approaching Halloween night.

Halloween III is the only entry in the series that does not feature the series antagonist Michael Myers. Nor does it include story elements from either Halloween (1978) or Halloween II (1981). In fact, it treats the first film and, apparently, its sequel as fictional films. Especially, since one of the characters watches a trailer for the original during the film; additionally, the film’s tagline is a reference to the tagline from the original as well. It also departs from the slasher genre which the first two installments were part of, instead featuring a “witchcraft” theme with science fiction aspects and parallels to old Celtic fairy tales.

Carpenter and Hill believed that the Halloween series had the potential to branch into an anthology series of horror films that centered around the night of Halloween, with each film containing its own characters, setting, and storyline. Director Wallace stated that there were many ideas for Halloween-themed films. Some of which could have potentially created any number of their own sequels, and that Season of the Witch was meant to be the first of the anthology series.

On Trial: Halloween 3: Season of the Witch Review