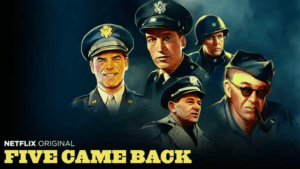 On this TV Party Tonight, Andrew Graham is back for more military talk! Five Came Back is an American documentary based on the 2014 book Five Came Back: A Story of Hollywood and the Second World War by journalist Mark Harris. It was released as a stand-alone documentary in New York and Los Angeles, and as a three-part series on Netflix, on March 31, 2017.