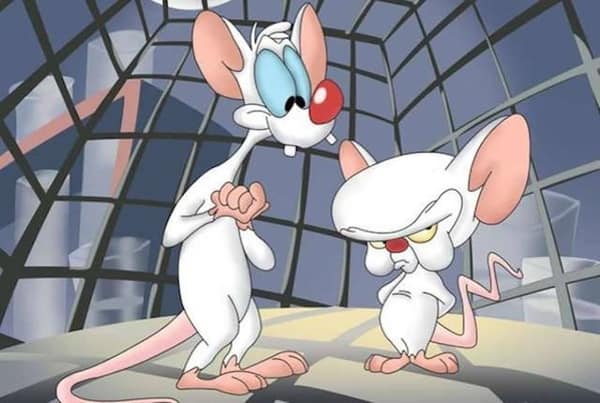 On this episode of TV Party Tonight, Alexis Hejna joins Mark Radulich to discuss the greatness of Pinky and the Brain Volume 1!

Pinky and the Brain, an American animated television series, originally aired in 1995. It was the first animated television series to be presented in Dolby Surround and the fourth collaboration of Steven Spielberg with his production company, Amblin Television, and produced by Warner Bros. Animation. The characters first appeared in 1993 as a recurring segment on Animaniacs. It was later picked up as a series due to its popularity, with 65 episodes produced. Later, they appeared in the series, Steven Spielberg Presents Pinky, Elmyra & the Brain.

Pinky and Brain are genetically enhanced laboratory mice who reside in a cage in the Acme Labs research facility. Brain leads as the self-centered and scheming. Meanwhile, Pinky’s good-natured, but feebleminded antics usually cause Brain’s plans to go awry. In common with many other Animaniacs shorts, many episodes are in some way a parody of something else, usually a film or novel.