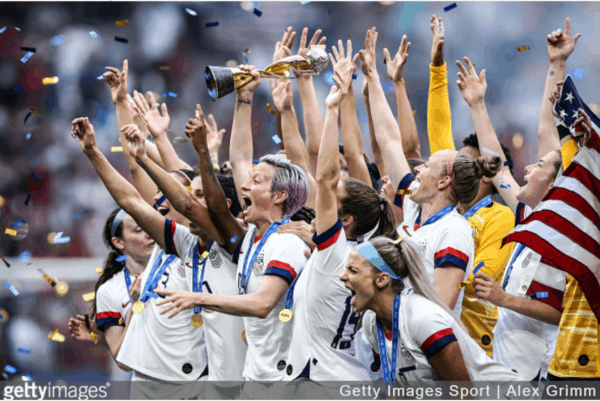 Soccer 2 The MAX hasn’t been on the airwaves in quite some time. We’ve got some people with some pretty busy lives after all. However, Erik Watkins and Rachael Kriger are back and better than ever. Erik and Rachael — who is now producing the show after getting ahold of some software and equipment — joined up to chat about a few happenings in the soccer world.

First off, the duo chats about the recent rulings on the U.S. women’s national team equal pay lawsuit. The ruling was not favorable for the reigning FIFA Women’s World Cup champions, but alas, the women have sworn to fight back, appeal and keep pushing for equal pay. Rachael and Erik make sense of the lawsuit and the ruling, and then bring the conversation to a bigger scale too. Chatting about how FIFA isn’t innocent in regard to equal pay, either.

Then, it was announced this week that Major League Soccer, the National Women’s Soccer League and the United Soccer League will open up individual training. However, clubs must follow their state and local guidelines. What does this mean for teams who are in hot-bed areas in regard to the COVID-19 pandemic? Do clubs that can practice have the upper edge over clubs in Los Angeles and New York? they discuss how fair this decision from all three leagues is.

Finally, to close out the show, the duo chat about the German Bundesliga starting up action in May. Should they follow the lead of the Netherlands and France and cancel their season instead? Are the clubs really following social distancing guidelines?

A podcast about the world’s game with a focus on the United States Men’s and Women’s club and international scenes, with some CONCACAF discussion thrown-in as well. Whether it’s breaking down Major League Soccer, NWSL, U.S. Men and Women’s National teams, and even some USL in there too. Starring Rachael Kriger, a current soccer writer for multiple outlets, and former writers Erik Watkins and Sean Garmer, the three come together to make the perfect attacking triangle each week. All three also played soccer growing up and into high school as well. So, these are three Footy lovers that have discussions about the happenings on this side of the pond.

Don’t let height fool you. Before becoming a journalist, Rachael Kriger was a goalkeeper. Yes, all 5-feet-two-inches of her. Now, don’t ask if she was good or not because that answer is up for debate. Rachael covers the U.S. men’s and women’s national teams, the Seattle Sounders, and NWSL for Last Word on Soccer as a senior editor. She loves football with an undying passion. Yes, she calls it football, since she hails from Europe (the colder part: aka, Moscow). Rachael’s favorite clubs are Borussia Mönchengladbach in Germany, Seattle Sounders in MLS, Washington Spirit in the NWSL, and the U.S. and Russian national teams.