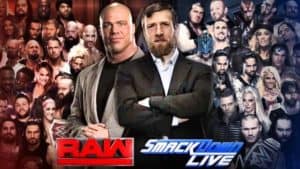 On this episode of Wrestling 2 the MAX, Gary Vaughan and Paul Leazar are once again left to their own devices as Sean tends to some family matters.

First up, they talk about some wrestling news as another Superstar Shake Up might be around the corner, Lucha Underground’s future looks a bit brighter, and some other topics are discussed (and ridiculed!)

After that, Paul & Gary review the latest episode of Lucha Underground! The Cueto Cup continues onward, and Rey Mysterio steps back into the ring to take on PJ Black! Can Rey gather some momentum heading towards his big title match with Johnny Mundo in four weeks time?

Then, they break down the latest episode of GFW’s Impact Wrestling. Alberto Del Rio takes on LAX in a gauntlet match, The Super X Cup continues to produce some great action, and Grado might have found himself a bride!

Finally, the crown a Superstar of the Week! The G1 continues to dominate our thoughts, but who walks out with the five points after a stellar week of wrestling?

We’ll talk about all of this and more on this week’s Wrestling 2 the MAX!