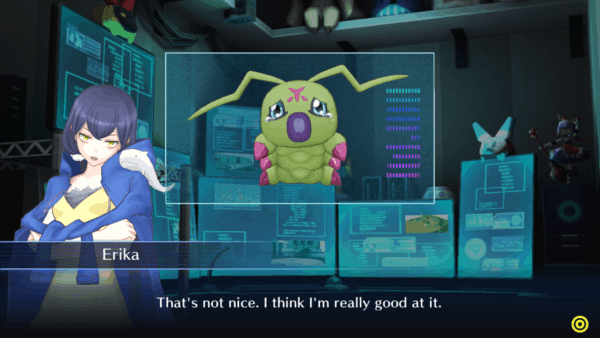 Be sure to check out Sean’s playthrough of Chapter 1 and Chapter 2 as well.

Wormmon lends a hand in an important moment. While Sean learns more about using the DigiFarm and digivolves some Digimon into recognizable names from the anime. While also running the first big sidequest in the game too.

Sean plays through another portion of Chapter 3.

On this one, Sean runs through some sidequests that lead him to finding a Lunamon and an Airdramon. Wormmon yet again adds some levity to the proceedings. While the Hudie group gets one step closer to finding Mephisto as well.

Sean continues on in Chapter 3.

This time the Hudie group is in search of Mephisto who’s been stealing accounts in EDEN. While doing this, you run into the Steam Dealers and the first Hacker Battle of the game. Wormmon shows up again too.

* Unbeknownst to Sean, it seems he hit his hotkey for the commentary button and from about 1 hour and 20 mins there’s no commentary from him. This was totally unintentional, sorry about that.*

This is basically all the last part of the story mission with the Hudie group trying to find who’s behind all of the Mephisto stuff at the Financial Institution. While planting secrets for things ahead. While Erika finds out something important too.