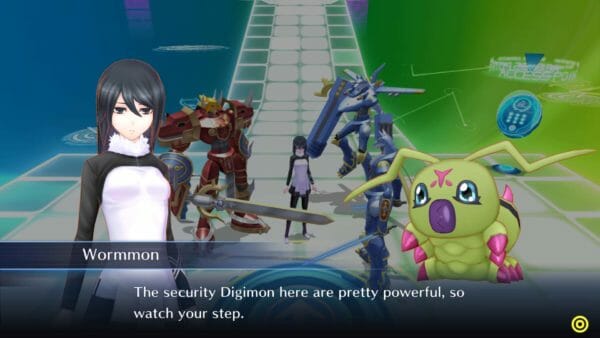 Be sure to check out Sean’s playthrough of Chapter 1, Chapter 2, Chapter 3, and Chapter 4 as well.

Keisuke Amazawa and Erika ponder about what exactly is causing the Digital Shifts. Sean gets into another Hacker Battle sidequest. Plus, he finds the mysterious blonde detective. And does a story mission with Fei and Yuugo, as they take on the “Dreamers.”

He begins with a few sidequests. One of them involving a big Hacker Battle. He also digivolves some Digimon as well.

After that, the Hudie group takes on a big main quest involving the Programming Grand Finals at a school. It’s quite interesting what the team finds there.

Finally, Yuugo sends you on another quest to find out what’s going on at Kamishiro and Hudie begins the search for Yuuko.

Sean keeps at it in Chapter 5.

He begins with a sidequest taking out a bad hacker. Then, it is on to meet Yuuko, as Chitose fails in charming her. While Keisuke finds out the hidden power of the Rice Omelet.

After that, it is time for the big mission of infiltrating Kamishiro and trying to figure out what’s really going on.

Sean makes it to the end of Chapter 5.

After taking a weird sidequest involving a gold Digimon. Keisuke is joined by others from Hudie for a sidequest about getting tickets for a young brother and sister.

Finally, Chapter 5 ends with a mission with Yuuko involving Friendship? And all sorts of funny moments ensue.