In being transparent up front, I didn’t finish We Happy Few. Frankly, I didn’t even come close. This is due to We Happy Few being a profoundly misguided affair that actively drove me off from playing it.  It’s not the worst game I’ve played this year, but it certainly approaches that precipice. 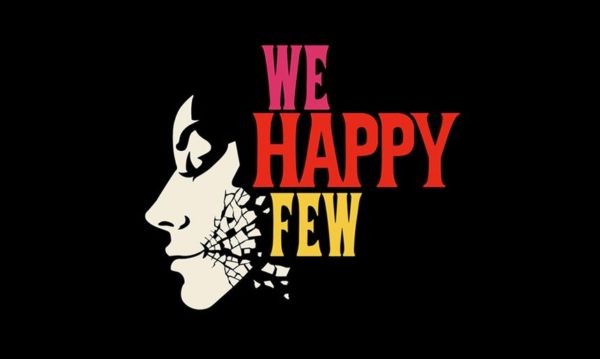 We Happy Few takes place in an alternate reality of the 1960s, inside the fictional town of Wellington Wells.  The United Kingdom didn’t do too well in World War II and had to do a “very bad thing.” As a result, the populace has started taking Joy, a drug that helps keep everyone happy and make them forget.  However, some people are immune to the drug or become tolerant of it, and are cast off from society. You play as three of these characters, each in their own little story. 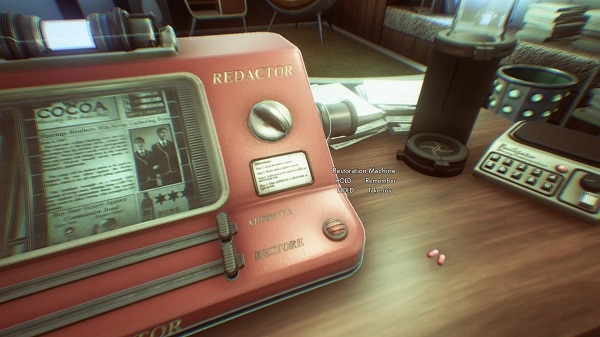 Right off the bat, there is a problem with the basic concept of We Happy Few.  The game tries to be too many things. It’s a bizarre mishmash of a survival game and narrative-driven single-player experience that never gels.  The initial trailer in 2016 made it seem like the game was going to be “BioShock on psychedelics,” which is a great tagline. Unfortunately, Compulsion Games had other ideas and it launched as a moderately survival-focused game.  It wasn’t as hardcore as Rust, or even The Long Dark, but the promise of the trailer wasn’t matched in the initial Early Access version. And now that it has released, it’s clear the developers were almost dragged kicking and screaming into making this game. 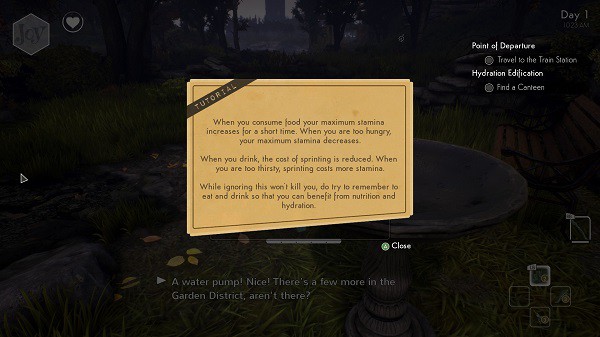 Honestly, the survival aspects of We Happy Few are the least of its problems.  There are meters that govern your hunger, thirstiness, and sleepiness. If you are thirsty, your stamina gets drained, and the thirstier you are, the lower the available stamina pool is. There are similar status effects for food and tiredness.  You can also get permanently injured, as a status effect, and it will require you to rest or bandage your wounds to get rid of the health loss.

The thing is, these survival systems aren’t hard or challenging in the slightest.  You’ll come across a ton of food and water in areas to replenish your supplies. Some of the food may be rotten and eating it can cause illness, but you’ll come across a formula for crafting medicine which negates this.  Beds are a little scarcer, but the actual penalty for being tired isn’t that severe.

This is all on the default difficulty, mind you.  You can adjust these systems (even mid-game) to be more or less challenging.  If you don’t want to bother with any of this stuff, you can freely turn it off as well. However, then you’ll simply be playing a very bland first-person brawler/stealth game.

Combat: What’s it for? 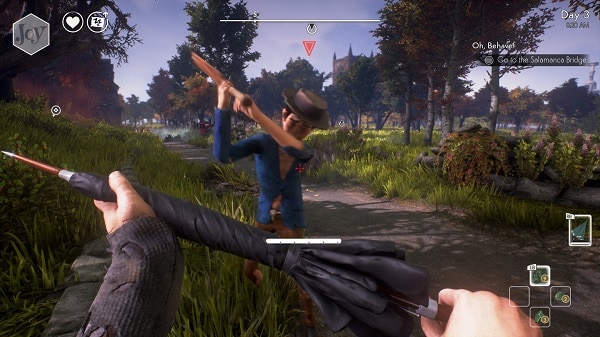 One straight-up bland part of the game is the combat.  While there are some ranged options (grenades, bottles, and darts) this is primarily a melee-focused game.  That wouldn’t be so bad if combat was varied, responsive, or fun. We Happy Few kept giving me flashbacks to Chronicles of Riddick: Escape from Butcher Bay, which came out in 2004 and had both vastly better melee combat and stealth mechanics.  Here, for melee, you can equip a weapon (club, bat, shock baton, etc.) and either guard or attack with it. There isn’t any type of analog combat at all; you just kind of wail away on the attack button and your character attacks.

Both Riddick and even Dead Island had the idea (somewhat) of analog combat.  Meaning, if you were holding right on the analog stick, your character would punch in a rightward direction, the same as for the other directions.  This made combat feel more visceral and strategic since you could target specific parts of an enemy to (hopefully) slow them down or kill them. Conversely, in We Happy Few, even though there are additional moves to unlock in the skill tree, such as a power (charge) hit or doing sweep damage, combat remains a generally dull affair.

The only other move you can do is a push.  This causes your enemy to stumble, which also breaks their guard. Letting you get in a few good hits in the process. A typical encounter goes like this. You hit the enemy a few times with your fists or an item. They attack, while you guard. You attack them, while they guard. Push them, thus leaving them open to your next attack. Rinse and repeat. 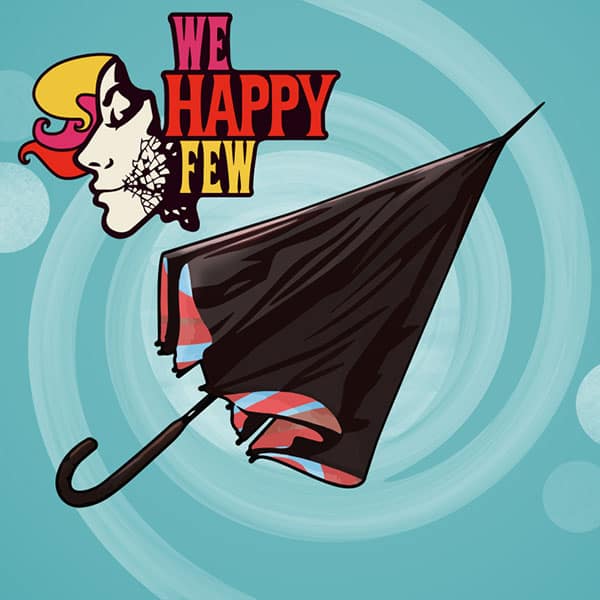 One hitch with combat is weapon durability.  With the exception of the two pre-order weapons, the game’s armaments are fragile and prone to breakage.  If you pre-ordered the game, you received the Jolly Brolly and the Not So Jolly Brolly. Both weapons are umbrellas blessed with infinite durability, with the “Not So Jolly Brolly” having the chance for a bleed effect. The “Jolly Brolly” is meant for knocking people out. While the NSJB is made only for killing. Both weapons can also be upgraded once you have the necessary parts. Plus, the JB can do shock damage and the NJSB can do burning as well.

The problem this creates is that there’s never a need to use any other weapons aside from the Jolly Brollies. They may get slightly weaker the deeper you get into the game, but that doesn’t matter when they have infinite durability.  It may a little more difficult, but you could probably make it through the entire game using only these pre-order weapons, and I feel bad for players who don’t have access to them.

A Stealth System from the 90’s 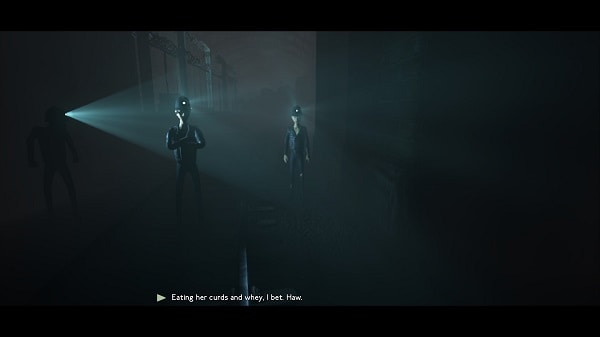 The other half of We Happy Few uses stealth mechanics.  While combat is merely boring, the stealth is straight up bad. Enemy pathing and AI are incredibly random and unpredictable.  I can watch a guard do the same path five times and on the sixth, when I try to approach (going as slowly as possible), the guard randomly turns around in the middle of his path. Thus, seeing me sneaking up from behind, and that starts a fight.  You can hide in flowers or tall grass, but visually it’s not handled particularly well at all.

Allow me to relate a representative story: One of the early missions involves you sneaking into an army base to turn the power off so that another character can rob the place.  I stealthed most of the way through but got spotted toward the end. About four soldiers ran up on me, so I quickly ran into a building, turned around, and locked the door.  The soldiers were then stymied and stuck. Even after the alert ended, I left the building via the other entrance and I could see the other four soldiers milling around, stuck in their patrol loops but glued to the door.  It was funny in a way, but probably not what the developers had in mind.

The Joy of Bugs

To say that We Happy Few is a buggy game is putting it mildly. Jim Sterling> has done the work and has way better video evidence than I do, but I ran into some pretty weird things in the game that made me shake my head.  Here are two examples: 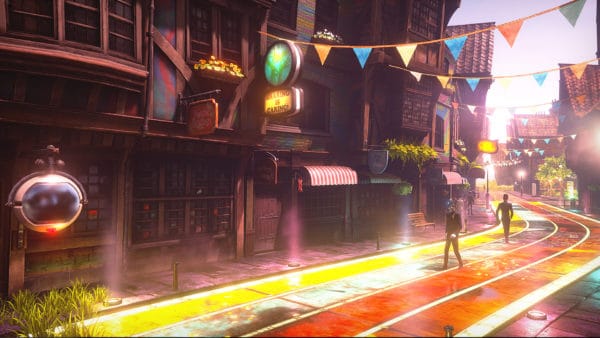 One thing that bewilders me about the game is why the levels are so big.  The initial area, the Garden District, is massive for no good reason. It can take you a good three minutes of running just to get to the next objective on your map.  It’s divided up into squares as an English farm might be, but it’s also just as spacious, with nothing to do. You can forage for supplies and such, but you won’t find anything great.  Side missions are rare, and usually, fall into the category of either a fetch quest or killing someone. It doesn’t get much better once you actually hit a civilized area, as other NPCs basically ignore you unless you’re wearing the wrong clothes. While offering almost nothing for you to do.

It made me reflect on BioShock a lot.  If you really examine it, BioShock is a very linear game with the illusion of freedom.  You almost always have a fat arrow pointing you where to go, but the levels are designed in a way to make you think they are more open than they really are.  In We Happy Few, the levels are as big as they seem, only they forgot to populate them with anything interesting or fun to do, so getting anywhere becomes a total slog.

One thing you do have to watch for, once you make it to civilization, is to keep an eye on your Joy meter.  When entering drug zones, you have to either take Joy or fake it to keep the police and the general populace off your back.  The Joy meter appears broken with a wildly inconsistent timer. The Joy mechanic, like the other survival mechanics, isn’t especially tough, and you can seemingly go a long way without taking too much of it. Well, as long as you don’t arouse too much suspicion.

Skill points are for chumps 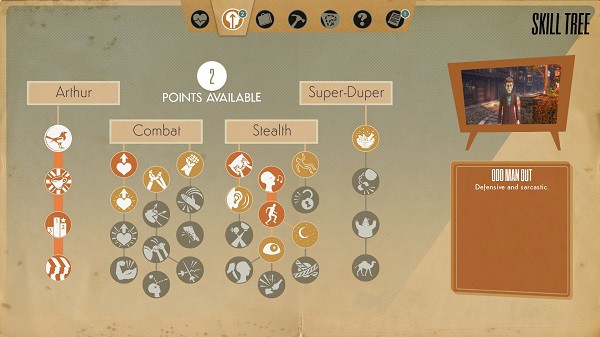 You do have a skill tree in the game, although it’s somewhat baffling. There isn’t really an experience system, and your character(s) don’t get better naturally or by performing actions.  They are simply allotted skill points at the end of each story mission, which you can allocate as you like. The problem is that the math sometimes doesn’t work out.  After doing one mission, I got five points and already had two left over, giving me seven for some reason. I picked a second-tier skill, which cost five points. I bought it and still had two points left over.

There are NO skills which cost two points. The lowest-priced skills, all of which I already have, are three points. Most third-tier skills cost eight, and the fourth-tier ones cost ten. Each character does have specific special skills, but they are even more expensive, with the highest being 15. Why have these inflated numbers in the first place?  Why not just have the game come out and say “You’ll only gain one skill point after each story mission?” Then, have each skill only cost a point, aside from the character-specific ones.  Why the pretense of having this arcane skill system when something logical and useful could have been done instead? 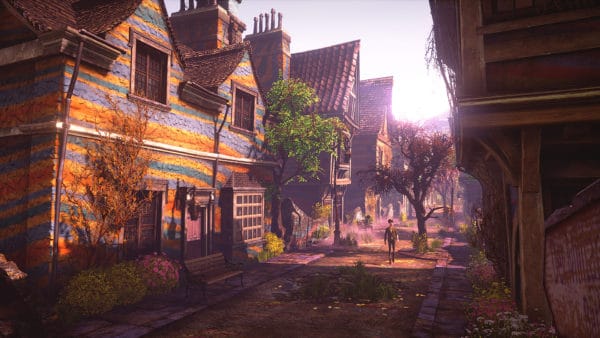 For all of the numerous flaws in the game, many of which I haven’t even mentioned, the tragedy is that We Happy Few is an artistically accomplished game.  The music is decent, it has a lot of voice work, and the visual design is top-notch. It also contains distinct districts, each with their own visuals and design aesthetics as well.  The rainbow roads, perhaps another Mario Kart nod, are cool looking. The design of the masked citizenry is interesting, and so on. It’s all in service of a hollow shell, though, and no matter how colorful the Easter Egg might be on the outside, if you open it up and there’s nothing inside, you’re going to feel cheated.

Overall Score: 4.0 out of 10 I wish the final game had lived up to the initial trailer.  As a BioShock-esque FPS it fails, and as a survival game it also fails.  The art direction and some of the odds and ends of We Happy Few are great but the game just doesn’t come together in a satisfying way at all.