Wolfenstein 2: The New Colossus is an exhausting experience on multiple levels. On the one hand, it has an expertly told story with well-defined characters, which take you from the heights of hilarity to the depths of despair with surprisingly little whiplash. But on the other hand, frustratingly archaic and generic gameplay threatens to take you out of the experience completely. 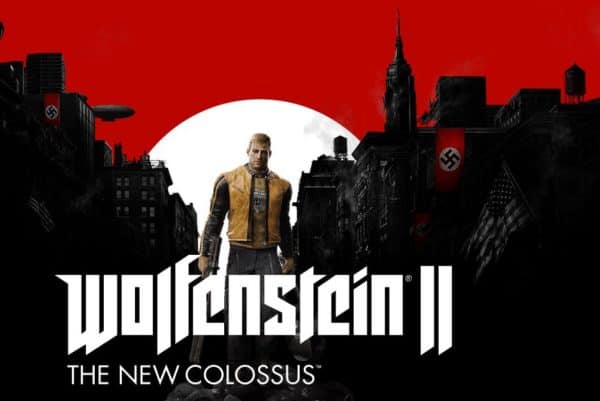 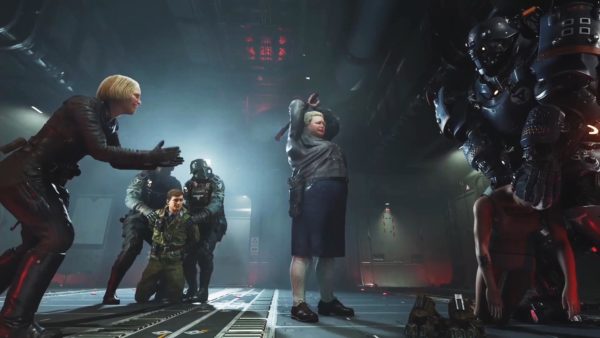 The New Colossus picks up right where 2014’s Wolfenstein: The New Order left off. B.J. Blazkowicz bleeding out after having defeated Deathshead. The rest of the Kreisau Circle finds B.J.’s broken body. And they rush to save his life.  During this, B.J. also flashes back to his childhood with the specter of his racist, abusive father front and center. The game pulls no punches here, as B.J.’s father wastes no time in dropping the N-bomb among other racist epithets. This is just a preview of other horrific things you encounter within the first 20 minutes of the game.

After that, five months pass, and B.J. awakens aboard the Eva’s Hammer. (A massive U-boat the Circle stole at the end of The New Order,) finding it under siege by the forces of the returning Frau Engel. Even though his body is broken beyond repair, B.J. commandeers a wheelchair and takes the fight to the Nazis. After some more grand events, Blazkowicz takes back Eva’s Hammer and a piece of high-tech powered armor along with it. Thus, begins the next step in the fight to free America from the Third Reich‘s rule.

A Story Worth Watching 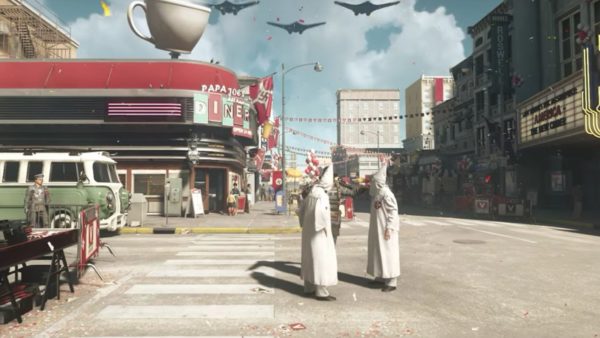 The New Colossus is at its strongest, when its story is playing out in all its delightfully dark and absurd splendor. One moment you watch helplessly, close to B.J. dies.  The next, a character drops acid for the first time, and starts freaking out. Even when things might be looking up, B.J.’s inner monologue reminds you he is fading away slowly from injuries he suffered at the end of The New Order.

In a less well-written and acted game, one would probably develop a strong case of mood whiplash from how suddenly the story pivots from comedy to tragedy and back again. However, the amazing performances from the main cast help offset this. You very quickly remember that everybody involved has lived through hell. Yes, they all have their flaws, but even after ten years of Nazi rule, they’re still surviving and hoping to bring down the evil regime.

Most of your interactions outside of the Kreisau Circle only serve to reinforce the overall sense of “wrongness” in this alternate history where the Nazis won. The parade in Roswell stands out, as you can listen to members of the Ku Klux Klan attempt (and succeed) to ingratiate themselves to some SS troops. And just about every single time Frau Engel is on screen, she serves as a terrifyingly sadistic reminder of just how cruel and insane Nazi beliefs can be. It’s just a shame that the gameplay drags down the moments of storytelling brilliance.

More of the Same 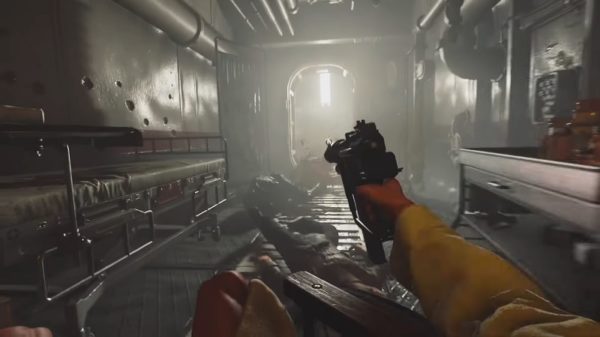 Don’t get me wrong, I don’t DISLIKE The New Colossus’s gameplay. I just find it bland and not exactly groundbreaking. You’ll find your way into one gray and brown area after another. Track down the commanders and (hopefully) kill them before they can raise the alarm. Then, clean up the remnants before moving on.  Along the way, you’ll get a pretty standard arsenal of First Person Shooter weapons, like the pistol, a submachine gun, a shotgun, and so on.

Sprinkled throughout Wolfenstein 2’s levels are weapon upgrade kits that allow you to upgrade these standard weapons in several ways, like adding a suppressor to your pistol or turning your frag grenades into EMP grenades. In addition, returning from The New Order is the perk system. Where you unlock benefits upon completing certain tasks. For example, the more stealth kills you perform, the faster you move while crouched.

Stuck in the Past 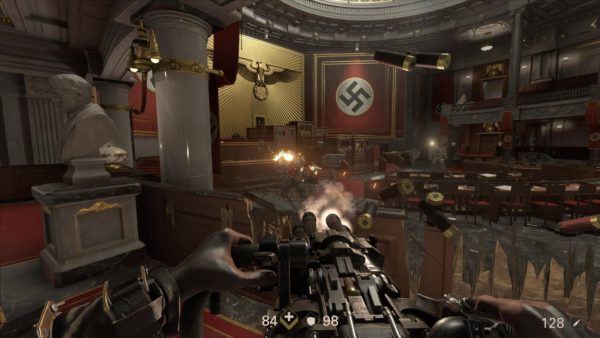 Another problem with The New Colossus’s gameplay, is the health system. Instead of the regenerative health scheme common to the modern FPS, Wolfenstein 2 sticks with the old system of health and armor points that refills via pick-ups found around the map and dropped from your enemies.

For a good chunk of the game, B.J.’s injuries translate to a maximum effective health of 50 points. You can “overcharge” to 150 or 200 points by picking up scattered health pickups. However, overcharged health depletes quickly. This leads to problems when paired with Wolfenstein 2’s lax handling of shooting. Particularly, when trying to figure out where exactly you’re being shot from. Often, you’ll find yourself flanked or blindsided. Leaving you dead within seconds. Especially, on higher difficulties. 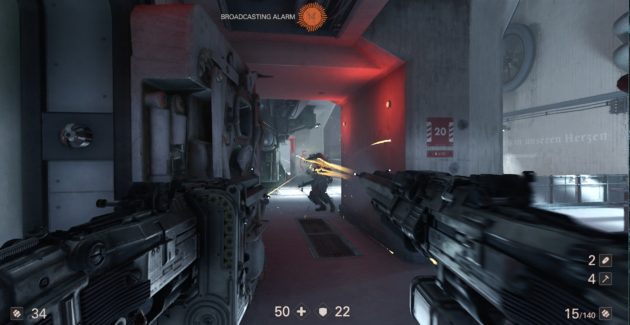 Speaking of playing on higher difficulties, prepare yourself for being very cautious and conservative, which is a gameplay style that runs counter to the storyline’s almost reverent display of excessive gore and violence. After a while, this disconnect becomes ridiculous, and I lowered the difficulty in hopes of becoming the Terror-Billy of Nazi nightmares. Lo and behold, on lower difficulties, it is indeed easier to go in guns blazing. Making the game a lot more fun, and lessening my issues in the process. There’s nothing quite like gleefully cutting through swaths of Nazis. Wolfenstein 2’s action oriented gameplay truly feels better that way. Sadly, the gameplay isn’t like that on Medium difficulty and higher. And it just leaves you with a crazy sense of frustration more than anything.

Beautiful in Many Ways 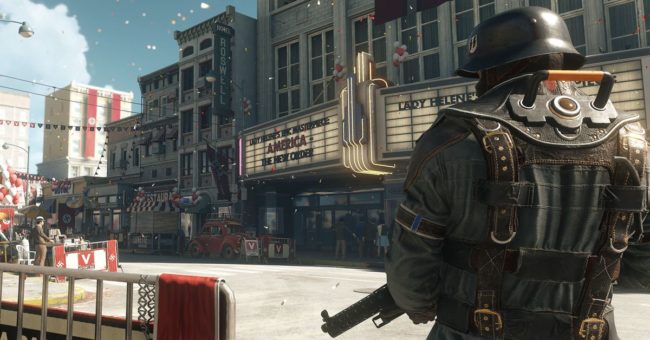 There may be issues with The New Colossus mechanically, However, one area it truly shines, is with the presentation. The locations you visit in non-combat situations are structured incredibly well. Especially because, they all feel like they are lived-in by real people. You explore the Eva’s Hammer between story excursions, finding brightly colored handmade signs pointing you in the direction of the crew’s quarters. Make your way through a city, you’ll find a home-style diner replete with a old-school milkshake dispenser. A true slice of Americana disrupted by the appearance of an SS trooper asking to see your papers. In addition, you can explore every level for unlockables, which helps flesh out The New Colossus’s twisted view of Nazi-occupied America.

The game is also superbly animated in general. Cutscenes flow from one moment to the next. Once in combat, there are animations for just about any situation possible. Particularly, is the surprising large variety of hatchet kill animations that are viscerally satisfying to behold.

If you find yourself wishing for more of The New Colossus, you do have a few options available to you in the base game. Firstly, The New Colossus starts with you revisiting the pivotal choice of The New Order, in which you choose which crewman dies. This choice of course has a large impact on The New Colossus. Since the surviving crew member rejoins the Kreisau Circle in their own distinct way. Providing different cutscenes and weaponry for B.J. to use. This gives the game immediate replay value.

Another option is the Enigma code machine returning from The New Order.  It allows you to decipher codes found off dead Commanders to track down Ubercommanders hiding in previous levels. Kill these Ubercommanders and you can access powerful upgrades to your arsenal of weapons and abilities.

There’s also the season pass known as “The Freedom Chronicles.” Promising some different gameplay experiences within Wolfenstein 2, along with additional story elements. Bethesda has also released several singular story pieces leading up to the DLC for free as well.

Overall: 8.5 out of 10:. Wolfenstein 2 is not subtle in any sense. It takes an unflinching look at humanity at its best, and at its worst. Holding up a magnifying glass so that you can see both extremes, in some excruciating detail. I can clearly see why the game is receiving so much praise. However, the few mechanical nitpicks I addressed prevent me from putting Wolfenstein 2 in the upper echelon of 2017. Although, it’s certainly still a game any shooter fan should experience. Especially, if you enjoyed New Order.