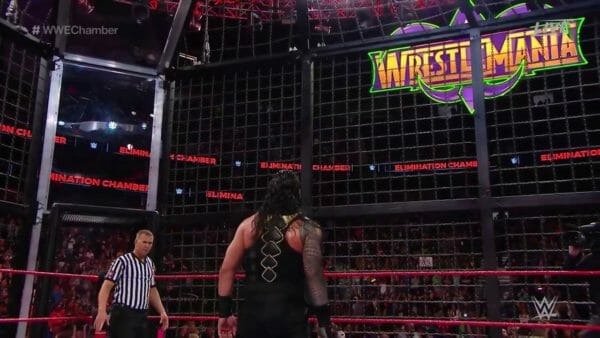 It’s the most barbaric stop on the Road to Wrestlemania, and this time, it’s a history-making event. Fit, with a couple of tire changes as Wrestling Unwrapped Reacts to WWE Elimination Chamber 2018.

For the first time ever, there is a women’s Elimination Chamber match, as Alexa Bliss puts her Raw Women’s Title on the line against five others who want their shot to hold the gold. Can the goddess hold on to her belt? Or does her road to Wrestlemania take a major detour?

Then, also for the first time ever, seven men collide for the right to face Brock Lesnar at Wrestlemania 34. Braun Strowman, Roman Reigns, John Cena, Seth Rollins, Finn Balor, The Miz, and Elias all look at a date with destiny as “The Beast” awaits them. Who is assured their spot on the grandest stage? And who will be left in the unknown?

As always, stay tuned for the big finish as well. Patrick, Harry, and Brandon Biskobing talk the best and worst of the show.

This is what happens when two guys who collect wrestling DVDs and love to talk, get together to talk about wrestling DVDs. The results are rarely pretty. Patrick rarely shuts up, and Harry is full of one-liners. This leads to constant badgering about the best and worst in wrestling.