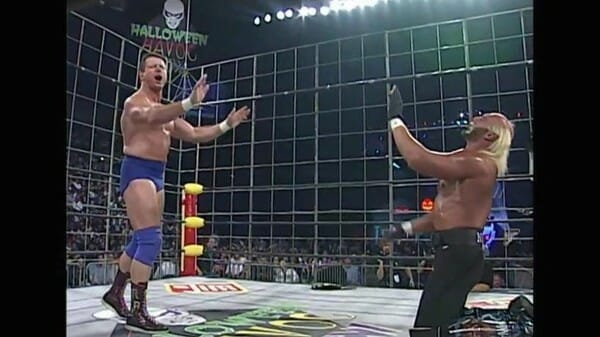 Happy Halloween everyone! And what better way to celebrate this spooky day than talking about the scariest thing of all? A hulk Hogan main event… in a cage… as Wrestling Unwrapped reviews WCW Halloween Havoc 1997.

It’s a match for the ages. Ages 60 and up. Hollywood Hogan battles his longtime rival Rowdy Roddy Piper inside of a steel cage. Will Hogan get past his demons and finally beat Piper? Or will Piper continue to haunt Hogan after all of these years?

But that’s not all, as Randy Savage faces DDP in a Las Vegas Sudden Death Match. These two have had absolute wars in the year 1997, and we await to see what they can pull off in this last man standing match.

And be sure to stick around for the big finish. The ghosts of wrestling paat come back to haunt WCW, and a crow lurks in the shadows, as WU reviews WCW Halloween Havoc 1997.