I sit here writing this at the start of fall in 2018.  I look at my PS4 collection and am baffled that I have not one or two Yakuza games in my library but four of them.

Yes, four.  Yakuza 0, Yakuza Kiwami 1, Yakuza 6, and now Yakuza Kiwami 2.  I am bewildered as to how this happened. Not just in how it happened to me specifically, but how it’s happened to the gaming world at large.  Yakuza used to be a series that was for Japanophiles who wanted to really go there.  Not for just your regular hardcore or even casual gamer, but alas, here we are. 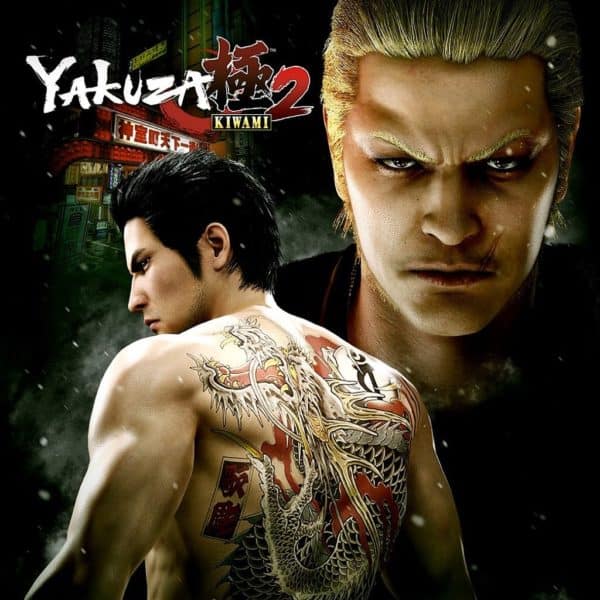 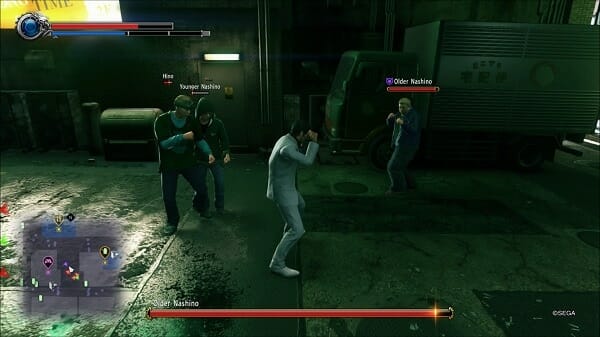 Kiwami 2 is a bit of an odd beast.  Functionally, it is about 96 to 97 percent of how Yakuza 6 plays.  It’s the same “Dragon” game engine, same fighting system, same leveling up system, etc.

But at least the story is different. Kiwami 2 takes place a year after the events of Kiwami 1.  The Togo Clan is in a bit of a shambles and Kiryu is all but retired to take care of Haruka (the young girl he ends up with from the last game). However, the clan leader makes a request of Kiryu to stop an impending gang war with the Omi Alliance and he finds himself pressed into service once again.  Considering they made four more games after these events, I find this happens quite a lot to Kiryu.

Fight for Your Life 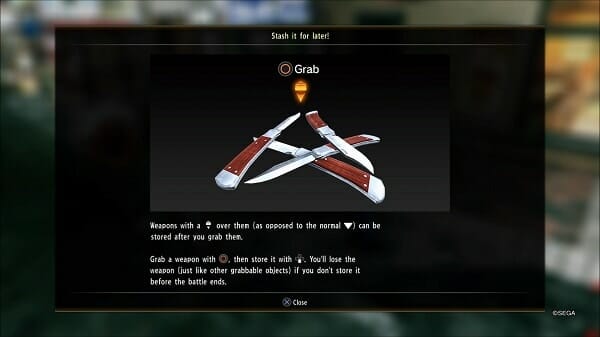 Thankfully, the fighting engine from Yakuza 6 is used here with only a few minor tweaks.  You still punch with the square button do kicks/heat moves with the triangle button, grab with circle and dodge with X.  It’s also still over the top and impactful with specific strategies from Yakuza 6 (grab enemies and spin them around to win the game) holding strong.

There are two changes I really noticed. You can now holster certain weapons and hide them from use.  For example, if you find a switchblade in a fight, you can put it inside your coat pocket for later use.  If you don’t, when the fight is over the weapon is discarded.  Second, you can now hold square or triangle for a few seconds to charge up your attacks.  This is a neat idea but the dropkick you do when holding triangle seems to miss more often than it hits.

Kamurocho is roughly the same as in Kiwami 1 or Yakuza 6.  There are a few small changes but nothing too important. Some businesses have moved around or a few new additions make their appearance.  Instead of Onomichi (the other city in Yakuza 6), Sotenbori returns, which is a locale from Yakuza 6. Only now, with a fresh coat of paint.

Quite frankly, this is a marked improvement over Yakuza 6.  One of the few negatives of the game was that Onomichi was a gnarled mess of a city with a very confusing layout. By contrast, Sotenbori makes complete sense and you can actually find your way around the city quite easily.  It has changed more from Yakuza 0, but the basic layout is the same and it’ll become second nature in no time.

Yakuza 6.  You can fight, do side activities, or eat to accrue points to buy new skills and upgrades.  This falls into the same red/blue/yellow/green/purple mechanic from Yakuza 6.  Some skills only require one color. While others might need two or three, and some require all five colors.

I still have the same problem with this system as I have in the past. It’s very hard to get specific points if you really need them.  For example, if a skill requires 300 yellow and you only have 100 yellow points, it can be a real grind to get more.  There are things you can do, like drinking certain beverages or just getting into fights/doing entertainment stuff. But when you really just want points to make progress, it is still a slog.  You do get a lot of points for doing story missions and such but the system is somewhat broken in this respect. 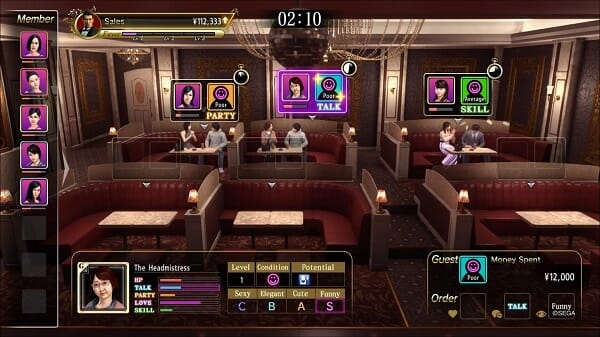 There are two really big mini-games in Kiwami 2 although one is a bit recycled.  The recycled one is Kiryu hosting a cabaret club much like Majima did in Yakuza 0. Everything is the same here. There might be different female models and I think a few hand signals are slightly different, but other than that, it’s the same mini-game.  I don’t have Yakuza 0 installed at the moment, but if I took a side-by-side shot of the cabaret club, I’m sure even the same assets are used in spots.  This isn’t completely bad as the mini-game is fairly easy and you can make a ton of money off it but it feels slightly cheap.

The other mini-game is Majima Construction.  Yakuza 6 had the Kiryu Clan which was a reverse tower defense mini-game.  Majima Construction *is* a tower defense game slightly mixed with a Real-Time Strategy component.  Your towers (the men you control) can move around at will. with different units split into a few categories such as attack, defense, balance, and support.  There are also different rarity levels for your units as well. 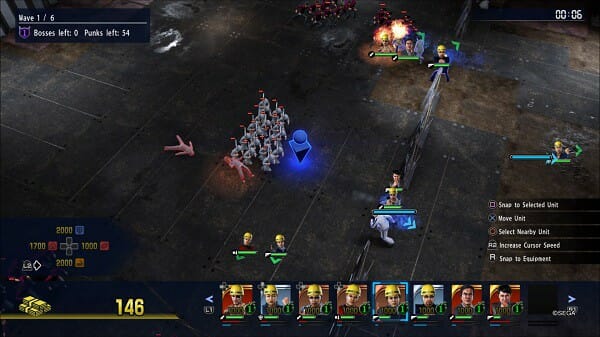 This construction mini-game isn’t fun at all.  RTS games generally work because you have a mouse and can assign control groups to different units.  You only have four quick select options (the dpad) to select units.  So trying to select a unit that is on the opposite side of the screen, if your quick select is already full, is really tedious.

Also, there are no codes to enter (like in Kiryu Clan) and the entire mode seems very flat.  Not having some special characters in there does make a difference.  Plus, the super units you got with the codes really broke the game, and that was fun. 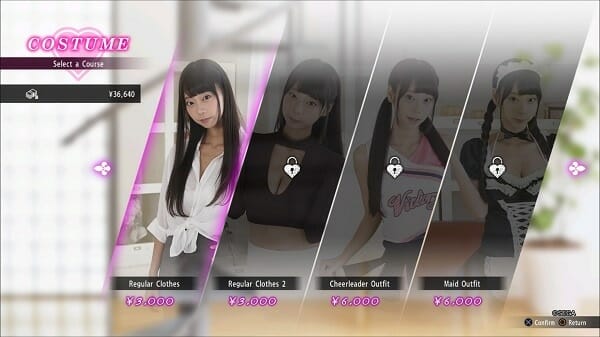 Kiwami 2 has other stuff for you to occupy your time with.  There are the usual karaoke, darts, batting practice, and UFO catcher machines for you to do.  The arcade games in Kiwami 2 are Virtua Fighter 2 and Virtual On. This may surprise some people, but Virtual On is a bad game. Especially, when you don’t have two joysticks to pilot your mech.  There is a new (and somewhat bad) photo-taking model mini-game that replaces the chatroom from Yakuza 6.  You have to string together a sentence to entice the model but it seems really random. 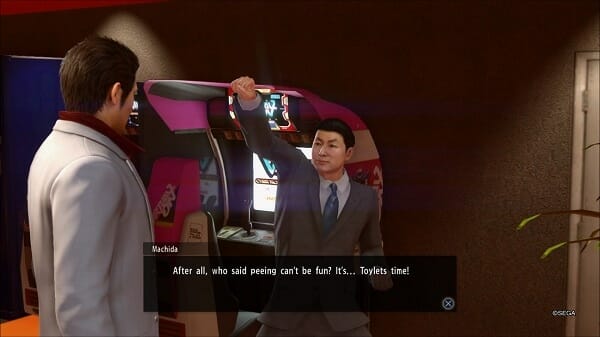 The last really notable mini-game is something called Toylet.  This mini-game involves you “controlling the spray” at a urinal equipped with a video screen against a CPU player.  It’s a horribly designed mini-game that gives you no feedback on what it is you’re actually supposed to be doing.

The trademark Yakuza humor does make a comeback though and is as weird and fresh as ever: 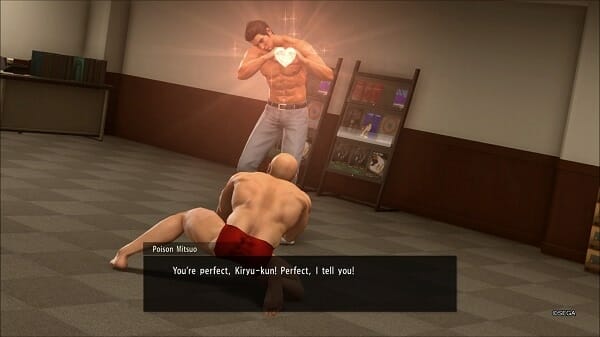 Eventually, you can play as Majima in his own separate storyline/quest.  It is fun to play as him but it’s an extremely short experience.  I finished it in about an hour or so and even then I was kind of purposefully doing things to extend it out.

Overall Score: 7.5 out of 10 In some respects Kiwami 2 is a better game than Yakuza 6 but that’s almost strictly related to the battle system.  Most of the other ideas in the game are recycled from past games with some slight reductions in production quality over Yakuza 0 or 6.  Still, Kiwami 2 is definitely better than Kiwami 1 and if you’re a fan of the series, you probably already picked this up.

This game was reviewed using a digital code provided by SEGA