We are in an age of gaming that is very interesting. You have one side of the market, where big developers are trying to use the best graphics and big budgets to push giant experiences at the players. Games that push systems to their limits to bring that “wow” factor. While attempting to win the attention of gamers with far more options than ever. The other side feels like it is a collection of gamers whose tastes are formed from games of their past. Passing on realistic graphics and gigantic worlds for a nostalgic feeling.

Newgrounds started it all by giving creators a platform to create flash versions of some of their favorite games. Then came the Xbox Live Arcade, which opened the door to new creators and gave them a realistic platform to showcase those nostalgia based talents. Now with places like Steam, the invention of Early Access, and even crowdfunding ventures like Kickstarter. Creators can find the funds needed for fulfilling their nostalgic dreams. A large portion of the indy gaming scene is based on those nostalgic feelings and 20XX is one of them. 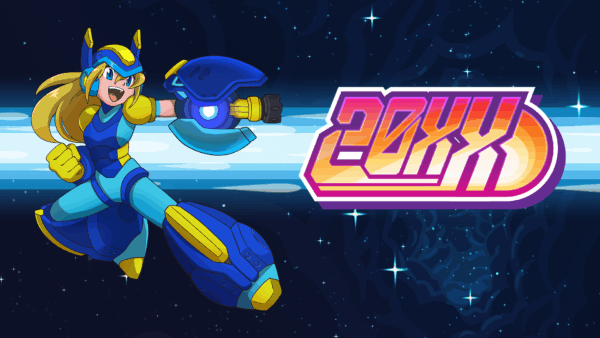 How It All Started

Originally placed on Kickstarter in spring of 2014, the game formerly known as Echoes of Eridu was funded by Batterystaple Games. Developer Chris King and crew felt like Capcom had given up on the Mega Man franchise and wanted to take a crack at it. The game released on Early Access in November of 2014, and renamed 20XX based on the dates shown on early Mega Man games. Using the funds earned from both Kickstarter and Early Access, King and crew released the full title on Steam on August 16, 2017, and less than a year later it has reached the three main console platforms.

Adapting the Roguelike to Mega Man 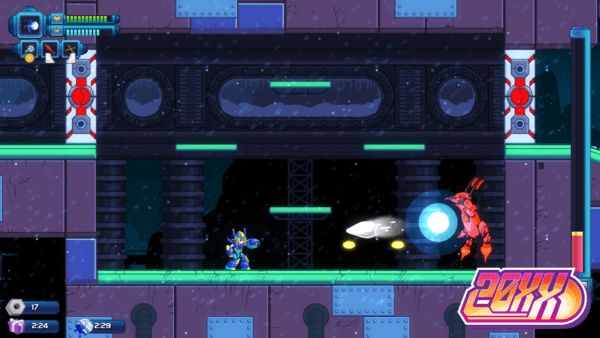 20XX takes the Mega Man X formula and changes it up. Adding in several Roguelike elements to the gameplay. However, unlike most roguelike games, the carryover from an attempt to attempt feels minimal. During a playthrough, the player can collect Soul Chips by defeating tough enemies in a level. Once that playthrough has ended, the player can use those chips in unlocking abilities.

There are a few upgrades that permanently raise the starting health bar and strength. However, most of the chips are spent on unlocking items found during subsequent playthroughs. This structure allows players to feel like they are making progress. While never making the game feel easy. 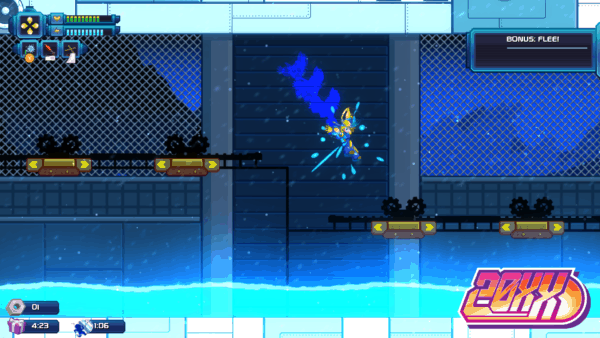 Decision making is important in 20XX. Before even starting a level, you can choose between two different characters. The two characters play differently. Nina is based around your typical Mega Man character. She’s dressed in blue and uses a power blaster to shoot her way through the challenge. Then there is Ace, who uses an energy sword to hack and slash his way through enemies.

Both characters can find power upgrades to their weapons which change the way they play. For example, one upgrade can have Nina shooting in all four directions. However, each bullet does less damage as it hits. While for Ace, he could use a shorter sword swing that does much more damage than normal.

You can also use these two characters at once in co-op mode as well with a friend. 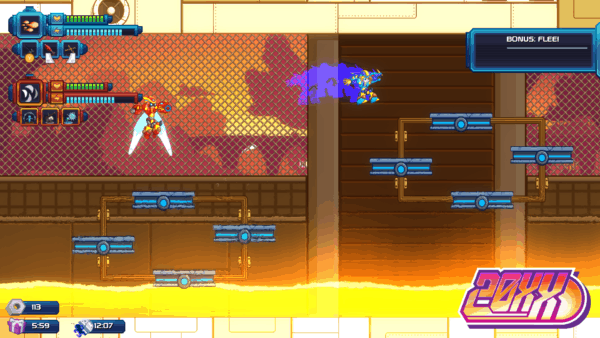 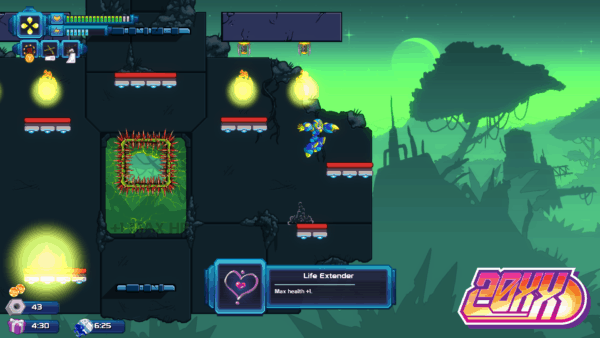 That feel of progression really takes flight when you look at how the stages are structured. You randomly start on one of the eight levels. While fighting through that first stage, you can find power-ups that increase your health, or how much damage you cause. You can also find different weapon abilities. And also how often enemies drop health and nuts. Nuts are used at shops spread across the levels. They allow you to purchase power-ups or health. 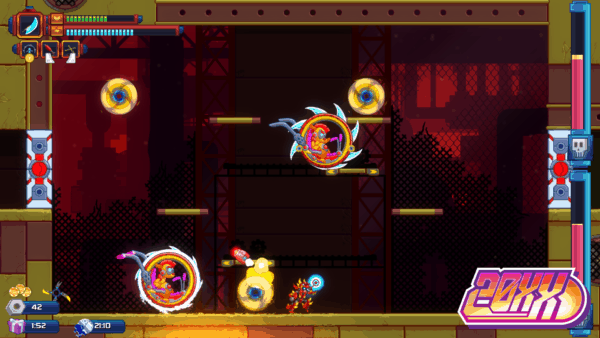 At the end of each stage is your typical Mega Man boss battle. However, 20XX does a nice job of having variety between the eight bosses. Making each of them feel unique. After each boss battle, you must make a choice. Do the regular Mega Man trope and take the power from the boss, or select a different power up. Although, you can only hold three different boss powers at a time. With each power set on a certain button. Giving players this choice allows for more variety in each playthrough as well. Then, after defeating the first boss, the player gets to choose between three randomly selected bosses for the next level. 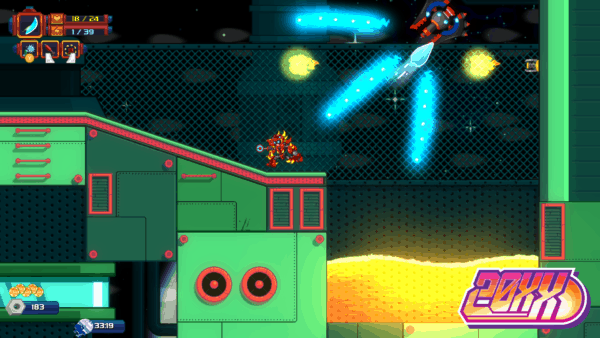 There are four different styles of stages. Each showing up twice in a playthrough. All four stage styles bring their own unique feel to regular platforming areas. They each feature the typical elements of fire, ice, air, and nature. Every two bosses share a stage style, although you take different paths to get to each one. The decision making comes in when you realize that while you improve and your stats increase, the levels get harder right along with you.

For example, playing the fire level first in one playthrough has way fewer enemies than if you play it as the seventh level. Literally going from 0 to hundreds of bullets flying on screen. This helps each level feel fresh, as the difficulty changes based on when you encounter it. The bosses are no different, as not only will they throw more at you, but they have extra phases to go through if you face them later in a playthrough.

All of this goes into each level being procedurally generated. Most of the paths feel the same, but some platforms are in different spots. As well as, the ever-changing enemy placements too. Unfortunately, this can also lead to some frustration as the overuse of moving platforms can wear on you after a bit. 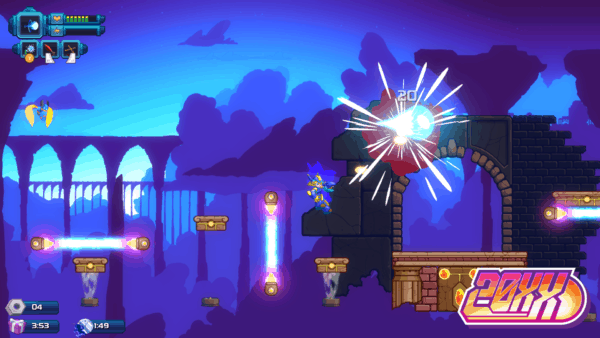 All of these decisions are great, but they do come at a cost. While each playthrough can have a different feel based on what route the player takes. It doesn’t take long for the levels to start feeling the exact same. Again, each level style is used twice, so you already start feeling like you are repeating the same thing over and over quickly. Especially, since each of the four level types all rely on the same level structure. Also, none of the level styles do much in changing how the game feels.

The enemy types are few and far between as well. You’ll run into the same few enemies several times through each level. This has always been an issue in any roguelike game, as the point is to play the same areas over and over. While slowly become stronger and gaining your progression that way. However, in 20XX, there are many points where it feels like a crutch. The sameness continues even in game style. The game attempts to show depth with daily and weekly challenges, but in the end, each of those are just modes where you play the game but report your score at the end.

A real feel of consequences to decisions

Felt like the procedurally generated levels were used as a crutch

Overall Score: 7 out of 10 20XX is a great experience for any Mega Man X fan. A wonderful attempt to bring something different to that genre. Unfortunately, the game does lack a bit of depth. Unless you really fall in love with the game, you’ll finish it in just a few sittings. Sadly, the console release also came in the same window as the Mega Man X Legacy Collections, and it may get lost in the shuffle.

Ultimately, I enjoyed 20XX and the challenging gameplay. However, I do not see myself going back to it very often in the future. Hopefully, a sequel is announced at some point, so it can put a smile on my face yet again. If anything, 20XX really left me wanting to see what comes next from Batterystaple games. It really feels like they have something here, there just need to be more of it.