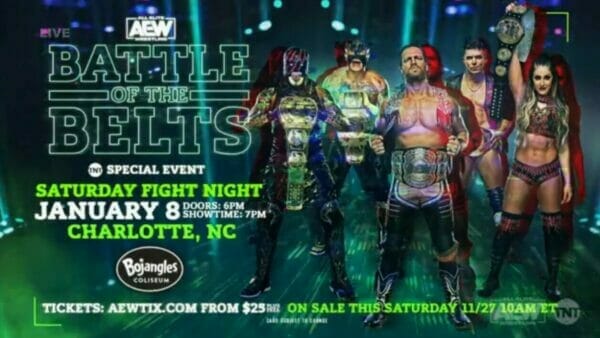 Chris BaileyX3, Neil Blackwood and Mark Radulich present their AEW Battle of the Belts January 2022 Review! AEW Battle of the Belts (January 2022) was a professional wrestling television special produced by All Elite Wrestling (AEW). The event aired live on TNT and took place on January 8, 2022, at 8pm Eastern Time (ET) at the Bojangles Coliseum in Charlotte, North Carolina. It was the first of four planned episodes in the Saturday Fight Night series, which air quarterly throughout 2022.

As its name implies, all three matches on the card were championship matches. In the main event of the one-hour special, Dr. Britt Baker, D.M.D. took on Riho for the AEW Women’s World Championship. On the undercard, Ricky Starks wrestled Matt Sydal for the FTW Championship. Finally, Sammy Guevara challenged Dustin Rhodes for the interim AEW TNT Champion; Guevara was originally scheduled to face Cody Rhodes for the actual title, however, Rhodes was pulled due to COVID-19-related issues.