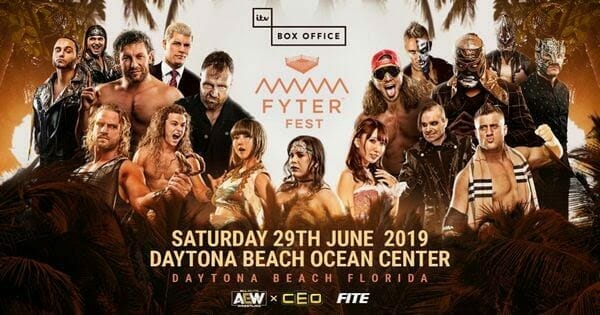 Chris Bailey X3, The Man They Call TMC and Mark Radulich review AEW Fyter Fest 2019! Fyter Fest was a professional wrestling event produced by the All Elite Wrestling (AEW) promotion in co-sponsorship with Community Effort Orlando (CEO). The event took place on June 29, 2019, at Ocean Center in Daytona Beach, Florida, alongside the CEO fighting game event. The name, slogan, and logo of the event parodied the fraudulent Fyre Festival. The event aired for free on the B/R Live streaming service in North America and was available through pay-per-view internationally. It was the second edition of CEO’s professional wrestling event at the Ocean Center, following the previous year’s CEOxNJPW: When Worlds Collide, which was in co-sponsorship with New Japan Pro-Wrestling (NJPW). Fyter Fest was AEW’s second-ever event held, subsequently being the first event in the Fyter Fest chronology.