I have a pretty long love affair with the Assassin’s Creed series.  I started with Assassin’s Creed 2 and never really looked back.  I’ve tried to play the first AC game from time to time, but that game is too gnarly even for me.

I’ve played and beat every single main Assassin’s Creed game, and even a few of the ancillary titles (Assassin’s Creed: Rogue).  So, as someone who is a big fan of the franchise this collection suits me just fine.  However, some aspects of all three games have aged well. While, some aspects are even worse. 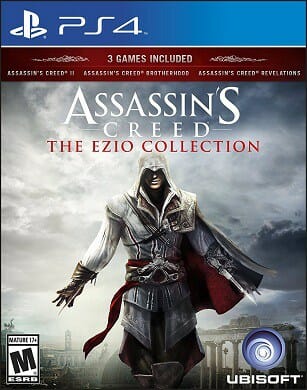 If you want to talk about quantum leaps in sequels it doesn’t get much bigger than the jump from Assassin’s Creed 1 to Assassin’s Creed 2.  Aside from the new character of Ezio Auditore, there were some big changes made in various areas. A major shift to how combat worked within the narrative structure of the game. How you can earn money. The stealth mechanics, and more.  Almost every gameplay system from AC1 was changed (and improved upon) in Assassin’s Creed 2. 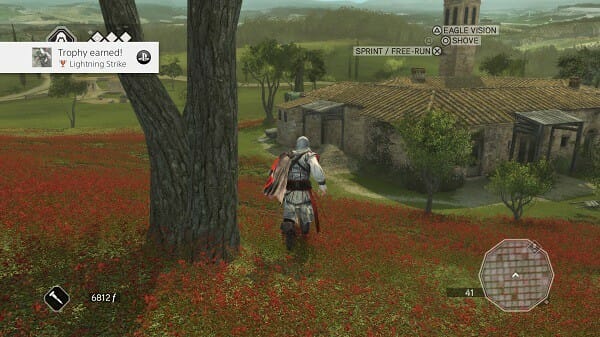 Combat in the first game was a complete chore because your counter timing had to be perfect. You couldn’t strafe or jump around. Not to mention, you seemed weak.  In AC2, the counter system is much more forgiving, to the point of being broken. There are more moves at your disposal, and you can slaughter reams of guys with ease if you know what you’re doing. 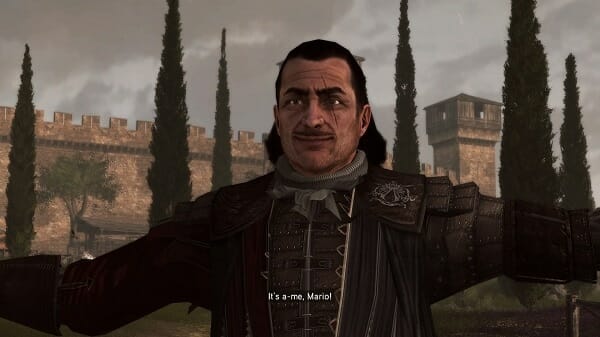 A basic gameplay system of the first game was you have to actually research your targets beforehand.  This generally involved a lot of busy work pickpocketing people, or eavesdropping on conversations.  This was completely removed in Assassin’s Creed 2.  The game is far more linear, each major target is broken up into individual missions, which eventually culminate with you assassinating them.  Most of the missions aren’t hard. They generally boil down to you killing some low level grunts. Perhaps, stealing some object, or even rescuing someone.

In AC2, you can actually earn money, which is a nice change of pace from AC1’s economy.  About a quarter through AC2, you are introduced to 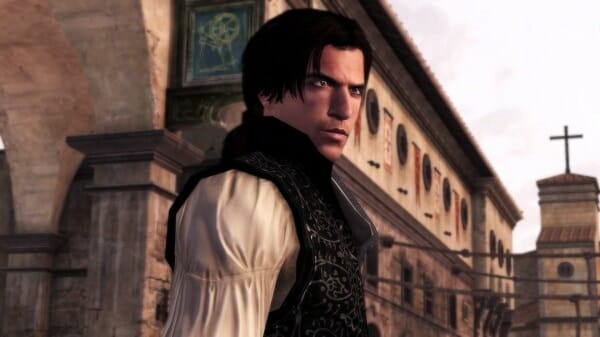 Aside from Ezio being a much better hero than Altair was, the story is also a much more personal affair packed with interesting characters.  For starters, your main friend in the game is Leonardo da Vinci and his portrayal is just great. You also meet characters like La Volpe, Caterina Sforza, Machiavelli, and Rodrigo Borgia.  These people come to life in this game and it makes history seem much more exciting. 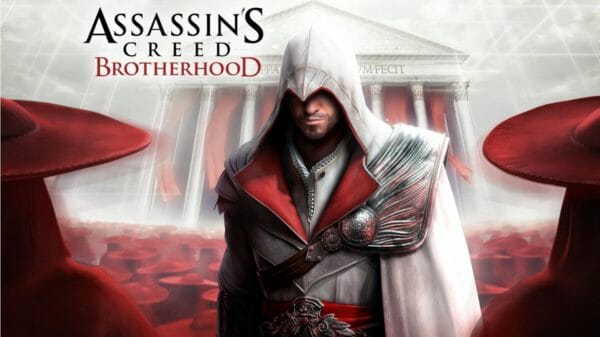 Honestly, Assassin’s Creed Brotherhood is just AC2 but squared.  They fixed a few niggling issues AC2 had and introduced some dramatic and important systems to the game to make it a more cohesive and grand experience.

One of the new systems in Brotherhood, is in fact the brotherhood you acquire in the game.  The Brotherhood is your gang of assassins that you send out on missions so they gain experience and help you out in the main game.  As you progress through the game, they get better in both combat experience and gear. Then, they can be used pretty frequently if you need some extra help.

In Brotherhood, Monteriggioni is gone. So, the upgrading mechanic is now applied to the vast city of Rome and its surrounding areas.  You can choose to open Blacksmith, Tailor, Doctor and Art shops to supplement your income.  You can also open up banks to actually pick up your income, so you don’t have to keep going back to a single place over and over like in AC2. 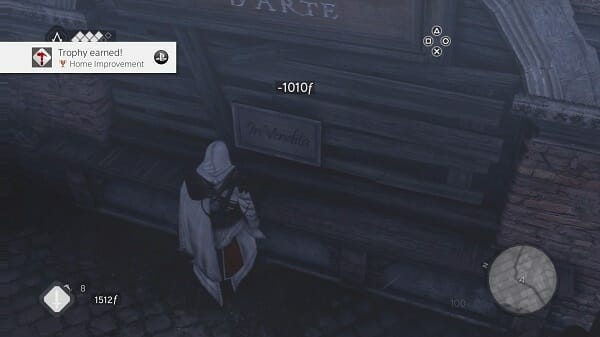 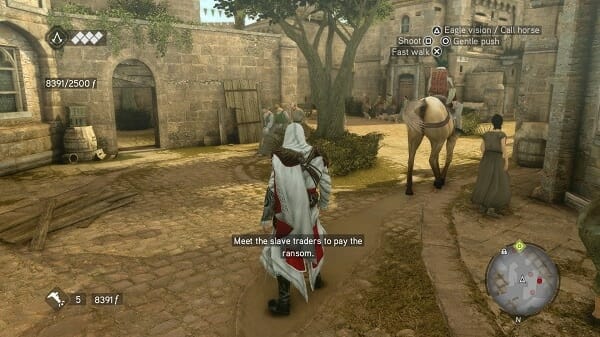 There are two big additions to combat in Brotherhood. The ability to chain together kills, and the crossbow.  Chaining together kills works by you countering an attack, killing the attacker, then moving the stick in the direction of an enemy and killing them in one blow.  Then, you move the stick towards another enemy and can kill them in one hit as well.  You can keep this kill chain going so far as enemies are reasonably close to you, or you don’t get hit out of it.  The crossbow is a new ranged weapon, largely replacing the gun in AC2. Since it’s a silent weapon, you can use it to kill foes from afar.

As opposed to AC2, there are hidden goals for you to complete in Brotherhood.  These usually involve killing an enemy in a specific way. Being completely undetected throughout a mission. not taking damage, etc.  None of the optional goals are mandatory, but they do provide some extra challenge for the player to try accomplish something.

Not only is the story in Brotherhood just as good as in AC2, but they expand the present day narrative as well. By letting you get to know Shaun, Rebecca and Lucy a bit more as you go through the main campaign. 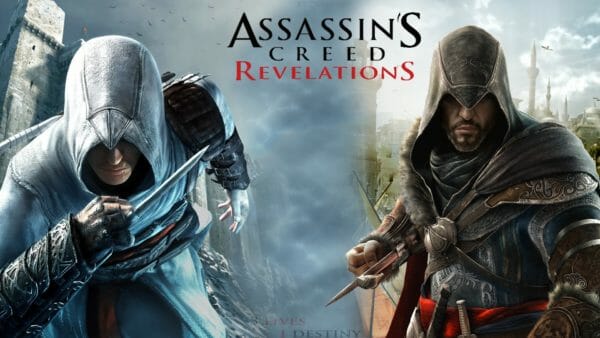 Assassin’s Creed Revelations is a game that is very at-odds with itself.  While there is nothing fundamentally broken in the game, the new stuff they add to the game isn’t a lot of fun. They also do some wonky things to gameplay that hurt it. 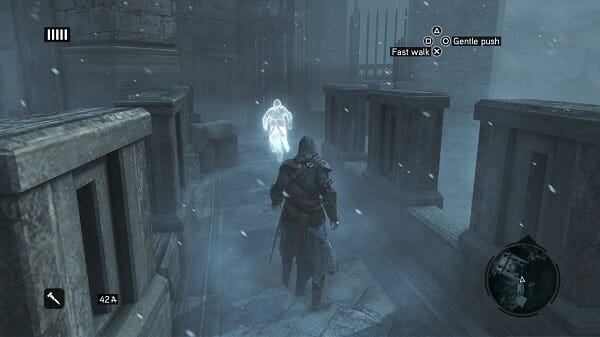 One of the only three big additions to the game is the Hookblade, a new type of blade Ezio can wear in his right gauntlet.  You can use it to climb around a bit faster and do a few more acrobatic moves, but that is literally it.

In the prior games, you really only had access to smoke bombs.  In Revelations, you can build your own types of bombs such as: Distraction, Tactical, and Lethal.  Distraction bombs let you distract guards to a specific area.  Tactical bombs are used for specific reasons or to flee from combat. Lethal bombs just let you kill enemies in an area with some type of ordnance.  Aside from the smoke bombs, none of this stuff is actually impactful to the game though.  It just feels like busy work they added to make it seem inventive, when it’s really not. 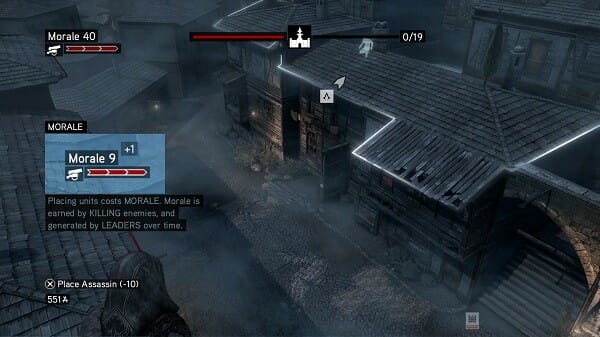 Finally, tower defense is in Assassin’s Creed!  This is a wholly needed gameplay system that everyone was clamoring for right?  In case it’s not coming through, I am being sarcastic here.  The tower defense mode involves you trying to protect an assassin’s den from waves of Templar invaders.  You can assign various assassin types like archers, air assassins and rifle men, to attack the waves as they approach.  You can also set up barricades to slow down enemy troops, letting your own soldiers take more time attacking them.  I literally did this mini-game once, because of how inconsequential and meaningless it is.

Speaking of hollow, we come to the story.  It feels like a very pale imitation to the stories told in AC2 and Brotherhood.  The characters are less interesting, the political machinations are kind of incoherent, and a lot of the game seems trivial.

So, aside from a lot of the problems I listed above, there are some gameplay quirks that hurt this game.  For example, buying and upgrading property raises your notoriety level by a quarter.  The notoriety system is there to make you try to behave stealthily, or at least so you don’t kill everyone.  Honestly, I don’t understand the logic of you gaining 25% notoriety just for opening a book store.  Conversely, to get rid of notoriety in earlier games you had to rip down posters. Bribe a herald, or kill an official.  In Revelations, you can only bribe a herald or kill an official, the ripping down posters aspect is gone.  This is made even harder because trying to find heralds, which randomly spawn, can be a big pain.

Enjoy this video of some graphical corruption I took within the first five minutes of me playing Revelations.  I encountered no other issues in the package, but it was a nice omen for what I was getting into:

The Package as a Whole

Also in this package is the short CGI film Assassin’s Creed Embers, which tells the story of Ezio’s eventual death.  The animation style in this film is very strange and doesn’t mesh at all with the established art style of the games.  Assassin’s Creed Lineage is also a part of this set, which is a prequel short live action series that focuses on Ezio’s father, Giovanni.  It’s a little on the cheap-looking side, but is still an interesting addition to this collection.

As a collection, this package does have a lot of content for you to experience.  None of the Assassin’s Creed games are short, and each probably takes between 15 to 20 hours, which can be doubled if you want to really 100% each game.  I still think Brotherhood is the best of this package by far, with AC2 being right behind it. AC2 doesn’t quite hold up as well as I remembered, but I’m judging it against Brotherhood. Plus, judging it against the far later games in the franchise as well.

I do wish this package had the superb multiplayer mode from either Brotherhood or Revelations, like the 360/PS3 versions did, but that’s just me.  If you like the Assassin’s Creed franchise at all, this is an easy purchase to get two of the most revolutionary games in the franchise on modern systems, as well as Revelations.

Each game has wide open worlds for you to explore

Assassin’s Creed Revelations is a waste

No multiplayer, which was fun in the original games

Overall thoughts:  8 out of 10  Assassin’s Creed 2 and Brotherhood are landmark games for the last console generation. They give you exciting worlds to explore and have tons of interactive elements.  Revelations is a tad blander, but still a decent enough experience.  It’s a shame the multiplayer mode couldn’t survive the trip to the next generation, but it’s not enough to harm the overall package too much.  If you’re looking for an Assassin’s Creed experience this year, this collection isn’t half bad to go back to and play again.