I’ve been playing the Assassin’s Creed series for a long time, starting with the second one.  The series has had its up and downs, going from near “Game of the Year” contenders for certain games in the franchise, to being some of the most disappointing games of a console generation. The series, prior to this, had been on a yearly release schedule, with Ubisoft shipping a new game out, come hell or high water.

However, that changed last year when AC Syndicate released.  While Syndicate was a great game, the core systems of Assassin’s Creed were a little long in the tooth. Fans pleaded for a re-invigoration of the series.  Assassin’s Creed Origins changes the formula in a lot of respects. However, I’m not sure if it’s quite the step forward the series needed. 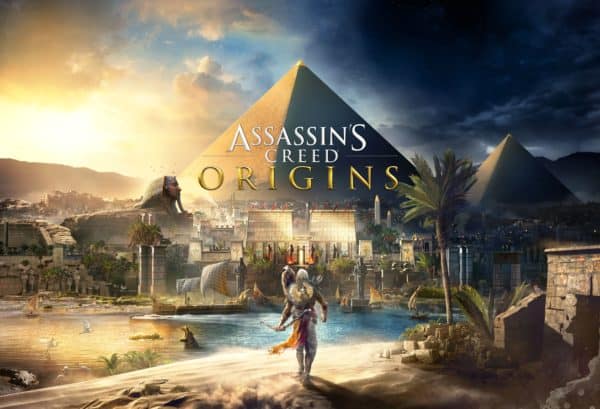 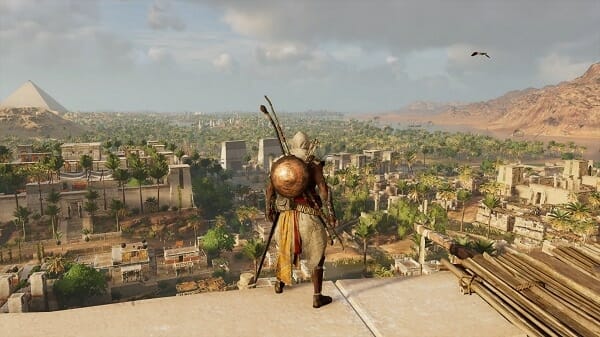 On the bare surface, Origins certainly looks like any other Assassin’s Creed game ever made.  You have a hidden blade (eventually). There are still climbable buildings. Synch viewpoints and stealth kills exist here too.  It may look like your standard Assassin’s Creed game. However, it certainly doesn’t play like one. 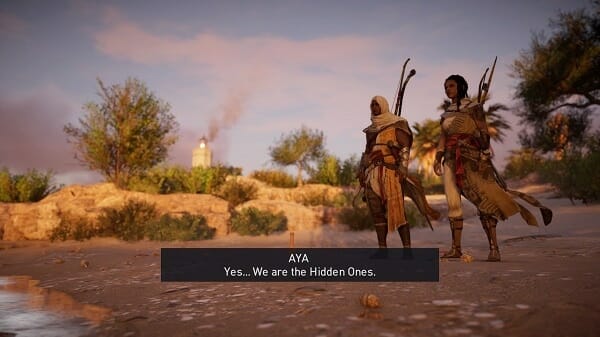 In Origins, you play as Bayek of Siwa, Bayek being his name, and Siwa as the land of his birth. He is a Medjay, a type of police officer/problem solver within ancient Egypt. It’s explained, in some backstory sequences, that Bayek and Aya’s (his wife) child was killed while they stumbled upon a secret ceremony. Since then, Bayek and Aya have sworn revenge on the masked perpetrators who committed the murder. Alongside this, they also kind of start the Assassin’s Brotherhood.

Sadly, The story has some problems. However, Bayek himself is an interesting character. He doesn’t have the brashness that Jacob, Edward, or Ezio have, but isn’t quite as dour as Connor in Assassin’s Creed 3. Although, He has the familial loss in his history, it doesn’t control his whole personality. The story problems come into play with the big enemies of the game. First of all, they wear masks. So, they have no discernible features, or personality. The cut-scene where Bayek’s son is killed, becomes incredibly hard to follow because it’s just a group of men in a cave, and you have no idea what is happening. This also leads to another problem 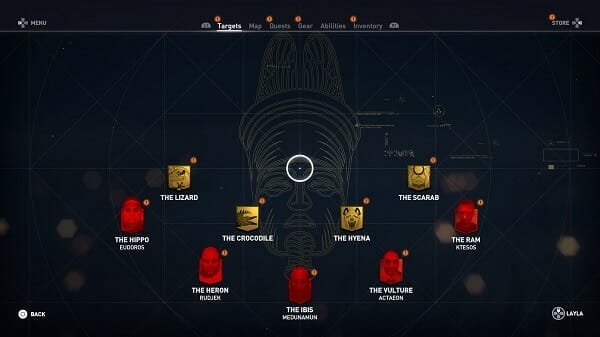 At the start of the game, you are told “kill five targets”, which somewhat goes in sequential fashion. After the five are dead, you are introduced to four more targets. Once they are dead, you get two more, and finally a one last target. This completely undercuts the dramatic tension of the game, because it’s a series of false ends. Heck, even after I completed the main narrative bad guy, the game was like “Nope, here’s another hour for you to kill YET another bad guy!” By that time, I lost interest, and the narrative flow of the game was shattered. Now, lets get onto actually playing Origins.

Past Assassin’s Creed games, up to Assassin’s Creed 2, let you hold in the right trigger (or R2) button, which put you into a combat state. This allowed for blocking of almost any melee attack against you.  Combat was handled only by pressing the square button/X (without R2/RT). With tools being relegated to the Y (or Triangle) button, and you countering with either the Circle (or B), or Square/X button, depending on the game.  They introduced this system in AC2, and expanded it in Assassin’s Creed: Brotherhood. Thus, allowing counters on a single enemy that attacked you. Then, letting you chain instant-kills to surrounding enemies.  This system has existed up until Assassin’s Creed: Syndicate, which changed it slightly, but the basic fundamentals remained the same. 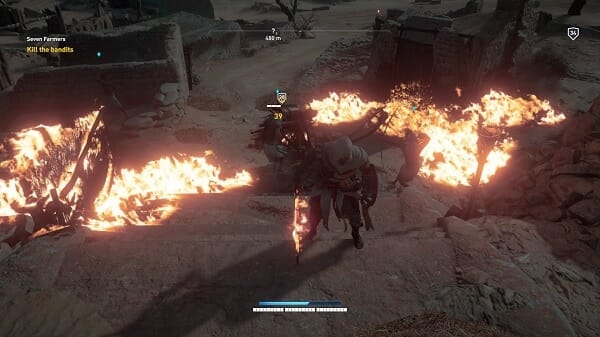 In Origins, combat is completely different.  You no longer have a combat state by pressing R2/RT.  There is now a separate stealth/sneaking state for your character. Giving Bayek movement in a more covert way.  Combat is relegated to the R1 and R2 buttons. R1 serves as a light attack with your melee weapon. While R2 is a heavy attack.  If you hold down the R2 button for a few seconds, it charges the attack up, which causes it to do more damage and break through enemy defenses. Pressing R1 and R2 together when the adrenaline meter is filled, creates a super attack. L1 brings up your shield, which helps guard against melee/ranged attacks.  Square is used as a quick side-step, in the direction you are facing. While triangle is used for smoke bombs, though the timing is pretty fiddly.

To say this changes the game completely, is a dramatic understatement. Combat is now a much more involved affair. Since you not only defend against attacks, but also break through enemy defenses, and have to figure out which attacks you want to use. Then, there’s the weapons, which present their own huge variable as well. 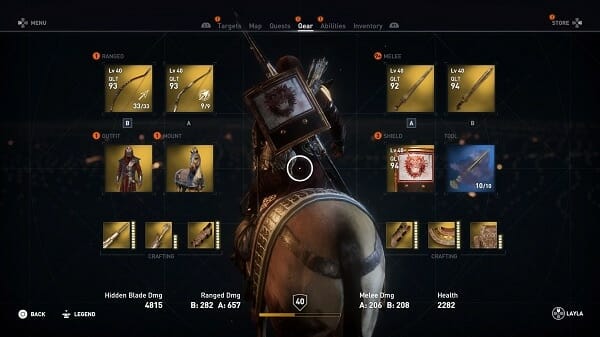 Weapons have certainly been expanded in AC Origins. You have a large arsenal of weapons in the game such as: normal swords, dual swords, spears, maces, and more. Plus, You also have access to different types of bows too. They also have their own firing variables. One is more balanced. While another allows for first person shooting. There’s also a rapid fire bow, and so on. Each weapon type behaves differently, so it’s up to you on what you prefer.

Weapons and gear are color coded like in most Role-Playing Games. Although, here it is blue for common, purple for epic, and yellow for legendary. A common weapon has only one modifier on it. While an epic has two, and a legendary has three. Weapons, bows and Shields all fit into these groupings. Expanding it even more are modifiers, which vary from life-steal, adrenaline on hit, combo multiplier, and even being perpetually on fire. You can also upgrade gear, armor, the hidden blade, and arm gear, to give you more health, or allow you to dish out more damage.

One oddity is that outfits also have rarity associated with them. Only, it doesn’t actually do a damn thing. Outfits are purely for cosmetic purposes, which makes them worthless. Hell, even Syndicate had stats/abilities tied into different costumes. 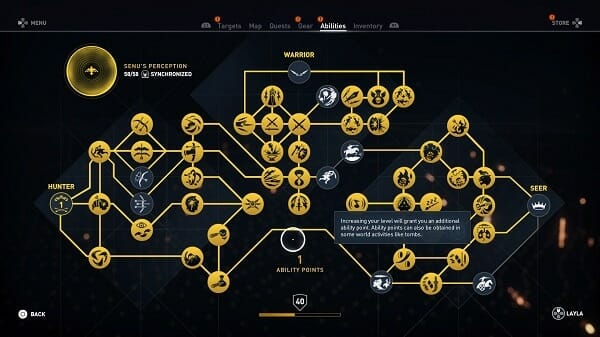 New to Origins is a straight up leveling and gear system. Past games certainly had leveling systems, but not like this. Origins is much more of an RPG than any past Assassin’s Creed game. There are three trees for putting in skill points. Warrior (melee), hunter (ranged) and seer (tools). Each of them unlock different attributes and upgrades for your character.

The truly new thing for Origins, is character levels being a hard number. If Bayek is at level 5, and you try taking out a level 30 guard, prepare to get your butt kicked in one shot. With virtually no damage done as well. This also ties into the stealth system too. If you try to assassinate a high level enemy with Bayek at a lower level, you are just going to bounce right off them.

Changes For the Better?

Honestly, I’m not sure all this is a good or bad change.  While the embracing of RPG aspects is mostly good, except the weird thing with the outfits. The changes in combat are a tad more questionable. The positive is, it makes combat more active. However, only when fighting against a single enemy.  I say that because you’ll often come across groups of enemies, which causes the combat to fall apart. Mainly, because you can get knocked out of your attack animations.  If you come up against seven or more enemies, you’ll likely be stun-locked by everyone swarming you, which then leads to you dying a lot more than in previous games.  Eventually, the combat also gets boring.  You either just hack-and-slash away at normal enemies, or charge your weapon for the brutes/shielded enemies, so they get knocked down. There is not a lot of variety offered by the enemies.

Another odd exclusion, is how the Animus works.  In past games, there was a glossary of buildings, important people, and general history of the land you were given. While also finding out facts about what your quest involved.  Origins has almost none of that, short for a few scant sentences about each target.  The start of the game has you in a tomb you’re meant to escape. But, the game provides no context for it.  After escaping, you meet up with a friend, who only sticks around for about five minutes, and then disappears.  Near the end of the game, he comes back and is killed.  I completely forgot he was even a character, because why should I bother remembering someone who is barely even mentioned?

This happens with Bayek’s wife Aya as well.  You do actually play as her occasionally during the game. Mainly, in some naval sequences that are highly reminiscent of the combat in Assassin’s Creed IV.  She’s also the big motivator for finding new targets.  Here’s a humorous example of Bayek and Aya’s conversation: “Hey, I killed everyone who was involved in the death of our son,” and she says “Nope, here’s more people to go and kill.”  It’s a nice idea that Bayek has a relationship, and isn’t as alone as prior AC protagonists. However, it just rings hollow because Aya is barely in the story.

Graphics And The Map 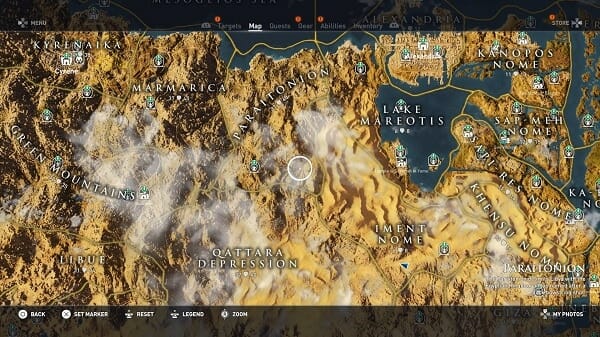 Overall, Origins is a damn nice looking game. While faces are fairly ugly, the in-game world is spectacular looking. Not to mention, it may have some of the best water I’ve seen in a game. Each area of the map has an associated level with it, which is a good blueprint of what you can/cannot accomplish.  Speaking of the map, it is MASSIVE in size and scope.  It blows any previous Assassin’s Creed map out of the water, and might honestly be the biggest open-world landmass in an Ubisoft game.

Ubisoft also takes a page from another game in it’s arsenal, with the hundreds of enemy camps, animal caves, and treasure places for you to explore and complete, it feels far more like a Far Cry game. While you also have an enemy-marking controllable eagle, just like in Far Cry: Primal.

The plethora of things to do in the game becomes overwhelming quickly, much more so than in other games.  That’s not even counting the side quests. Where there are dozens of chariot races, gladiator fights, and animals to kill and skin.

Other issues And Oddities

Aside from combat problems, a story that is borderline nonsense and too much to do in the game, that is the same, Origins suffers some other hurdles that crop up.  I’m not going to go into overt detail, but here’s a list of things I notice:

A few videos of the game having some odd glitches, one involving a death, and one showing some weird texture work:

Overall Thoughts: 7 out of 10 I spent upwards of 65 hours playing Assassin’s Creed Origins. For the most part, I enjoyed my time with it, despite itself in some cases.  The core gameplay is fun. And while all the combat changes don’t entirely work, it still remains fairly true to past games.  What isn’t really forgivable though is the half-written story and shoddy conspiracy that drives Bayek. This game is supposed to delve into the start of the Assassin’s Brotherhood. However, instead, it comes across in a lame cut-scene that is given no context. Ultimately, Origins is an enjoyable experience, but Ubisoft has done better in the past.